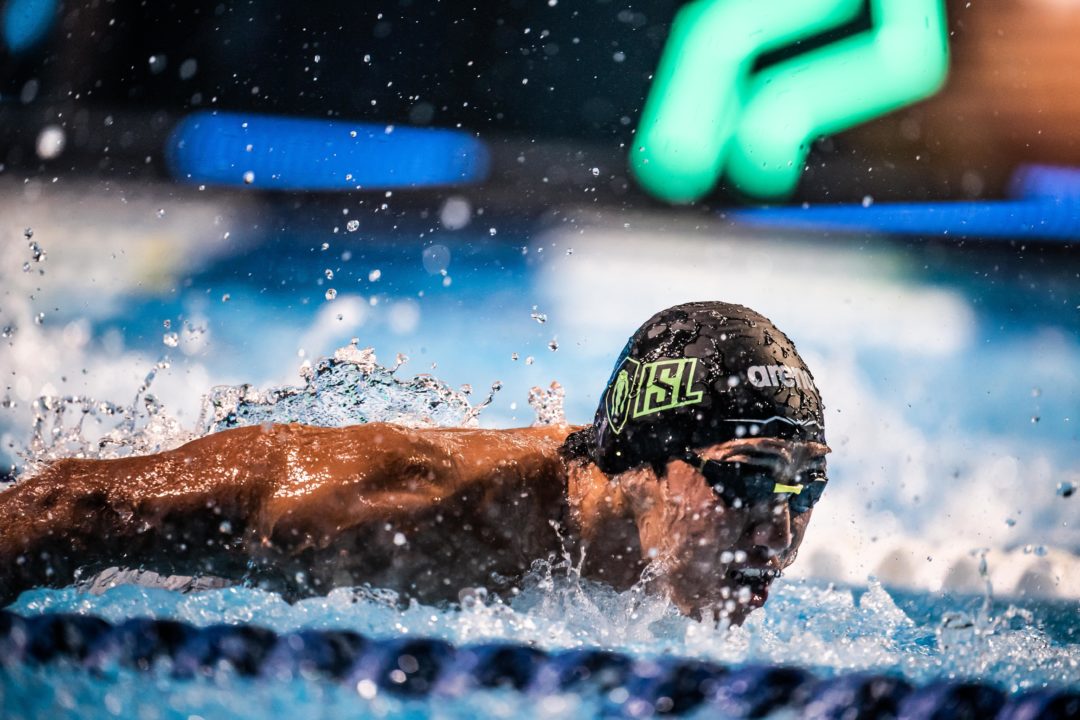 Takeshi Kawamoto tied the longstanding Japanese national record in the 100 fly in semi-finals but it all comes down to the final tonight. Archive photo via Mike Lewis/Ola Vista Photography

An incredible six men dipped under the 52-second threshold in this extremely close men’s 100m fly final. Led by Naoki Mizunuma, a trio of swimmers also got under the Japanese Swimming Federation (JASF)-mandated qualification time of 51.70 needed to book a ticket to Tokyo for this summer’s Olympics.

Mizunuma opened in 23.85 and closed in 27.18 to check-in with the fastest time of his career of 51.03. That sits just .03 outside the national record, a mark which stands at 51.00 from both Kohei Kawamoto from 2009, as well as Takeshi Kawamoto from last night’s semi-finals. As such, Mizunuma is now the #3 performer all-time in Japan.

Tonight, Kawamoto placed 2nd in 51.25 still well under the QT to join Mizunuma in the event on the Olympic roster.

Although the odd man out in 3rd place, the 200m free winner here, Katsuo Matsumoto, busted out a mark of 51.67 to also get under the QT.

With so many 51-point times, this Japanese final wreaks havoc on the season’s world rankings, with Mizunuma now inserting himself into the #3 spot with his teammates following.

The 24-year-old posted a winning effort of 2:09.47, sitting just .07 shy of the Tokyo qualifying mark. Her time tonight checks-in as the 2nd best of her career, positioned only behind the 2:09.44 she produced at the 2018 Pan Pacific Championships. That result rendered her as Japan’s 9th fastest performer all-time.

Behind Konishi this evening by over a second margin was Marina Fubuyashi in 2:10.82, while Sayaka Akase hit 2:11.69 to round out the top 3.

Surprisingly, Natsumi Sakai raced well off the mark, posting just 2:12.14 to fall to 4th place. Sakai had already gotten under the Olympic QT earlier in the season, owning a time of 2:09.32 from last December’s Japan Swim. Beyond that, 19-year-old Sakai has also proven she’s fully capable of producing an Olympic-worthy time as the teen logged a result of 2:08.12 to take silver at the 2018 Asian Games.

This extremely close 800m free race was a dual between two women, as Miyu Namba and Waka Kobori wound up at the wall just .06 apart. Namba touched first in 8:26.61 followed by Kobori’s 8:26.67, with both women qualifying for this summer’s Olympic Games.

Kobori lurked at the side of Namba the entire race, keeping pace less than half a second behind for the majority of the battle. She turned it on at the end to nearly catch Namba, with both women producing lifetime bests in the thrilling contest.

Entering this meet, 18-year-old Namba’s career-quickest was represented by the 8:27.24 she logged en route to taking silver at the 2019 FINA World Junior Championships. As for Kobori, the woman had been as fast as 8:27.08 from just this past February. The women now flip-flop positions on the list of all-time Japanese performers, with Namba at #2 and Kobori at #3.

Both Namba and Kobori have already qualified for the Olympic roster in the 400m free earlier in the meet. Chnatsu Sato wrangled up another 3rd place finish, repeating her placement from that 4free race.

In another remarkable milestone along her journey back to form, 20-year-old leukemia survivor Rikako Ikee claimed the top seed headed into tomorrow night’s 50m free final.

Tonight Ikee clocked a time of 24.87 to represent the sole swimmer to get under the 25-second threshold, inching her way toward the 24.46 JASF-mandated Olympic qualifying time. En route to landing lane 4 for the final, Ikee established a new University Student Record with her swim.

Does anybody know it Kohei and Takeshi Kawamoto are related? Is Kawamoto just a common name in Japan, like Smith or Johnson in the US?

No. Their surname writes differently in Japanese, although both pronounced as Kawamoto.

At this point, I’m strongly considering purchasing an island, making it a country, and filling my country’s Olympic swimming roster with Ikee et al. These mandated Olympic qualifying times keeping potential medalists at home are driving me nuts.

It’s cheaper to buy a spot on the Russian team

It would be too late, as the athletes would have to live there for 6 months out of a year before Tokyo.

But maybe in time for Paris! You’d have to build a really sick pool though.