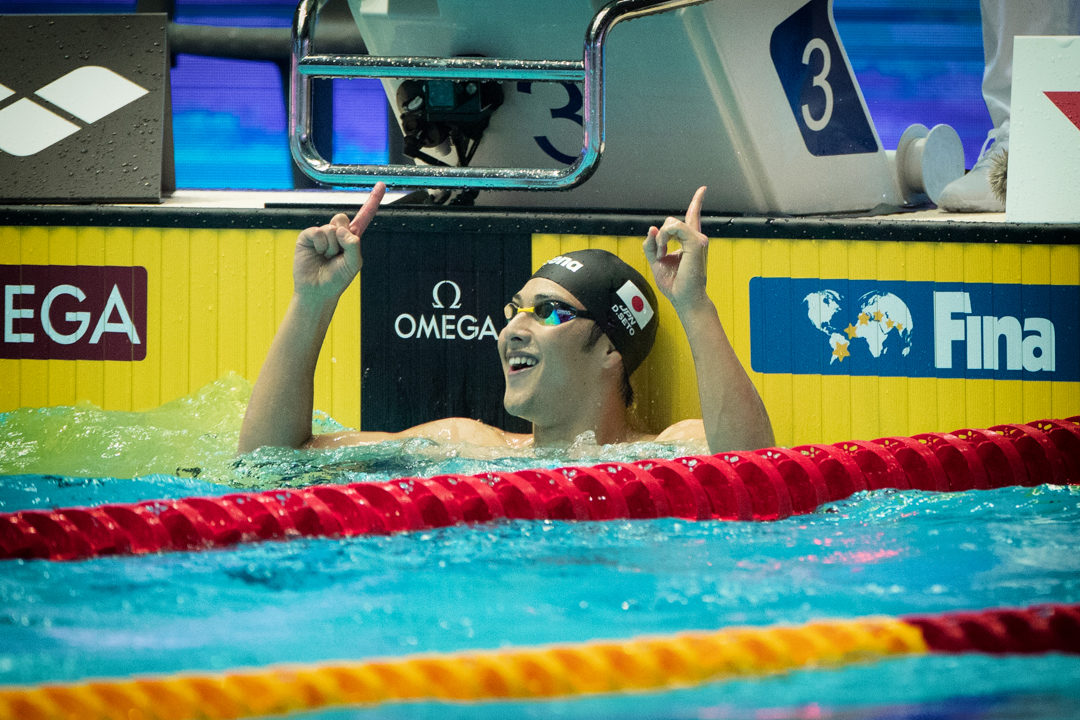 The Japanese Swimming Federation has just released the selection criteria for the 2020 Summer Olympic Games set to be hosted in Tokyo. Archive photo via “Rafael/Domeyko Photography”

The Japanese Swimming Federation has just released the selection criteria for the 2020 Summer Olympic Games set to be hosted in Tokyo and the qualifying times are indeed tough.

As with the 2016 Olympic qualifying standards, the federation incorporated what it took to final in the previous year’s World Championships (2019) when determining its Olympic minimum time requirements, which means the standards are truly meant to select those Japanese swimmers most likely to final in each event, as opposed to just representing the nation by getting up on the blocks in the Olympics.

Exceptions to the aforementioned practice are the women’s 200m fly and 400m IM events, which saw the FINA A cut used as the QT as opposed to the time needed to make the top 8 in Gwangju. This is because just 4:38.93 was needed to final in the women’s 400m IM at this year’s World Championships, while a time of 2:09.06 made it into the women’s 200m fly final. Both of those marks are slower than the respective FINA A time standards for the Olympics of 4:38.53 and 2:08.43.

As with 2016, there is one sole qualifying meet for swimmers to obtain these cuts, which is represented by the Japan Swim scheduled for April next year. The top 2 swimmers achieving, at minimum, the ‘dispatch II’ standard seen below (3rd column are men’s times; 6th column are women’s times) will be considered for selection.

Reviewing the time minimums set forth below, there are a few especially challenging marks for the Japanese swimmers. For instance, the QT of 7:48.12 in the men’s 800m free is quicker than the long-standing Japanese National Record of 7:49.65 Olympian Takeshi Matsuda put on the books way back in 2009.

For the women, in Rikako Ikee‘s absence, the sprint free events may potentially pose a risk of non-individual qualifiers. Only 3 Japanese women have ever broken the 25-second barrier in the 50m freestyle, with Ikee holding the NR at 24.21 and Miki Uchida nailing 24.95 back in 2015. Rika Omoto is an up-and-comer who has made some waves, but her 24.97 career-fastest from this year still sits over half a second away from the 24.46 QT.

The 100m free is potentially even more of a challenge, with the Japanese Federation-mandated qualifying time of 53.31 a tall order for the nation that has only ever seen 2 swimmers enter sub-54 second territory in the event. One again, Ikee holds the national standard in the women’s 100m free at 53.03, while Uchida swam as fast as 53.88 in her career.

The nation does hold promise in the likes of Omoto, Aya Sato, Tomomi Aoki, and Rio Shirai, however, with each of these young sprinters stepping up as of late. Although the top time among the group is 54.18, which entails a huge leap to the 53.31 QT, all have put up their career-quickest in 2019 as a good indicator of their trajectory.

As a reminder, Daiya Seto has already qualified for the 2020 Tokyo Olympic Games in both the 200m IM and 400m IM by nature of his gold medals in Gwangju at the World Championships. As reported, any Japanese swimmer who collected individual gold at Worlds earned automatic qualification in the same event at the Olympic Games.

However, Seto is still required to compete at next year’s Japan Swim, where he’ll most likely also contest the 200m fly to attempt qualification. The QT of 1:56.25 is a feat Seto should easily obtain, having already taken bronze in Gwangju in a scorching 1:53.86.

As for relays, the Japanese women’s 4x100m freestyle squad finished 7th in Gwangju, while the medley relay placed 6th, both of which dipped under the QT listed below. With a top 10 finish at Worlds, these two relays should appear in Tokyo.

However, even though the women’s 4x200m free relay indeed placed 8th in Gwangju, the time of 7:56.31 was well off the 7:52.50 QT listed below. We’ll have to see what the Japanese Federation does in terms of qualification should the women still not hit the mark with collective individual efforts next April.

For the men, the medley relay came in 4th at this year’s World Championships, while the 4x100m free relay finished 9th. Both relays finished in the top 10 and also within the Japanese QT below. The 4x200m free relay, however, falls into the same boat as the women, with the 9th placed squad’s time of 7:09.23 falling short of the 7:08.31 QT.

The qualifying times are not only fast, they defy convention. 😉

It would be lovely if we could get a translation on the time sheet. I seriously almost just thought 46.96 in the men’s 100 free was a time standard…

Ugh I didn’t read the whole article, darn it. I’ll go back to my corner

I’ve never agreed with any criteria harder than the qualifying times. If you make those times you are already a screaming fast swimmer. If there is a financial reason not to send more swimmers than figure out the cost and let those athletes try to pay themselves.

Right. The “A” qualifying times almost guarantee you a semi-final appearance (for those events with semi-finals, of course), and are close to a top-8 finish. The “B” times are a different story, however.

Japanese swimmers have a history of doing fast times in the April qualifying meet and not matching it at the big event. I see an acceleration of this trend for the home Olympics because the ridiculously tough standards makes the risk of doing a partial taper too great, even for the top swimmers.

Why would you do a partial taper if you have 90+ days between events?

So if Sun Yang gets his Worlds win revoked, does Katsuhiro Matsumoto get a free pass to Tokyo as the defacto World Champion?

That’s a good question, and not one that we found an answer to in the criteria. I suspect that’s something that Japan will deal with if Sun’s medal is stripped.

Japan is continuing the trend of NSOs implementing draconian time standards then crossing their fingers hoping it all works out. Tough time standards would make more sense if the swimmers were given a wider window to achieve them instead of a single chance in April. Sure, it would make a domestic trials meet less exciting but might make for faster Olympic swimming if OQTs could be achieved at other FINA approved meets.

Absurd qualifying times – it feels like they don’t want to show the best of the best by reenforcing the level through which
swimmers have to go through . Bizarre & questionable Governing Japanese Swimming federation .

This makes perfect sense if you want your swimmers to peak at trials instead of the Olympics.

There’s really no reason they can’t peak for both if Trials are in April.