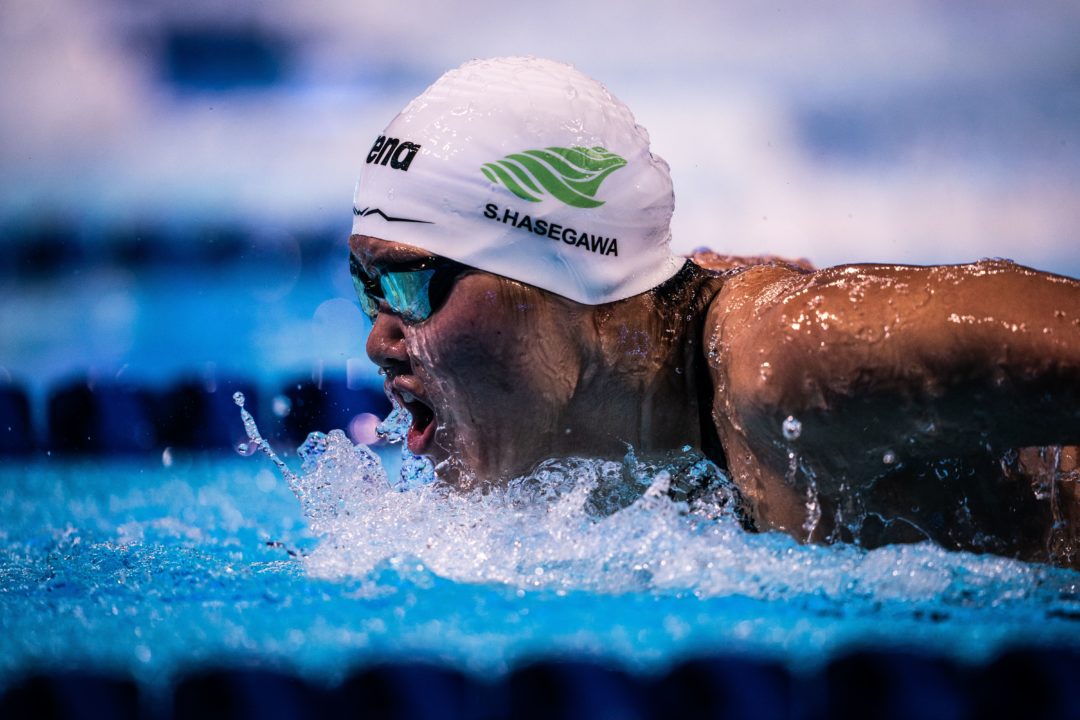 Japan's Suzuka Hasegawa will seek to advance to the women's 100 fly finals during night 1 finals of the 2021 Japan Olympic Trials. Archive photo via Mine Kasapoglu

Having already qualified for the Olympic Games by way of his 2019 World Championships title didn’t stop Daiya Seto from putting on a show in the men’s 400m IM. After establishing himself as the top-seeded swimmer of the morning with a heats time of 4:12.67, the 26-year-old fired off a world-class 4:09.02 to easily take the meet title and further solidify himself among medal contenders at the home-based Games this summer.

With Seto already having booked his Tokyo ticket, the battle was really for runner-up in this race and Yuki Ikari stepped up big-time. Hitting the wall in 4:11.88, Ikari dropped over half a second off his previous lifetime best of 4:12.54 to snag silver. His mark tonight also dipped under the Japanese Swimming Federation (JASF)-mandated Olympic qualifying mark of 4:15.24, making Ikari the 2nd man to be added to the Olympic roster.

Ikari was the 2019 Summer Universiade (World University Games) champion in this event, but most looked to either Tomoru Honda or Ippei Miyamoto as the most likely candidates to clinch the 2nd Olympic roster spot. However, with his 4:11.88 time tonight, Ikari remains Japan’s 5th fastest performer all-time and now an Olympic team member.

Seto now checks-in as the top swimmer in the world this season, owning the only sub-4:10 mark on the planet. Ikari inserts himself onto the rankings list in slot #4.

Falling painstaking shy of the 3:46.34 JASF-mandated Olympic qualifying time, Ryo Nakajima topped the men’s 400m free field tonight in a mark of 3:47.00. Taking over the lead from Shui Kurokawa at the 200m halfway point, Nakajima scorched his previous lifetime best of 3:49.01 from last October’s Inter-Collegiate Championships.

In fact, Nakajima’s 3:47.00 outing here, although non-Olympic qualifying, checks the 22-year-old in as Japan’s 4th fastest performer all-time in this event. Runner-up Kurokawa’s 3:47.58 time also made some noise, making him the 6th fastest Japanese man ever. Both now rank among the top 10 performers in the world this season.

A remarkable 3 women got under the JASF-mandated threshold of 4:38.53 needed to qualify for Tokyo, led by national record holder and World Championships medalist Yui Ohashi.

Controlling the race from start to finish, 25-year-old Ohashi dropped over a second off of her previous season-best of 4:36.27 from February’s Japan Open. She now bumped herself up one spot in the world rankings to sit only behind Aussie Kaylee McKeown.

Tearing up the pool on her way to 2nd place in the race was high schooler Ageha Tanigawa, who seemingly came out of nowhere tonight to upset Sakiko Shimizu as the 2nd Olympic qualifier. Entering this meet, Tanigawa’s personal best in this 4IM event rested at the 4:39.39 she posted in September 2019 as just a 16-year-old.

Less than 2 years later, Tanigawa busted out an Olympic-qualifying time and one that would have rendered the teen as the 6th place finisher at the 2019 FINA World Championships. She now becomes the 8th fastest woman in the world this season at just 18.

Shimizu did get under the 4:38.53 Olympic mark so, if Ohashi or Tanigawa for some reason opt out of this event, the veteran would indeed get a spot.

Post-race, Ohashi told Asian media, “I’m very happy to be an Olympian. But, I’m not satisfied with the time. I was nervous and stiff.”

As for Tanigawa, she said, “I still can’t believe it. The Olympics have been a dream since I started swimming. I am so happy.”

20-year-old leukemia survivor Rikako Ikee has just made the women’s 100m butterfly final at this Japan Swim, clocking a semifinal effort of 58.48 to capture the 3rd seed. She’ll be chasing leader Suzuka Hasegawa, who leads the pack in 58.30, just .02 ahead of Ai Soma.

The contestants will not only be seeking the top 2 placements at tomorrow’s final but they’ll also be striving to achieve the stiff JASF-dictated Olympic-qualifying standard of 57.10.

For perspective, just one Japanese woman has ever gotten under that 57.10 mark and that is Ikee. She owns the national record in a stunning 56.08, although her even making the final after spending most of 2019 in the hospital undergoing intense treatments is an inspirational feat in itself.

Staking his claim on the men’s 100m breaststroke was 19-year-old phenom Shoma Sato. Sato topped the men’s field with a 59.18 scorcher, his best time to date.

Entering this meet, Sato’s PB rested at the 59.55 he logged last October. However, tonight, splitting 28.16/31.02, Sato singed that outing to remain the nation’s 3rd fastest man of all-time and the 6th fastest swimmer in the world this season.

Although historically stronger in the 200m breast, holding the top time in the world and one of the fastest performances ever in 2:06.74, Sato now enters the conversation for 100m breast medal consideration. That is, provided he can replicate this type of performance come tomorrow night’s final.

Also in the mix are runner-up Ryuya Mura, dropping .02 from his previous career-best, while mainstays Ippei Watanabe and Yasuhiro Koseki lurk in the final as well.

Does anyone know if the Japanese have to hit their qualifying standards in the final, or is it enough have done it in the earlier rounds?

Must be in the final for automatic qualification.

Then we got the Lochte comebac

Never have I felt more proud of someone that I’ve never met she’s truly a star, the fact that she’s contending so well amongst the top gives me hope for other races too even if she doesn’t make the 100 fly cut

Any word on the results of day 1 prelims at the russian trials?

I fear for the 200 breast world record after Sato smashed his 100 breast PB. 2:06.12 is a big ask, but he is the one (obviously apart from Chupkov) with the best chance to get there in my opinion.

I don’t know when this happened but he’s swimming for the Japanese self defense force now. Maybe the change in training is affecting him?

Sato could well become the first man to break 2.06 this week.

His 1breast sure looked good!