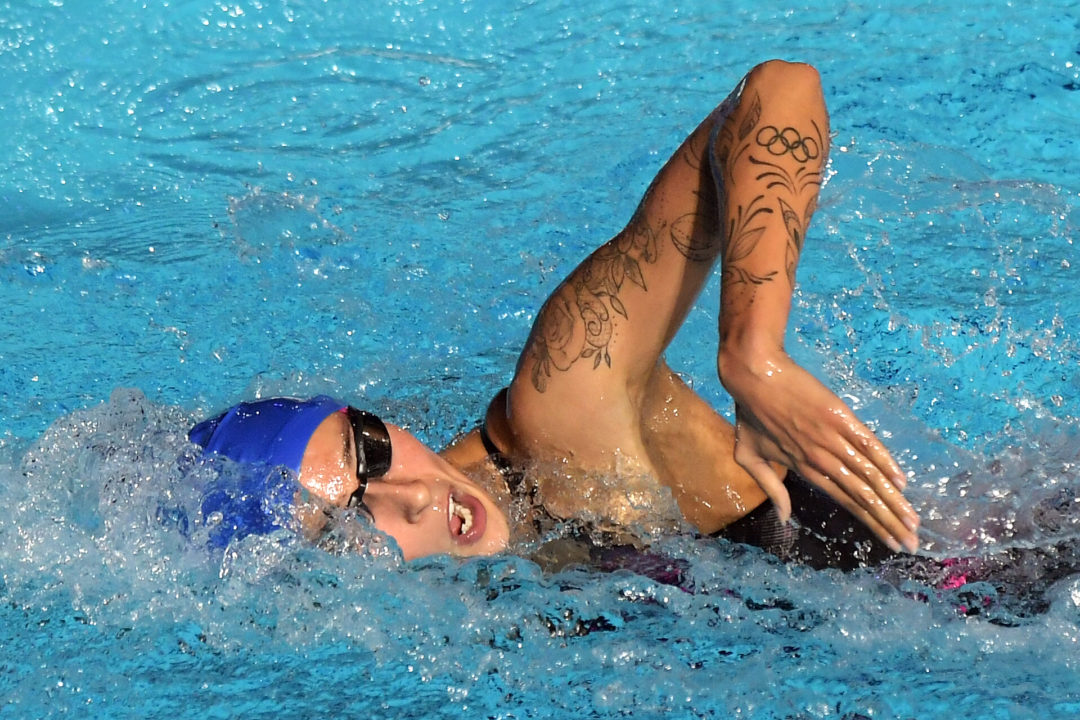 Follow along here for live coverage during the second night of racing during the 2021 French Elite Swimming Championships. Archive photo via Gian Mattia D'Alberto/LaPresse

After three swimmers managed to qualify for the Olympic team on day one, follow along live as we find out how many will make the cut today.

The swim for Muller was just over the qualifying standard for Tokyo which sits at a 16:21.21 meaning that she most likely won’t qualify for the Games.

In the men’s 50 breaststroke final, Theo Bussière couldn’t quite get his hands on the wall in time to pick up his second win of the meet as Antoine Viquerat managed to get to the wall first.

Also trailing the record, Theo Bussiere hit a 27.89 to take the silver medal which is just over his best time in the event of 27.60.

Carl Aitkaci also managed to dip under 28 seconds with a 27.93 for bronze and Julien Valour followed with a 28.08 for fourth place.

Swedish swimmer Louise Hansson was a bit faster than Gastaldello here and exactly matched the FINA A standard with a 1:00.25. Hansson, who was already qualified to race in Tokyo the 100 butterfly could potentially be named to the team for the 100 backstroke based on this performance.

Joining Gastaldello on the podium will be Analia Pigree for silver, having posted a 1:00.50 which was just 0.25 over the Tokyo qualifying standard. In third place here was Mary-Ambre Moluh with a 1:01.47.

That time for Moluh was a bit slower than her morning swim of 1:01.17 which was actually a new French national age group record.

Fanny Deberghes took the gold medal here with a 1:08.76 which is an improvement upon her prelim swim of 1:09.61 but remains well above the Olympic-qualifying standard of 1:07.07.

Justine Delmas matched her 2nd place finish in the prelims here with a 1:09.42 to clinch silver. That’s a slight improvement from prelims as well, getting down for the 1:09.98 that she hit in the morning.

Chloe Braun rounded out the podium here with a 1:10.55 for bronze. Considering that no one got under the qualifying standard, it is unlikely that we will see a French woman race the 100 breaststroke in Tokyo.

It looks like Mewen Tomac and Yohann Ndoye Brouard are officially headed to Tokyo as they become the first 2 swimmers of the session to get under a French Olympic qualifying standard during day 2 of this meet.

Tomac and Brouard were actually both under the cut this morning as well but were both quicker in the final.

Both showed their potential to swim faster at the recent 2021 European Championships where Tomac posted a 52.86 and Brouard a 52.97.

The bronze medal here will go to Geoffroy Mathieu who swam a 54.44 for third place while Stanislas and Huille took the 4th place spot in a 54.57.

Russian swimmer Anna Egorova posted the fastest time of the session in the women’s 400 freestyle with a 4:09.49, shaving a couple of seconds off her morning swim of 4:12.25.

That swim for her trails her current PB and Russian record of 4:04.10 which she hit back in April of this year at Russian Championships. Egorova is slated already to race the event in Tokyo this summer and recently won a silver medal at the 2021 European Championships with a 4:06.05.

Taking the gold medal here, however, was Fantine Lesaffre who posted the top time amongst French women with a 4:15.35. That was faster than her 4:20.50 morning swim in the event but was not under the 4:07.90 Tokyo qualifying cut.

Lesaffre will likely not race the event in Tokyo but did qualify to swim the 200 IM for France at the Olympics.

Joining Lesaffre on the podium was Marie Kuntzmann with a 4:18.16 for the silver medal and Valentine Leclercq who swam a 4:18.80 for bronze.

Texas Tap Water, once all the stars are not competing anymore then it leaves a giant hole.
Since 2014 it’s tough. But we see new talents emerge for Paris 2024.

When did French swimming start to regress? They were really good in 2012.

Will David Aubry compete in the 1500m heats this week ?

It was boring today.
Goodbye.

Fantine Lesaffre is national champion in 4.15.35.

15 years ago Laure Manaudou broke the mythical 400 free world record of Janet Evans at these French championships in 4.03.03.
Then Camille Muffat. Then Coralie balmy.
The French women’s 400 free has moved backwards so much.
It’s hard to watch.

At least you had a girl born in 2005 going 4:18, maybe she can become good. Also what is up with Egorova competing at your championships? Does she train in France?
I wish we (Germany) could trade with you. We give you a distance freestyler (male or female) and you tell us your secret formula to develope world class sprinters …

Egorova has been swimming with Lucas for years…

Interesting to see that Laure has the 1500 record as well as the 100 back. Does she own the 50 back as well ? I guess the situation must be almost similar in Hungary.

As good as she was at middle distance freestyle, Manaudou was actually the second person ever under 1:00 in the 100 back behind Natalie Coughlin. They both did it in this race. Imagine what she could have done if she’d learned to streamline properly.
https://youtu.be/zVKkFN5hRSg

Brouard has a 2m10 wingspan. He looks crazy tall in the water.
Mark my words. He wins the gold medal in Paris.

Uhm, three years are a very long period in Swimming, but I would bet 1 cent to Kolesnikov for the 100 back gold (I know that the magician Hunter Armstrong is too strong, so off-category).

Sorry, but way too early for a prediction like that. He has the potential to do it, but the same is true for many other guys (there are 16 or 17 year old guys in South Africa and Australia going 53 mid). Ndoye Brouard, Marchand and Grousset look like your best bets for Paris, not sure if you have anyone on the women’s side? What happened to the girl who won gold in the 50 fly at the 2019 european junior championships?