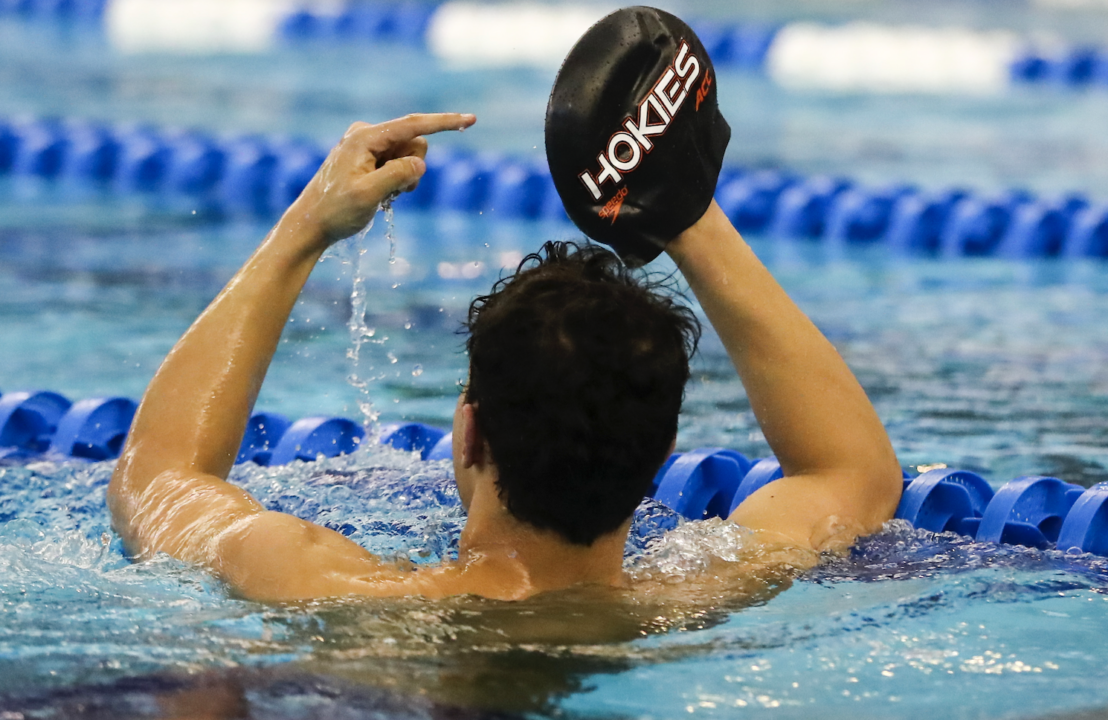 The Virginia Tech men return all of their NCAA qualifiers after finishing a program-best 11th place at the 2021 NCAA Championships. Archive photo via Jaylynn Nash, the ACC

The Virginia Tech men seemed to be hitting their stride in their third year under head coach Sergio Lopez. Buoyed especially by some key international recruits, the Hokies broke a bevy of school records, pushed established conference powers like NC State and Louisville at the ACC Championships, and had their best showing ever at the NCAA Championships.

At ACCs, freshman Youssef Ramadan clocked a 44.3 in the 100 fly, making him the fastest freshman in history. While that was VT’s only conference win, the depth netted them five relay ‘A’ cuts, and kept them within 100 points of the champion Louisville Cardinals, taking third.

Those successes gave the Hokies momentum heading into NCAAs, where they scored the most points (135) in school history and also walked away with the highest team finish in school history (11th). Butterflier Antani Ivanov led the way individually with a pair of A-final appearances in the flies. Ramadan scored 18 points between the 50 free and the 100 free, but missed out on the chance for an NCAA title after he drew a disqualification in prelims.

All told, the Hokies downed school records in all five relays plus numerous individual events en route to arguably the most successful in team history.

In terms of individual scoring, the key name is here is Youssef Ramadan. The Egyptian Olympian made the 50 free A-final at NCAAs, finishing 8th, and added in a 10th-place finish in the 100 free, netting a total of 18 points between those two events.

Fifth-year grad student Tommy Hallock returns after qualifying in the 50 and 100 freestyles last season and having been a lynchpin of the Hokie relays over the last few years.

The Hokies rely on stroke specialists Carles Coll Marti and Antani Ivanov to fill out their relays, but butterflier Blake Manoff placed 2nd in the 200 free at ACCs with a 1:32.63, and made the A-final in the 100 free at ACCs as well.

There’s some depth among the Hokies’ freshmen too. Spanish native Luis Dominguez‘s meters times suggest he could make an immediate impact on the free relays. Ben Eckerson, Hayden Jay, Nikolas Lee-Bishop, and Jacob Ryan all have 50 free times of 21.0 or better, giving Sergio and staff plenty of sprint talent to work with.

Virginia Tech’s distance group took a fairly big hit here when 2019 NCAA scorer Lane Stone only competed in a few meets last season, and did not compete at all in the postseason. Stone was a senior last year, and theoretically could’ve come back for a fifth season, but he doesn’t appear on the Hokies’ roster for this season.

The Hokies did manage to get some ACC A-final points in this discipline, however, thanks to Ivanov’s 4th-place in the 500 free. He qualified for NCAAs with a time of 4:14.92, but didn’t swim this event at NCAAs, instead focusing on the 400 medley relay, where he split a swift 44.2.

Brennen Doss and Filip Dal Maso provide a little depth, both scoring in the 1650 at ACCs, but neither was within 25 seconds of the NCAA qualifying time.

The bad news here is that the Hokies only had one man, Sam Tornqvist, compete in the backstroke events at 2021 NCAAs. The good news is that he returns as a fifth-year grad student. Last season, Tornqvist finished just out of scoring in the 100 back, placing 21st with a 46.31, but took 12th in the 200 with a time of 1:40.54.

Lopez, the 1988 Olympic bronze medalist in the 200 breast, has amassed one of the more potential-laden breaststroke groups in the country.

Keith Myburgh, primarily an IMer, added a swim in the 200 breast, and Lopez’s son Cobi made the C-final in both breaststroke events at ACCs.

The Hokies have quietly been building one of the better butterfly groups in the nation, and last year turned out to be a breakthrough year for the group, even if there was a bit of disappointment at NCAAs. Freshman Youssef Ramadan sparkled in his first ACC Championship meet, breaking the 100 fly conference record with a stunning 44.32. Ramadan’s DQ at NCAAs cost the Hokies a likely 15+ points, but he should be a solid bet to make the A-final this year.

Meanwhile, Antani Ivanov made the A-final at NCAAs in both butterfly events, finishing 6th in the 100 fly (44.67) and 3rd in the 200 fly (1:39.26) after finishing 2nd in the latter event at ACCs. Dylan Eichberg earned NCAA swims in both fly events as well, grabbing two points with a 15th-place finish in the 200.

Coll Marti, Pouch, Tornqvist, Eichberg, and Myburgh all swam the 200 IM, with Eichberg leading the pack in prelims with a 27th place finish, while Coll Marti had the fastest time of the season at 1:43.47 at ACCs. Del Maso and Myburgh both swam the 400 IM, finishing 34th and 27th, respectively.

The Hokies didn’t qualify any divers last season, and their leading ACC diving scorer, Noah Zawadzki, does not appear to be returning for a fifth year.

Thanks to Hallock’s return for a fifth year, the Hokies are in the enviable position of returning all 20 of their NCAA relay legs.

The quartet of Manoff, Ivanov, Coll Marti, and Tornqvist took 2nd at ACCs and 10th at NCAAs in the 800 free relay, highlighted by Manoff’s 1:32.2 leadoff at ACCs and Ivanov splitting 1:32 at both meets.

Three of those four also swam the 400 free at NCAAs, with Ramadan subbing in for Tornqvist. Ramadan, Hallock, David Herbert, and Manoff return for the 200 free relay. Those relays should remain fairly stable, although there is a chance that one of the freshmen, especially Dominguez, could make an impact.

The bottom line is that the Hokies’ relays — again, all of which set school records last year — are in great shape, and should once again rack up the points at NCAAs.

The Hokies appear to be trending upwards and are poised to run it back with largely the same team as last year, even if there aren’t any mid-season additions. They’ve got elite talent in guys like Ivanov and Ramadan, and plenty of supporting characters. The ACC has become increasingly competitive, but the Hokies should at least be in the mix for a second-place finish there, and they seem primed to make another run at the top ten at NCAAs.

Great to see Tech on the upswing, and with several local Virginia swimmers along with the international talent. I’d bet on continued improvement at NCAAs for the next few years.

He certainly had an effect on Conger and Schooling this last go round.

I speculate Schooling is a motivation issue (He has never been the same since his Rio gold) and I’m sure his father’s death was a factor. I wonder what happened to Conger. He had a poor showing at OT.

Annie Lazor made the Olympic team after her fathers passing..

Well good for her. I’m no Schooling apologist but that doesn’t mean anything. Jesus what an insensitive comment to make.

Downvote me all you want Hswimmer, you’re a terrible person.

This is such an incredibly disrespectful and low class comment to make. Because one swimmer is able to swim well after losing her father that means everyone should. Not everyone handles grief the same way

Hswimmer you’ve always been one of the worst commenters on this site. This one, though, is a whole new level – even for you. I bet even hiswimfan or drswimphil wouldn’t upvote this trash comment.

You have a link?

The juice is loose babyyyy

I would say they have the best fly group in nation

Next year they get three MONSTER butterfliers coming in (Landon Gentry, Will Hayon, and Carl Bloebaum)

The ACC butterfly events are going to be incredibly loaded between these guys, Albiero, and the NC State crew

What is the “Sergio effect” on the women’s team?

They made a pretty significant jump at both accs and ncaas

Could also read the pattern as:

Doh!! Little details I missed. every other year…..hence why I wasn’t so good at the SATs!!