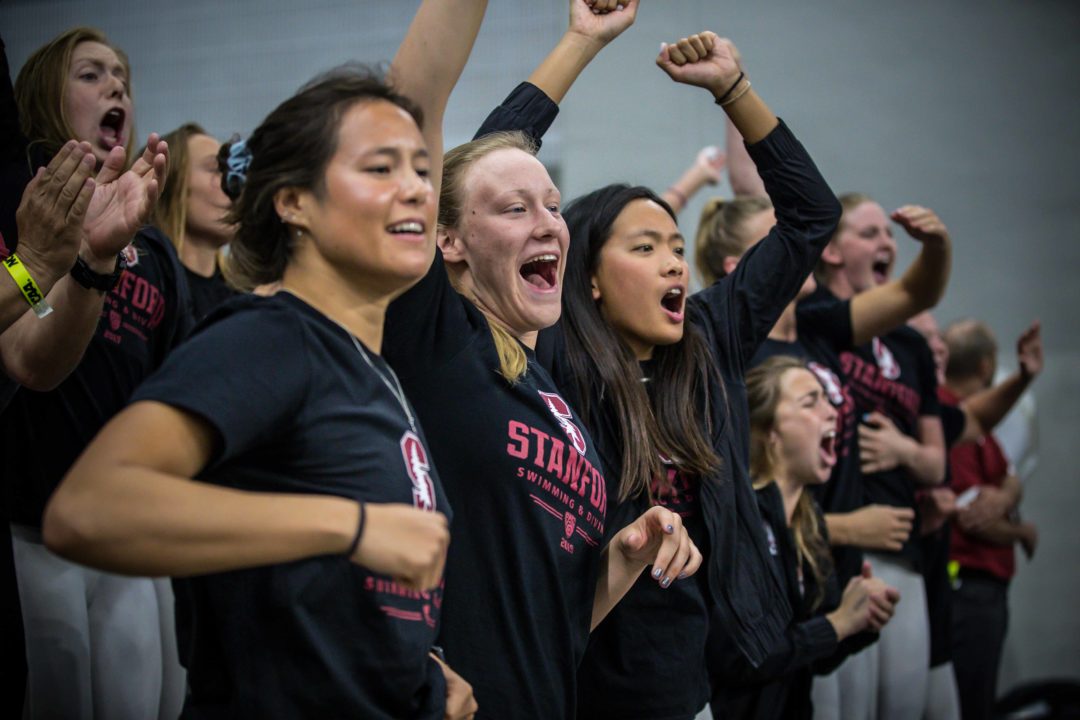 In which we totally overreact to swims from night one. Current photo via Jack Spitser/Spitser Photography

Night one of the 2019 Women’s Division I NCAA Championships is over and done with, which means we can do what sports fans often do best: overreact to a very small sample size. So, based on exactly one swim, let’s see who looks like they hit their taper.

A few swimmers stood out Wednesday night in that they outperformed their 2018 relay 800 free splits by a wide margin, or met high expectations.

Three of Stanford’s four swimmers also seem to be in good shape, taper-wise. Ella Eastin improved on her 2018 NCAA time by a tenth (1:41.13 vs 1:41.03), and over half a second off her Pac-12 split. And while Brooke Forde technically did not go faster than her season-best split (1:41.70), she did accidentally finish to the foot and do an extra 50, and was still under her NCAA time from last year (1:42.94 vs 1:42.37) – it still bodes well. Finally, freshman Taylor Ruck lived up to enormous expectations. We said that she could fill the void left by Katie Ledecky on this relay, and she sure did, throwing down a 1:39.83 split in her first-ever NCAA appearance.

Similarly, Louisville’s Mallory Comerford went the fastest relay split in history last season (1:39.14), and basically matched it tonight (1:39.19), and Siobhan Haughey gained a few tenths on her 2018 time, but was still a very solid 1:40.98 tonight. They’re also off to a good start.

Let me repeat myself: we are likely attributing way too much to tonight by generalizing a single performance to an entire meet’s outlook. Nonetheless, here are a few swimmers who underperformed either based on last year’s swim or expectations we’ve built over this season.

Tennessee’s Erika Brown, whose meteoric rise to sprint stardom came to a head with a 1:40.68 anchor split at SECs last month, split 1:43.37 Wednesday night en route to her team’s 18th-place finish. Do we throw in the towel on her meet? Of course not. But it could indicate she peaked too early.

Below, we’ve done the math on how 800 free relay teams performed based on their seed time. The teams are sorted by how much they over- or under-performed based on entry time (a negative difference means the team went faster than its seed time).

Looks to me like all four Texas swimmers swam slower this year than last, assuming that paragraph is written correctly.

“In which we totally overreact to swims from night one.” I love this…

Interesting article. Thank you for the synopsis…PLEASE keep them coming on all relays and if time/energy permits individual events? Or at least top 16 seeded individuals.