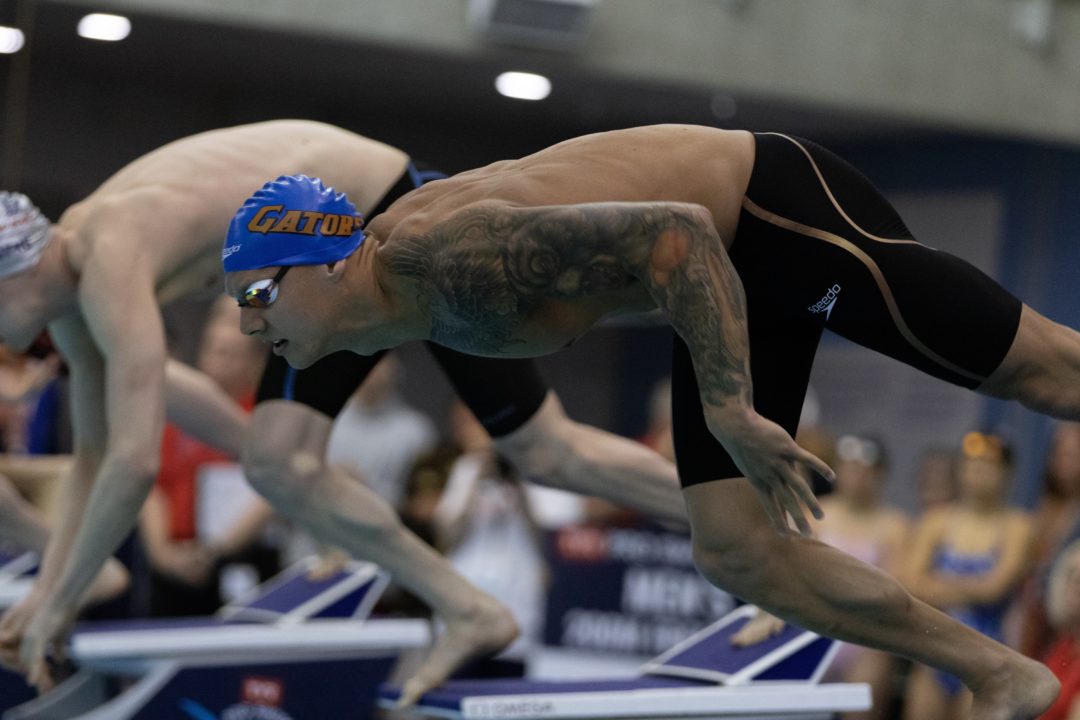 Watch all the race videos from day 3 of the 2019 Richmond Pro Swim Series. Current photo via SwimSwam

Hali Flickinger held off Katie Drabot and Kelsi Dahlia in the last 100 of the race, earning the win in a 2:07.03. Flickinger knocked off 0.06s off her season best of 2:07.10 and ties herself as the 2nd-fastest time in the world with Japanese swimmer Yui Ohashi.

Chase Kalisz was even with Bulgarian Antani Ivanov heading into the final 50. However, the 20-year-old Ivanov held off Kalisz into the finish with a now 16th-fastest time in the world (1:56.34). Kalisz settled for second with a 1:57.03.

Out of lane 7, Olivia Smoliga pulled out the win over Simone Manuel and Farida Osman. Smoliga’s winning time of 24.83 just put herself in the top 20 times this year. Manuel and Osman tied for second, both sub-25 with a 24.97.

Both Michael Chadwick and 4th-place finisher Jack Conger tied or bettered their personal bests. For Chadwick, he tied his 2016 Trials PB with a 21.96. For Conger, he swam a new personal best with a 22.41.

Just 14 minutes after winning the 50 free, Olivia Smoliga surprised herself with a new PSS record and personal best time, winning in a 58.73. That is now the 3rd-fastest time in the world this year behind Canadians Kylie Masse and Taylor Ruck.

Annie Lazor continues her thrilling year, winning yet another PSS 200 breast title with a 2:23.22. Her PB from Des Moines of 2:22.99 remains the 4th-fastest time in the world. In a tight race for second, Bethany Galat turned it over and passed up Emily Escobedo to out-touch her by 0.23s. Both their times just entered the top-25 times in the world.

Josh Prenot use his lethal back-half to pull away from the field and win with a comfy time of 2:11.51. This is Prenot’s 2nd PSS 200 breast title after winning in Knoxville. Runner-up Nic Fink was the Des Moines title winner and finished this time with a 2:12.15.

Egyptian Farida Osman had a stellar 50 fly final tonight, breaking Kelsi Dahlia‘s PSS record with a 25.65, maintaining her #2 spot on the top-10 times in the world. Dahlia settled for second place with a 25.90.

For 14-year-old Claire Curzan, her 3rd-place time of 26.18 was nearly two-tenths faster than her prelims time of 26.37. Her time is also the 15th-fastest time in the world this year and the 9th-fastest U.S. performer all-time.

Caeleb Dressel has officially went 2-for-2 tonight with his win in the 50 fly. This is also his second time defeated Michael Andrew tonight, out-touching the 19-year-old phenom by 0.11s. Dressel’s time is the 12th-fastest time in the world this year. Andrew was the Des Moines winner of this event, where his winning time of 23.36 remains the 7th-fastest time in the world.

Swimming the 2nd-fastest time in the world, an unsual position for this star, was Katie Ledecky. Her winning time of 4:01.50 is just 2 seconds off of Aussie Ariarne Titmus’ leading time of 3:59.66. Leah Smith‘s second place time of 4:05.17 bumped her up from 15th to 5th in the world this year. Third-place finisher Kaersten Meitz took third with a 4:09.20, just sneaking into the top-25 times in the world.

Picking up his 5th PSS win was Denmark-native Anton Ipsen, who held off Zane Grothe 3:48.22 to 3:48.53. In Des Moines, Grothe out-touched Ipsen and took the win. But this time around, Ipsen was able to hold and maintain his lead. Both Ipsen and Grothe’s times are right outside of the top-10 times in the world this year.

Ipsen is also qualified for the 2019 World Championships this summer, scheduled to swim the 800/1500 free and 400 IM for Denmark.

but she didn’t win.

CD and MA are great sprinters, but neither of them has a beautiful freestyle stroke.