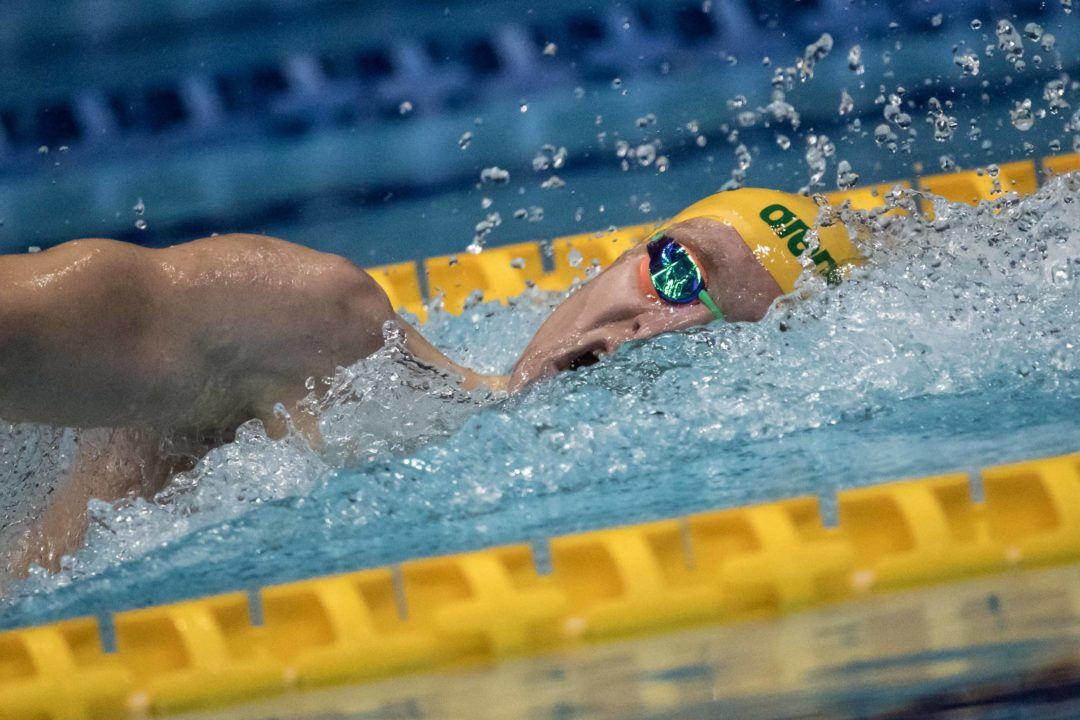 As you can read more about in our specific post here, 25-year-old Emma McKeon busted out her best 200m free time ever, clocking 1:54.55 to deny Ariarne Titmus her 2nd event win here in Brisbane. Instead, McKeon took her 2nd gold of these Trials, doubling up on her 100m fly World Championships qualifying effort from night 1.

McKeon split 55.35/59.20 to beat out even the 1:54.92 that earned her the bronze in this 200m free at the 2016 Olympic Games, making this her fastest performance in 3 years. She now moves into the 2nd slot in the season’s world rankings, only behind Titmus’ 1:54.30 newly-minted National Record she produced in April at Australian Nationals.

Shayna Jack missed out on individual qualification in this race, but put up the best time of her career in a bronze medal-worthy swim of 1:56.37. That hacked .4 off of her previous best ever of 1:56.77, a mark established as lead-off on on the St. Peters Western women’s 4x200m freestyle relay that won gold at Nationals.

Finishing 4th tonight for a relay spot in Gwangju was 23-year-old Western Australianer Brianna Throssell, the former fly specialist who finished 8th in the Olympic 200m fly final in Rio. Since, Throssell has been turning on the jets in the freestyle events, in addition to keeping up with fly, churning out a new personal best tonight.

Throssell’s 1:56.62 marks just the 2nd time ever the UWSC athlete has been under 1:57, giving Australian another powerful weapon in its 4x200m freestyle arsenal.

Shaking up the all-time Aussie list, Jack now enters the ranking as the 5th fastest ever, while Throssell now becomes the 7th fastest Aussie in history.

Things looked a little bleak after this morning’s prelims of the men’s 200m fly, with the fastest mark sitting 2 seconds off of the World Championships QT of 1:55.58. But, the men turned it on in the evening, led by Olympian David Morgan of TSS Aquatics.

Morgan earned a morning swim of 1:58.55, but hacked over 3 seconds off of that mark tonight to take gold in 1:55.26. That cleared the Gwangju QT set by Swimming Australia of 1:55.58 and punches the 25-year-old’s ticket to next month’s World Championships. His outing checks-in as a new personal best, beating the 1:55.63 he notched back in 2016 at his nation’s Olympic Trials.

His quickest in the past 18 months was the 1:56.36 he put up on the Gold Coast for Commonwealth Games silver, so the man threw down when needed to make it happen in tonight’s final.

Fellow Olympian Grant Irvine was right there with him, but ultimately finished just outside the Worlds QT in a still-solid 1:55.89. That’s within range of his 1:55.32 PB from way back in 2013 and crushes the 1:56.91 he produced last year on the Gold Coast for 4th behind Morgan at the Commonwealth Games.

Matthew Temple of Nunawading dipped under the 1:57 threshold for the first time of his career, nailing a new PB of 1:56.58 for bronze tonight.

Irvine now sits as the 6th fastest swimmer in the world this season.

Taking control of the men’s 800m free and never looking back was Olympian Jack McLoughlin, the 24-year-old Chandler standout who busted out the fastest time of his career tonight for the win.

Entering the meet, McLoughlin’s season-best was the 7:55.81 he produced at the Sydney Open meet last month. His fastest ever was the 7:47.31 he punched in Tokyo at the 2018 Pan Pacs for bronze.

As such, his mark tonight dips under the 7:47 threshold for the first time ever, crushing next closest competitor Josh Parrish, who registered 7:54.94 for silver, while Olympian Mack Horton missed another qualification opportunity with an 8:01.30 for bronze. Horton was 7:53.42 last year at Pan Pacs, for perspective.

McLoughlin’s time keeps hi as the 5th fastest Aussie performer in history, while he moves into the current world rankings at #7.

USA will break the WR

My money is on them swimming in that order as well

It doesn’t look at all promising for Mack Horton. He’s way off his best. What’s up?

He’s had consistency issues his whole career, but yeah, this is not a great showing.

In my opinion he hasn’t been the same since winning gold at Rio. Probably this is what he needs to do to work hard again. He used to at least swam really good at trials

Those women I would give them a slight edge over team USA right now. Their two fastest beat USAs two fastest. It probably comes down to who has the faster 3rd or 4th legs. Aussies don’t have any backups but USA can line up 4 girls in the morning and pick the two best. USA needs to have Schmidt swim in the morning to earn her spot. We don’t need a repeat of what happened last year. You have to wonder what is Ledeckys potential in the 200 right now I don’t think she is much better than 1:54.50, she has never approached the speed she showed in the 4×100 relay when she went 52.60 rolling start in Rio.

The us will have the faster #3 and 4 legs but the aussies have an advantage on the top 2, at the moment. Should be a god race. I’d be more confident if the Americans if they were picking the team this summer…. but Leah Smith looks pretty good this year, too.

Mc Laughlin , Smith & Ledecky are locks for me on this summer’s relay ….who will fit the last best leg is the real question ….Comerford ? Margalis ? Schmitty ?

Both Jack, who has improved her time in the 200 by over a second in the last 6 months & Throssell, a butterflyer turned freestyle, (not in Pan Pacs relay team last year) also improved greatly are both getting closer to the 1.55s too.

Tend to agree, Rob. Ledecky can certainly split sub 1.54 but with both Titmus & McKeon at 1.54mid or better, AUS has 2 with sub 1.54 potential (depending on where you place them in the order). Wih Jack at 1.56.3 flat start, there is another potential 1.55 split. Granted, Worlds will be her first outing on this senior relay but that can be balanced with her now being a settled member of the 4X100. The 4th spot is the one with potential doubts with Throssell only having 2018 Comms experience on this relay and Wilson 2017 Worlds. Both produced 1.57 splits on these outings; given both have improved their PBs, 1.56 splits are not outrageous expectations.

Ledecky showed vary fast splits two years in row after Rio. Practically same as at Olympic games. Her double mishaps in the final of individual race remains the mystery. At least to me.

it’s rare in the men’s butterfly in Australia to have a first or second place finisher whose name is not Morgan or Irvine. These two deserve respect for being at the top in their home country for so long but some new blood would be good.

Temple’s PB is a definite step in the right direction.

Agree with Loretta that Temple’s showing may be a positive omen that someone may crash the Morgan/Irvine party … and maybe surpass them. Chalmers may be the X factor in the 100FLY on the final day of this meet

CommonWombat – I am stoked to see what Kyle can do.

With Temple, Gough and Brown, Australia now have 5 men at 1.56 or better (including morgan and Irvine) which despite what can be read on this site is absolutely miles better in terms of depth and time that Australia has had in a very long time in the 200 fly

Who is FABIAN Wellbrock? Florian!

Due to very slow split of Schmidt which was unusual for USA swimmer in any international meet..

Due to Schmidt trying to stay with Titmus and fading badly at the end.

There was no prelims at Pan Pacs that is how she ended up swimming in finals. I don’t think she will get a pass to finals at worlds unless she does a 155 flat start in the 200 assuming that event is swam prior to the relay.

yes they won but Usa had to deal with a 1.58 from Schmitty …..to recover from . Not easy to win with such a slow leg . I agree , the Aussies are back in full power for a serious battle in the 800 free relay .

Also all 4 US swimmers swam two 200 frees the day before. The top 2 Aussies skipped the individual race entirely, and Groves withdrew from the A final to rest for the relay.

To compete with Australian team Americans need two 1:55 splits in addition to Ledecky’s 1:54 split and somebody else’s 1:56 split. It can all potentially happen with the team like Schmitt – Smith – McLaughlin – Ledecky. But definitely with not 100% certainty.

14
-1
Reply
remel can do anything
Reply to  Yozhik

i think mclaughlin can get the 154 split

7
-9
Reply
ERVINFORTHEWIN
Reply to  remel can do anything

Ledecky went 1:53 in Rio, so she should be able to match that. Somebody always seems to step up in the relays for USA. Who would’ve thought DiRado would put up 1:56 low in 2016. I dont know how much wiggle room usa has with their worlds relay team though…i dont think Comerford or McClaughlin qualified for that relay….would be interested to see one of them in the finals. That being said, the Aussies are the favorite in 800 free relay.

It’s almost a lock that Katie M will swim she just went a 156 in season and she is swimming well. Coaches have full discretion on relays.

I think the US has complete freedom with the 4×200 relay–except that they have to use Gabby DeLoof in either the prelims or the finals.