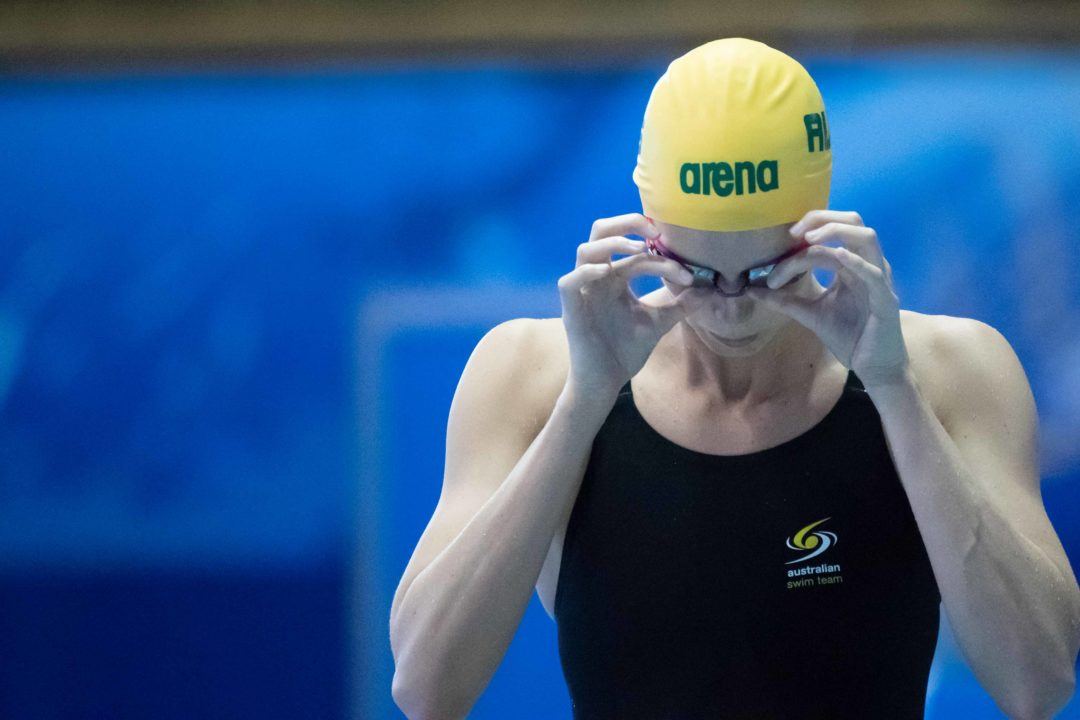 Check out how the Aussies fared on night 1 of the 2019 World Trials, where the best of the best are vying for World Championships roster spots. Archive photo via Mike Lewis/Ola Vista Photography

Not to be lost in the excitement of teen Ariarne Titmus’ statement-making 400m free or Kaylee McKeown’s eye-popping 200m IM PB is the fact that ever-consistent Emma McKeon quietly qualified for the World Championships squad in the women’s 100m fly tonight.

After establishing herself as the top seeded swimmer of the morning in an easy-looking 57.52, McKeon clocked a mark of 57.28 to comfortably clear the 57.64 Aussie-mandated World Championships QT and add her name to the Gwangju roster.  She’d already been well underneath that threshold this season, holding the #2 time in the world of 56.85 from April’s Australian National Championships.

Joining McKeon on the roster in this event is Western Australia’s Brianna Throssell, the 200m fly Olympic finalist who has been making strides both in this event, as well as the sprint freestyles as of late.

The 23-year-old punched a mark of 58.74 to claim the 2nd seed of the morning, but dipped under the 58-second threshold tonight with a silver medal-garnering swim of 57.57. That’s within striking distance of her lifetime best of 57.30 and enough to secure her spot for the main event next month, as well as insert herself into the top 10 performers in the world this season.

Bronze this evening went to 22-year-old Jemma Schlict who produced the 5th fastest time of her career in 59.51.

The men’s 100m breast was without an outright World Championships qualifier tonight, as winner Matt Wilson‘s time of 59.78 was unable to clear the 59.24 needed for Gwangju.

His outing of 59.78 marked the only sub-minute breaststroker of the night, with runner-up Daniel Cave of Melbourne Vicentre also coming up short in 1:00.18. 20-year-old Zac Stubblety-Cook rounded out the top 3 in 1:00.39.

With Wilson’s heroic performance in the 200m breast of 2:07.16 at April’s National Championships, it’s very likely he’ll qualify for Worlds in that event. In that case, Wilson would still most likely be able to race for Australia in this sprint event as he’d already be on the roster.

Entering tonight’s final, it would have taken a huge swim from one of these men to clear the QT, with only 4th place finisher Jake Packard (1:00.42) having achieved that kind of time in his career. Packard’s PB rests at the 59.20 from last year’s Pan Pacs, while the next closest is Wilson who notched 59.67 at the Aussie Nationals to pair with his aforementioned national record.

Entering these World Championships Trials, the younger sister of Olympic finalist Taylor McKeown held a personal best of 2:11.04 in this women’s 200m IM event, a mark clocked just last month at the Sydney Open. Prior to that, McKeown owned a PB of 2:11.50 from the month before.

Flash forward to tonight, however, and the Youth Olympic Games medalist blasted a monster 2:09.94 to not only dip under the 2:10.45 Aussie-mandated QT, but also check-in among the Aussie greats in the vent. Her time tonight situates McKeown as the 4th fastest Australian performer ever in the women’s 200m IM event.

McKeown suddenly sits as the 6th fastest swimmer in the world this season.

Behind McKeown was Western Australia’s Blair Evans who clocked 2:13.55, while Meg Bailey, of St. Peters Western and Ohio State stateside, earned a bronze in 2:14.39. For Evans, she’s more geared toward the 400m IM and will most likely use this event as a primer for that race in which she has a more likely chance of achieving a Worlds QT.

The women continued to put on a show in the 400m free event, with 18-year-old Ariarne Titmus swimming fearlessly to lower her own Australian and Commonwealth Records once again. Entering the meet with a lifetime best of 3:59.66 from both 2018 Pan Pacs, as well as the Aussie Nationals from this past April, Titmus answered Ledecky’s 3:59.28 from last night with a monster 3:59.35 to claim her World Championships spot.

You can read more about Titmus’ remarkable swim here.

However, 22-year-old TSS Aquatics athlete Kiah Melverton also qualified for the World Championships squad with her impressive outing of 4:05.30. That time hacks almost a full second off of her previous lifetime best of 4:06.25 in this event, a time she clocked at last year’s Pan Pacs Trials.

Young Lani Pallister also put up a beautiful swim by way of her bronze medal 4:06.57. Her outing this evening slashes her previous PB of 4:07.76 to bits, with that time having won her Junior Pan Pacs gold. Her time tonight checks her in just outside the top 10 performers in the world in her own right, and also bodes well for her other freestyle events here.

In a somewhat surprising turn of events, just one swimmer dipped under the 3:46.14 Aussie-dictated qualifying standard for next month’s World Championships. 24-year-old Chandler Olympian Jack McLoughlin was the man who got the job done tonight in the 400m free, taking gold in 3:44.34, just .14 off of his Pan Pacs winning lifetime best from last year.

Falling short, however, was Olympic champion Mack Horton, the man who not only took gold in Rio in this event, but followed up with silver at the last edition of the World Championships in 2017 in Budapest. Tonight Horton hit just 3:46.47 to take silver, missing the 3:46.14 QT. You can read more about Horton’s swim here.

Also not making the squad was 19-year-old Bond standout Elijah Winnington, the man who took his first Senior Aussie National title just this past April in this event. There in Adelaide, Winnington won the gold in a monster mark of 3:44.68, a time that would have easily qualified for Gwangju had it been swum this evening.

Of note, coming in a valiant 5th tonight was Rackley 17-year-old Thomas Neill, who dipped under the 3:50-barrier for the first tie in his young career. The emerging freestyler was 3:55.52 in March, which he dropped down to 3:50.99 to take gold at the Australian Age Championships just a month later.

Those are birth years and not dates for the ladies 2IM

So why were people claiming Aussie swimming was dead? These swims look pretty good. I’m assuming Horton is still going to swim this event in Korea .

He didn’t make the automatic selection time, so it’s not a done deal. If he makes the team for the 4×200 he should get to swim it.

And Neill only had his birthday today so has a whole year to improve his ranking. Great swim .

Mentioned in another thread but C Campbell split 23.2 on a masters relay at the end, looking forward to seeing her later in the week!