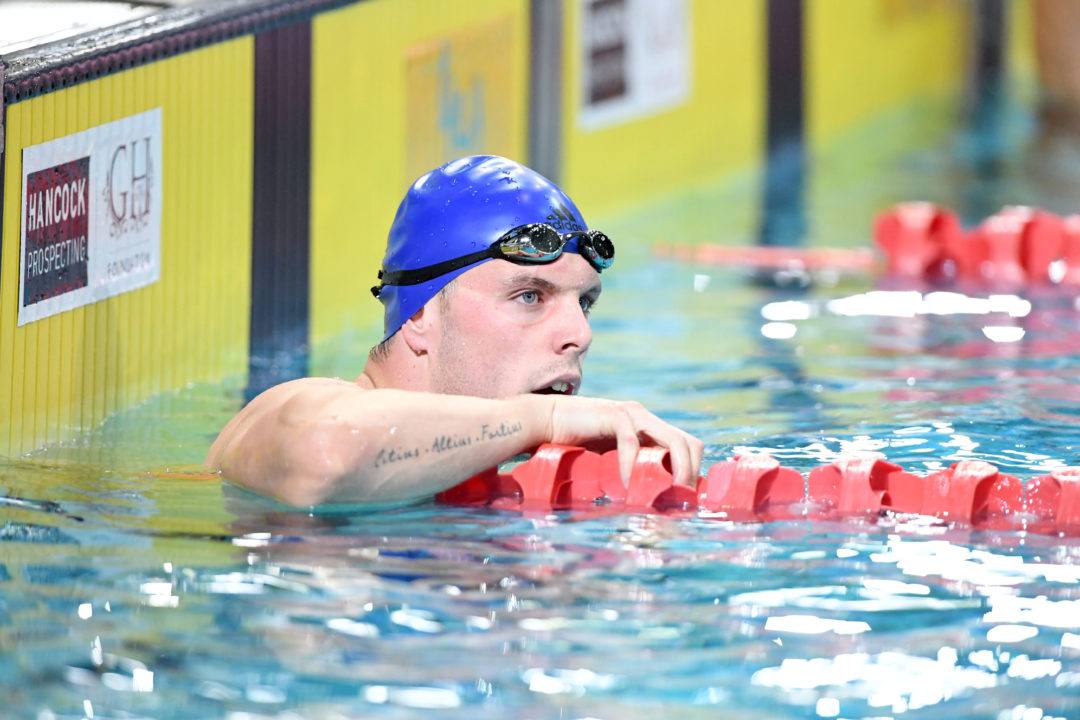 Olympic champion Kyle Chalmers is on the hunt for his first World Championships cut, taking the 2nd seed in the men's 200m freestyle. Archive photo via Swimming Australia, Ltd.

There’s quite the age spread of the top 8 women headed into tonight’s final in the 100m backstroke, with 15-year-old Molly O’Callaghan representing the youngest and 31-year-old Holly Barratt representing the oldest competitor.

First, taking the top seed, is World Junior Record holder Minna Atherton, the 19-year-old Brisbane Grammar training partner of World Champion and Olympic gold medalist Emily Seebohm. Atherton punched the wall in a time of 59.25 to represent the only swimmer of the morning under the minute, mark, but she’ll need to repeat the feat in tonight’s final to qualify for the World Championships.

Atherton has already been as fast as 59.71 this season, having taken the Aussie National title in April. McKeown was 59.88 at that same meet, while Wilson has yet to be under the minute threshold this year.

Seebohm can never be counted out, holding the Aussie National Record in the 58.23 logged back in 2012, while her quickest in recent months was the 58.72 registered at last year’s Pan Pacs for silver behind Canada’s Kylie Masse.

The men’s 100m backstroke saw its expected leader, Mitch Larkin, take to the top seed of the morning, but perhaps the surprise was the 25-year-old’s time. Entering this meet, Larkin’s season-fastest was the 53.51 produced at April’s Aussie National Championships, but tonight he laid waste to that outing with a big-time 53.18.

Splitting 26.16/27.02, Larkin manhandled tonight’s field, with his 53.18 holding over a second and a half advantage over the next closest competitor of Bradley Woodward. Woodward clocked 54.75 to mark the only other sub-55 second swimmer of the field, with veteran Travis Mahoney of Marion earning the 3rd seed tonight in 54.75.

Larkin’s time this morning now checks the St. Peters Western athlete in as the 7th fastest performer in the world this season, giving us a preview into what the 2-time World Champion may have in store come tonight’s final.

Jessica Hansen snared the pole position for tonight’s women’s 100m breaststroke race, although the top 8 played their cards fairly closely to their chests. Hansen earned the top spot in 1:07.33, within range of her own personal best of 1:06.20 logged in Tokyo last year for Pan Pacs silver.

She’ll need to be on par with that performance in order to clinch a World Championships berth, with the Aussie-mandated QT sitting at a stiff 1:06.81. Her fastest thus far in 2019 was the 1:07.48 that earned her silver behind Abbey Harkin at Nationals in April.

Harkin’s time there in Adelaide was 1:07.83, while the St. Peters Western athlete touched the wall in 1:09.08 to claim the 5th seed this morning.

Griffith University’s Georgia Bohl has proven she’s capable of that QT type of time, holding a PB of 1:06.12, although it was from the 2016 Nationals. She wrangled up bronze last year on the Gold Coast at the Commonwealth Games, but mustered just a 1:07.22, a mark about a half a second outside the QT needed for Gwangju. Bohl most recently was 1:08.59 in April for 4th at Nationals.

In the mix is 22-year-old Bond athlete Jenna Strauch, the woman who snared bronze at Nationals in a time of 1:07.79, a lifetime best.

The men’s 200m free is one of the most anticipated finals of these Australian World Swimming Trials, with athletes vying not only for individual qualifying spots, but also a coveted seat on the men’s 4x200m freestyle relay.

The field was fierce this morning, with 24-year-old Alex Graham surging to the top of the pack in a mark of 1:46.14, a new personal best for the Bond athlete. Graham finished 6th in this event on the Gold Coast at the Commonwealth Games, finishing with a mark of 1:47.01 in the final.

That performance fueled Graham to hit an even lower mark of 1:46.35 in the prelims of the men’s 200m free at last year’s Pan Pacs, where he ultimately hit home in 1:46.50 for 5th place, the highest finish of any Australian man in the event in Tokyo. Graham needs to replicate his sub-1:46.28 performance in tonight’s final to seal his spot on the Gwangju roster.

Running right behind Graham, however, is Commonwealth Games champion and Australian National title holder in this event Kyle Chalmers. King Kyle produced an easy morning swim of 1:46.35, splitting 51.95/54.40 to claim the 2nd seed in 1:46.35.

1:46.30 is what the Marion Olympic champion threw down for the Aussie National title back in April, one of four he would win in addition to the 100m free, 100m fly and 50m free there in Adelaide. Chalmers’ easy speed this morning is a good indication that he’s ready to take the meet title once again and punch his ticket to next month’s World Championships.

Challengers for a relay spot include 3rd seeded Clyde Lewis of St Peters Western, who clocked 1:47.10 for 3rd, while the fastest 100m freestyler ever in a textile suit, Cameron McEvoy of TSS Aquatics lurks as the 4th seed in 1:47.43.

19-year-old Bond athlete Elijah Winnington represents the fastest Australia of the 2018/19 season, having clocked a remarkable 1:46.13 for a new World Junior Record back in December at the Queensland Championships. However, Winnington fell short in the men’s 400m freestyle last night, so his performance tonight is something that may be more difficult to predict than originally thought.

Bringing up the rear in the top 8 is mainstay Thomas Fraser-Holmes, the IM specialist who has also been a dependable veteran in this 200 freestyle event. He earned a time of 1:48.55 this morning, but holds a season-best of 1:48.93 to put his name in the hat for a possible relay spot.

The women’s 1500m free will be recapped with tonight’s finals.

No other men broke 54secs tonight including yang and Woodward .. Incerti too Swan a 57!!!

Looks like beaver and treffers both retired now too

The breaststroke woes continue for Australia it seems

Jess Hansen misses the QT by 0.25 in 1:07.06, she’ll probably be added to the team primarily for the medley relay swim then get the individual swim later.
Chalmers and Lewis both under the QT in 1:45.76 and 1:45.88 (PB) respectively. Graham dipped under the QT in 1:46.25 finishing third. Stellar effort for an event with a QT I thought only chalmers would clear. Winnington 8th in 1:47.86.

Atherton and McKeown 1-2, both under the SAL QT. Seebohm didn’t break a minute and came fourth.

Did the stream die for you?

Stream is dead on all fronts and live results not showing finals
edit: is back

What time did Atherton and McKeown do?

Winnington lis ooking in danger of missing the team altogether.. he seems to have missed his taper ? To me he was almost certain to get a spot on the 400m free after blitzing the field in April’s nationals .. It would be a shame if he doesn’t make the team

I hope the times get significantly faster tonight for the finals

That would be very disappointing for him . Shows how rare it is to seamlessly progress to senior . I always think 400 hurdles . Jnr is 300.

If Elijah doesn’t finish at least top 5 of the 200m feee tonight, not sure he will be chosen for the relay duties and he doesn’t have many more events to play with except maybe 100m free

Even though Elijah placed 8th in the final, I believe he will be selected as a relay only swimmer, thanks to his past performances in the event. In saying that, all other 7 swimmers in the final need to be selected to the team too (in 800m relay or other events).

Gonna be hard to justify selecting somebody who finisher 8th at the selection meet when the 7 ahead of him are on the plane, isnt it

Some observations from prelims;
Are we seeing the decline of the great Emily Seebolm? Or she grooming herself one big next go next year?
Larkin looked very good with a 53.18 in the 100 back
We struggle for 100M breaststrokers for both men & women’s 4×100 med.
Great heat swim by Alex Graham 1.46.14, Chalmers has a lot more, Winnington has not back up from national championship.

Jess Hansen has shown significant improvement in the 100 – I wouldn’t say we’re struggling.

Emily has a beautiful beautiful dalmation . Living the best life.

To be honest even if Seebohm is on the decline I’m not really focusing on that anymore as she has already served her country well internationally over the last decade and a bit .. I’m more curious now on the youngsters and specifically Atherton and McKeown.. I would dearly love for them to develop a mini domestic rivalry in the backstroke to keep the backstroke stocks up..we used to have a plethora of backstroke girls in the past who paved the way for Seebohm as well

Atherton did a PB in the 100 back this morning which is the first time since early 2016 she’s done one in this event. Will be interesting to see what she does tonight, whether that’s her peak form at the moment or if she was holding back and can get the QT.

Seebohm had an erratic 2018 and we need to acknowledge she’s been on the intl scene for 12 years so decline is a reasonable conclusion. The issue may be whether its a gradual decline where she is still performing to intl class through to Tokyo OR a sharp one where she’s no longer making the team/QTs. Pleasing performance from Atherton who’s been “drifting” since 2016, can she back this up or even improve tonight ? What may we see from McKeown ?

Larkin looks a “gimme” for qualification; questions are: does he have anything more tonight and can we see another qualifier ?