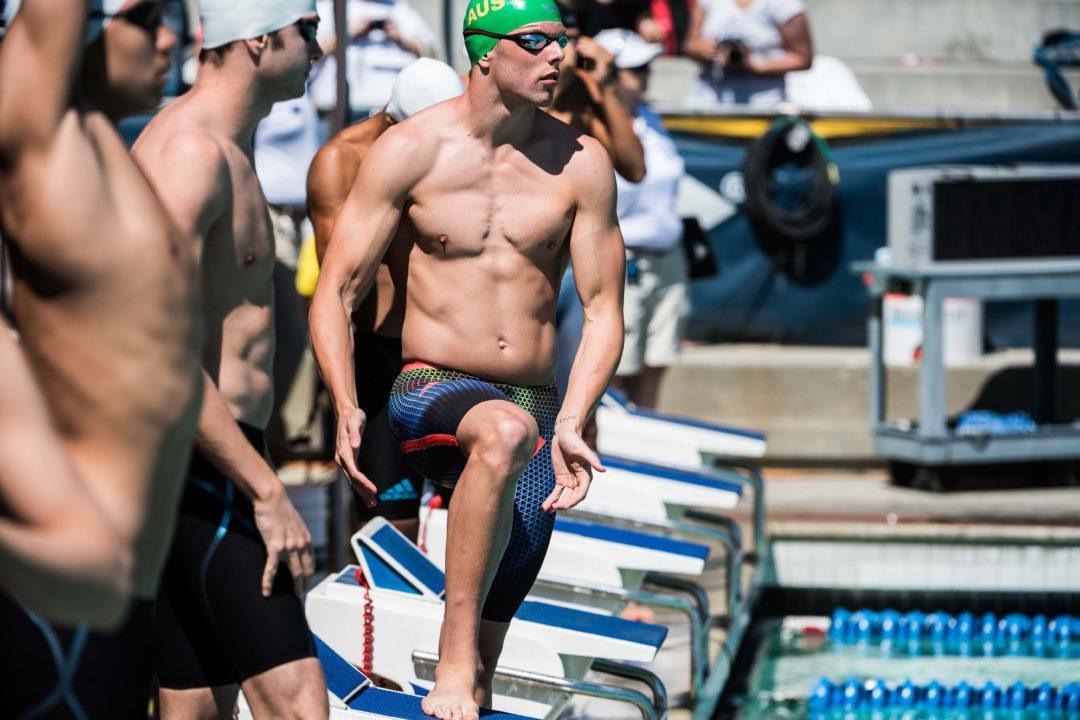 King Kyle Chalmers busted out his fastest 200m free of the season, while Mitch Larkin moves into the 2nd slot among the world's best this season in 100 back. Archive photo via Mike Lewis/Ola Vista Photography

Despite entering this 6-day meet as the top seed and veritable shoe-in for a slot on the Gwangju roster in both backstroke events, World Champion and Olympic medalist Emily Seebohm finished way back in 4th in the women’s 100m back tonight.

Establishing herself as the 2nd seed in a time 1:00.26, Seebohm missed breaking the minute mark tonight, despite having done so more than an almost unfathomable 60+ times in her career. Seebohm wound up hitting the wall in 1:00.29 in the final here in Brisbane.

Taking the meet title was her 19-year-old teammate in Minna Atherton, the 50m back World Junior Record holder who has been making steady improvements over the last year. Atherton took gold tonight in 59.20, slicing .14 off of her previous lifetime best of 59.34 hit just this past April for the Aussie national title, with her outing this evening bumping her into the #3 slot among all-time Aussies in the event.

Atherton’s time clears the 59.82 Aussie-mandated QT needed to make the World Championships roster, as does runner-up Kaylee McKeown.s mark of 59.28. This 100m back is 17-year-old McKeown’s 2nd event for Worlds already, as the teen already nailed qualification in the 200m IM on night 1.

All-Time Aussie Women Performers in the 100 Back

Seebohm’s situation echoes the fate of Mack Horton in the men’s 400m free from night 1, as the Olympic champion missed qualification in that event. Seebohm still has the 200m backstroke event to contest here in Brisbane.

Of note, finishing in 6th in the race was 15-year-old Mollie O’Callagh of St. Peters Western. With her time of 1:01.12 tonight the young swimmer becomes the 4th fastest backstroker ever for her age.

Just 1 man made the mark in the 100m back tonight, but it was a big one. 2015 double World Champion Mitch Larkin crushed his fastest time since that year, hitting the wall for gold tonight in 52.38.

That time easily clears the 53.76 needed to make the World Championships roster, as well as puts Larkin only behind China’s Xu Jiayu in the season’s world rankings.

Post-Rio, Larkin dabbled around in different training groups, first landing on Simon Cusack, then at Commercial, prior to returning back to St. Peters Western to give Dean Boxall a try. Boxall has been making magic happen for freestyle ace Ariarne Titmus and the, by all accounts, unconventional coach has been helping Larkin get back to form.

Larkin was already 53.73 at Aussie Nationals where he took home yet another title, but tonight’s sub-53 mark is a terrific indication of what we may see from the 25-year-old in the 200m IM as well.

22-year-old Bond athlete Jenna Strauch, the woman who snared bronze at Nationals in a time of 1:07.79, a lifetime best, tied that outing this evening for silver.

Both Georgia Bohl and Taylor McKeown were well off the podium in positions 5th and 6th, respectively, in tonight’s final. Bohl has proven she’s capable of that QT type of time, holding a PB of 1:06.12, although it was from the 2016 Nationals.

She wrangled up bronze last year on the Gold Coast at the Commonwealth Games, but mustered just a 1:07.22, a mark about a half a second outside the QT needed for Gwangju. Bohl most recently was 1:08.59 in April for 4th at Nationals.

The men’s 200m free lived up to its billing, with a thrilling battle between Australian National Champion Kyle Chalmers of Marion and Clyde Lewis of St. Peters Western.

Chalmers’ splits tonight include 52.06/53.70. His time inserts Chalmers into the season’s world rankings at #7 this season, with runner-up Lewis right behind in slot #8.

1:46.30 is what the Marion Olympic champion threw down for the Aussie National title back in April, one of four he would win in addition to the 100m free, 100m fly and 50m free there in Adelaide.

Versatile Lewis swam the race of his life tonight to claim the 2nd individual roster spot. Entering this meet,the 21-year-old’s personal best rested at the 1:46.54 established at Pan Pacs last year, so tonight marks his first time ever under 1:46.

This morning it was 24-year-old Alex Graham who surged to the top of the prelims pack in a mark of 1:46.14, a new personal best for the Bond athlete. Graham finished 6th in this event on the Gold Coast at the Commonwealth Games, finishing with a mark of 1:47.01 in the final.

4th place this evening went to Jack McLoughlin in 1:46.82, which means that both Olympic medalist Mack Horton and reigning World Junior Record holder Elijah Winnington are shut out of relay spots.

The top 5 women all cleared the 16:20.98 World Championships qualification mark set by Swimming Australia but all eyes were on the top 2 swimmers tonight as Maddie Gough and Kiah Melverton drew the almost 16-minute race down to the touch.

Gough got the victory in 15:56.39, while Melverton hit the wall just .07 behind in 15:56.46. Both times check-in as personal bests for the pair, with the duo also shaking up the all-time Aussies list.

Gouth now ranks 3rd in the world, while Melverton moves into the 4th slot. Gough originally committed to swim for the University of Wisconsin, but decided to stay home and train under Chris Nesbit at TSS Aquatics, a move that seems to be agreeing with her.

Additionally, 3-time Junior Pan Pacs gold medalist Lani Pallister of Cotton Tree became the fastest 17-year-old Aussie ever in the event, hitting 16:06.84 to clear the previous Age Record of 16:10.11 set by Janelle Elford way back in 1987.

Just in time to choke at Worlds.

He may have something interesting to say in the 200 IM as well.

Won’t medal at Worlds either.

Clyde Lewis (20) first sub-1.46 is a great news for Australia. Graham is very solid and considering Winnington and Cartwright, beside, obviously, Chalmers (terrible that pic’s angle at the start) there’s future for Aussie 800 free relay

The 4X200 certainly looks the strongest of the AUS men’s relays however it has to be acknowledged that this is probably the most open/competitive of the men’s relays ….. and I wouldn’t be inking in any medals just yet. Having said that, it looks to be the case that the previous generation who promised a lot for this relay but were erratic in delivery (McEvoy/TFH/McKeon) look to have been replaced in the pecking order by a new batch/generation who may hopefully prove more consistent.

Russia a little ahead of aus now 0,3 summing up trials
USA must be on the same league
Gbr 2 seconds behind bra 3 unless they flop or Brazil get a surprise like last SC world or gbr throw down a 2017 like result Aus is safe this year at last

Australia will be in contention for winning minor medal….USA is the favourite to win gold.

U got to Put Brazil in the mix for a medal …they are very dangerous since Pan pacs last year . Usa / Russia / Uk / Brazil / AustRALIA , i beleive those 5 will battle hard this summer and next for the medals . Its wide open as COMMONWOMBAT has underlined so well .

In Rio, two of the trio you keep maligning actually delivered. TFH led the off in a smart 1.45.81 while McKeon split 1.45.63. Australia were in line for silver but a painfully slow 1.47.37 third leg from Smith meant that a pretty smart anchor leg split of 1.45.37 from Horton was only good enough for fourth. It’s still a mystery as to why McEvoy was not selected to swim in either the heats or the final of that relay. It definitely cost Australia a medal.

Yes, 3 legs DID swim well in Rio but my point is that the likes of McEvoy (esp with this relay), McKeon & to a lesser degree TFH were often unreliable performers on this relay. McEvoy never split any faster than a 1.46 despite a 1.45 slat start PB and was just as liable to drop a 1.48. Rio was probably the 2nd time in his career that McKeon actually delivered a performance for this relay. Yes, they Could’ve brought in McEvoy for Smith in the Rio final and he MAY’ve swum the house down …… my point is that he was no secure bet and we not know until after he retires the backstory as to why he didn’t… Read more »

You are really under estimaring what TFH has done in this relay over the past few years. He was the only reliable 200 free swimmer that Australia had over the past decade.

I WILL reconsider my initial point and remove TFH from the relay “unreliables” list. However, your contention re “only reliable 200 free swimmer” only holds true up to and including 2014 when we are talking about the individual event. Missed individual qualification for 2015 Worlds and failed to make final in Rio. Hasn’t been sighted since then until this meet.