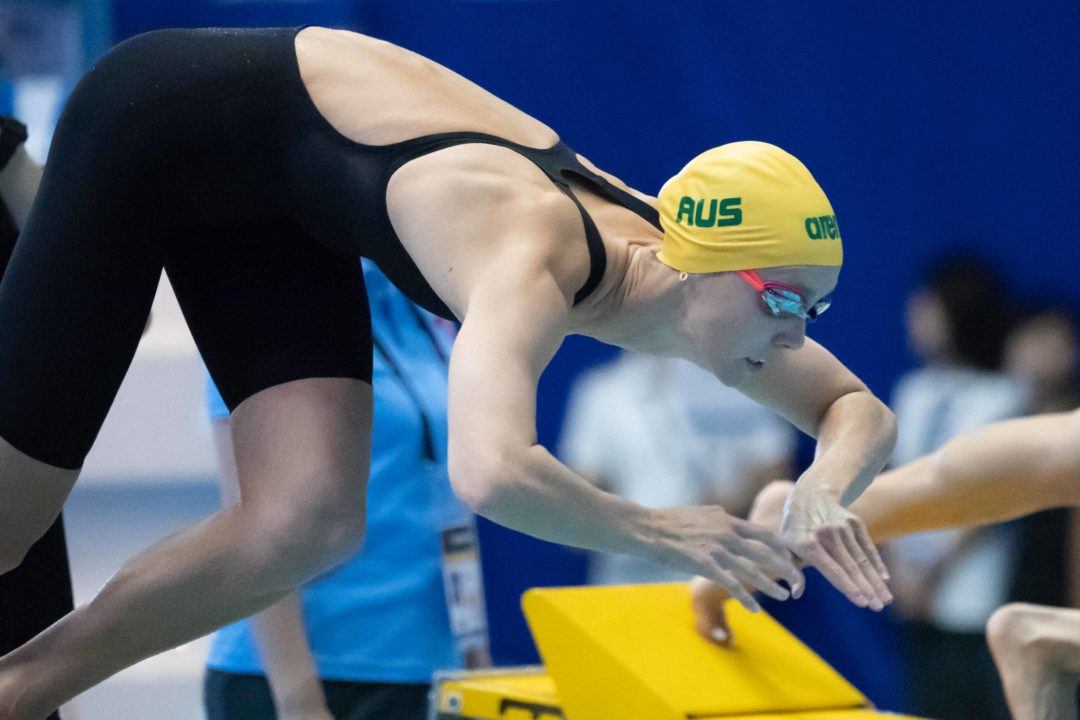 Competing on night 3 of the 2019 Aussie World Trials, the Griffith University star crushed the women’s field on the whole, with National Record holder Ariarne Titmus finishing about a half second behind in 1:55.09, with Shayna Jack rounding out the top 3 in 1:56.37 still both stellar times in their own right. Titmus’ time also dips under the World Championships QT.

For McKeon, the versatile multiple Olympic medalist staked her claim on this event early, clinching the top seed easily in a solid 1:56.76. That morning effort was already within range of her season-fastest of 1:56.00, the time that gave McKeon the silver behind Titmus’ newly-minted NR of 1:54.30 from Aussie Nationals this past April.

McKeon’s personal best previous to tonight’s swim was the 1:54.83 thrown down at Olympic Trials now more than 4 years ago. In Rio, she clinched bronze in 1:54.92.

With her outing tonight, McKeon frog hops American Katie Ledecky and Swede Sarah Sjostrom to sit behind Titmus as the 2nd fastest swimmer in the world this season.

On the all-time list worldwide, McKeon rockets herself up from 10th to 7th, now sitting ahead of the late Camille Muffat of France, Femke Heemskerk of Netherlands and Missy Franklin of the U.S.

It will be broken at last..

its time that WR goes down ….once and for all

So most of these ladies are improving with PBs from everyone in the final besides Titmus and Sheridan.

Not all. Neale swam a 1.57.06 lead-off in Rio heats (the one high note of her intl career) …… before swimming nearly a second slower in the final.

They should take top 6 for relay . Pbs Mckeon Jack Throssell Wilson & leah just off . The sum of those top 4 times theoretically smashes the WR.

Think they’ll take top 5. Titmus, McKeon & Throssell are already on the team with individual swims; Jack is near certain to be top 4 in 100fr (and maybe in the mix for 2nd 50fr spot) so will be selected. Would go Wilson who may well be in mix for relay alternate (5th or 6th) for the 4X100 but Neale has a VERY equivocal international record on this relay. Melverton (already on the team) may not be any worse for a heat option.

I’d take top 6. You want to rest McKeon and Titmus from the heats given their program, and with Melverton swimming the 400 and 1500, and one assumes the 800, she doesn’t need another heat swim. Jack/Throssell/Wilson race the heats for 2 finals spots.

Normally I’d agree with you but I don’t trust Neale; I do advise you to look at her relay efforts at 2015 & 2017 Worlds as well as Rio and then ask the question “is she really someone you can rely on ?”. I DO give some credence to your point re Melverton but I may hold off on that until we see who qualifies in the 800. Titmus looks a pretty sure bet for one spot but I can see another close tussle between Melverton and Gough for the other. If she does have the triple then your argument for non-inclusion is definitely in play; Two events ….. I could probably go with her IF she’s up for being… Read more »

Great swim by McKeon. It seemed she was prioritizing the 100FS and 100BF and that her best days in the 200FS were over. Wrong. Australia will have a very decent 4X200 team. At the Pan Pacs they surprised the USA due largely to a surprisingly slow leg from Allison Schmitt. This time around if all the American girls are firing Australia will still pose a strong challenge. I can’t see any other realistic gold medal contenders.

Fantastic for McKeon, been a bit quiet and overshadowed lately, great to see her roar back. Must be hard seeing your records and titles fall…Australia will be getting some relay silverware based on tonight’s times, incredible depth.

Silverware in this context means a medal of any colour rather than silver specifically. USA will have to be at their very best and both teams could break the WR.