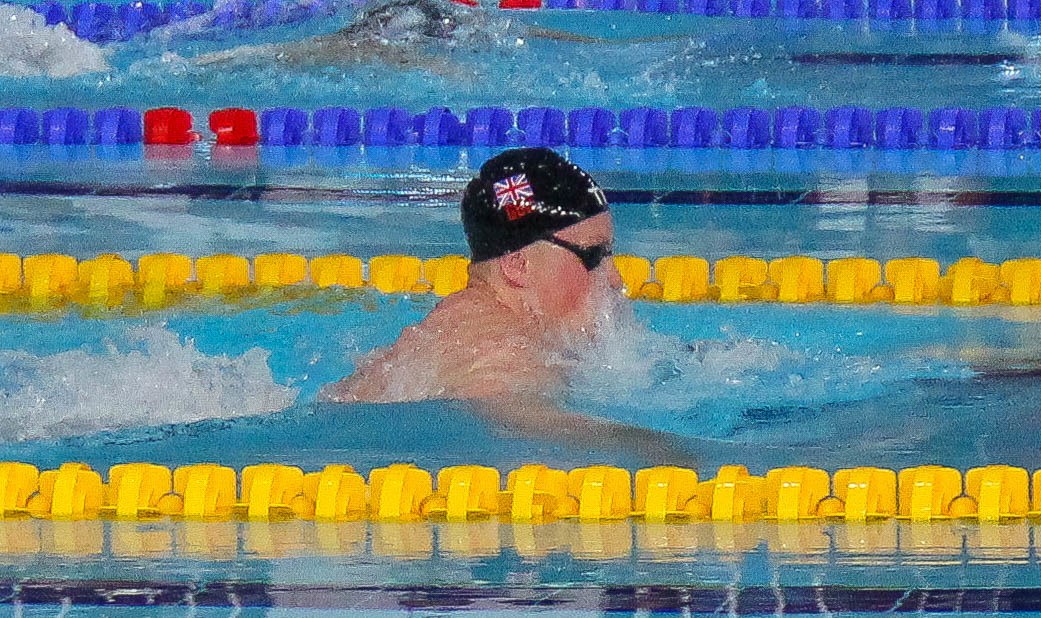 Through just day 1 prelims of the Canet stop of the 2019 Mare Nostrum tour, already 2 meet records bit the dust, both on the men’s side. The crowd needed some excitement, as the weather in this outdoor meet is reportedly rainy, cold and anything but ideal.

First in the 50m back, American Michael Andrew blasted a top seeded effort of 24.79 to represent the only sub-25 second time of the morning, also clearing the previous Canet stop record of 24.87 clocked by France’s Camille Lacourt back in 2016.

Andrew, who is slated to swim this race at the World Championships, sits #2 in the world with a season-best of 24.45 from Monaco, a new Mare Nostrum Tour Record.

The next meet record to be wiped off the books came courtesy of Mr. Automatic himself, Adam Peaty of Great Britain. Doing his usual thing in the men’s 100m breaststroke, the man crushed a menacing 58.92 to lane lane 4 and set a new Mare Nostrum Canet mark.

Peaty has already been as fast as 57.87 this year, which represents the mark he threw down at the British Championships to qualify for next month’s World Championships. It’s scary that he’s 58.92, under training, with the biggest meet of the year still several weeks away.

But behind Peaty was his British partner in crime James Wilby, who put up a super quick prelims time of his own. The Loughborough star also qualified in this event for World Championships and here already nailed a 2nd seeded time of 59.04 to flank Peaty tonight.

He’ll be joined by Japanese National Record holder Yasuhiro Koseki, who represented the other sub-minute breaststroker of the morning in 59.82. Koseki holds the overall Mare Nostrum Tour Record with the 58.78 he threw down in 2018.

Andrew was back in the pool later in the session to take the 4th seed in the men’s 50m free in 22.40, with British beast Ben Proud rocking 22.25 to take the pole position for tonight’s final.

Bruno Fratus, the Brazilian who turned heads with his 21.31 outing from Monaco, is in the mix with a 2nd seeded 22.34.

The Walsh sisters of the U.S. were in the pool with Gretchen Walsh earning the 6th seed in the 50m free in 25.57, tied with young Erin Gallagher of South Africa.

Gallagher made the semi-finals of this event at last year’s Commonwealth Games and holds the South African National Record at 25.03. Coincidentally, that’s also Walsh’s PB from 2018 U.S. Nationals, so there’s a separate min-dual happening between these 2 emerging talents tonight.

However, at the top of the women’s 50m free was Mariia Kameneva of Russia, holding the fastest spot in 25.05.

Sister Alex Walsh is the leader of the women’s 200 back, producing a morning swim of 2:10.03, her 2nd fastest time ever. That leads fellow American Phoebe Bacon, who is less than a second back in 2:10.59.

Emerging Brit Tom Dean claimed the 7th seed in 1:49.17, while 2 Russians tied for 8th in 1:49,24 in Mikhail Vekovishchev and Aleksandr Krasnykh, necessitating a swim-off.

Correction: Michael Andrew went 24.45 in the 50 back last week in Monaco

Got it in there now.

“Katinka Hosszu was in the water this morning”

Is there no live stream for this