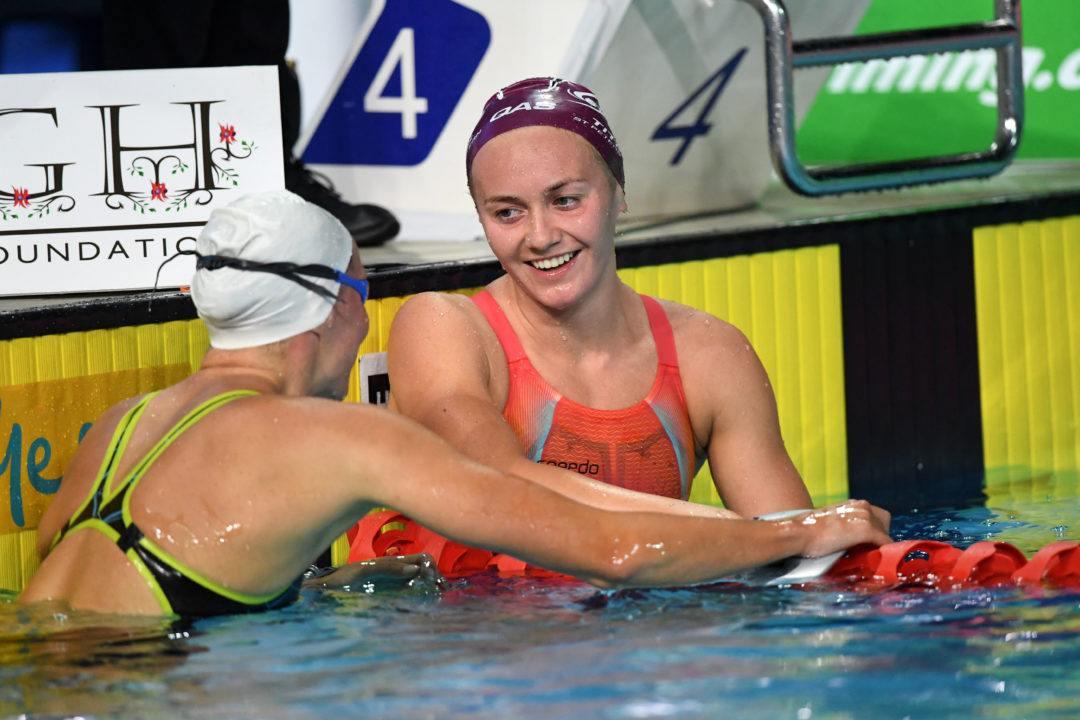 With 1 of 2 big ISL announcements coming our way, Aussie media is reporting that Ariarne Titmus is joining the Cali Condors. Archive photo via Swimming Australia, Ltd.

As we reported, the International Swimming League (ISL) will finally reveal the rosters for two of the four American franchises in a press conference today, Tuesday, June 11th at noon Eastern Time.

The members of European rosters have been steadily been unveiled through social media over the past several weeks, whereby we almost know the entirety of those squads.

It is the American franchises that are surrounded by the most mystery, with only a few hints dropped here and there. For instance, Michael Andrew‘s family owns the New York Breakers, so it’s likely he’ll be competing there, while German media at one point linked Marco Koch to that team as well.

However, Australian media outlet The Daily Telegraph ($), has reported about an hour ago that freestyle ace Ariarne Titmus will be joining the Cali Condors, the San Francisco, CA-based team led by General Manager Jason Lezak.

Titmus has been tearing up the pool in the middle distance freestyle events over the past year, including taking double gold in the 400m and 800m freestyle events at the 2018 Commonwealth Games. The 18-year-old St. Peters Western star followed that up 400m and 800m silver medals behind American Katie Ledecky at the Pan Pacific Championships in Tokyo, scoring Australian and Oceanic Records in each.

Ledecky has already signed on as an ambassador for the ISL, but we simply don’t know which team yet to know if Titmus and her American rival will be friends or foes as the inaugural season unfolds.

Imagine if she and Ledecky both end up in the Cali team. Ledecky has a lot of options though with the DC Trident close to home and the LA team also in California

Isn’t Emily with Standard Energy? Shayna would be handy with her 50 100 & now 200 . AT stepping to KLs front yard , that’s confidence . No one saw that coming .

Possibly the St. Peters Western crew may be joining the same ISL team for the most part, most of them are unsigned

I think this is a great idea. Prior to RIO Olympics, the Australians had some fast times, but come RIO, the Americans blew us out of the water. I have always thought they are the better racers, one of the reasons is because they seem to do so much more racing then we do.