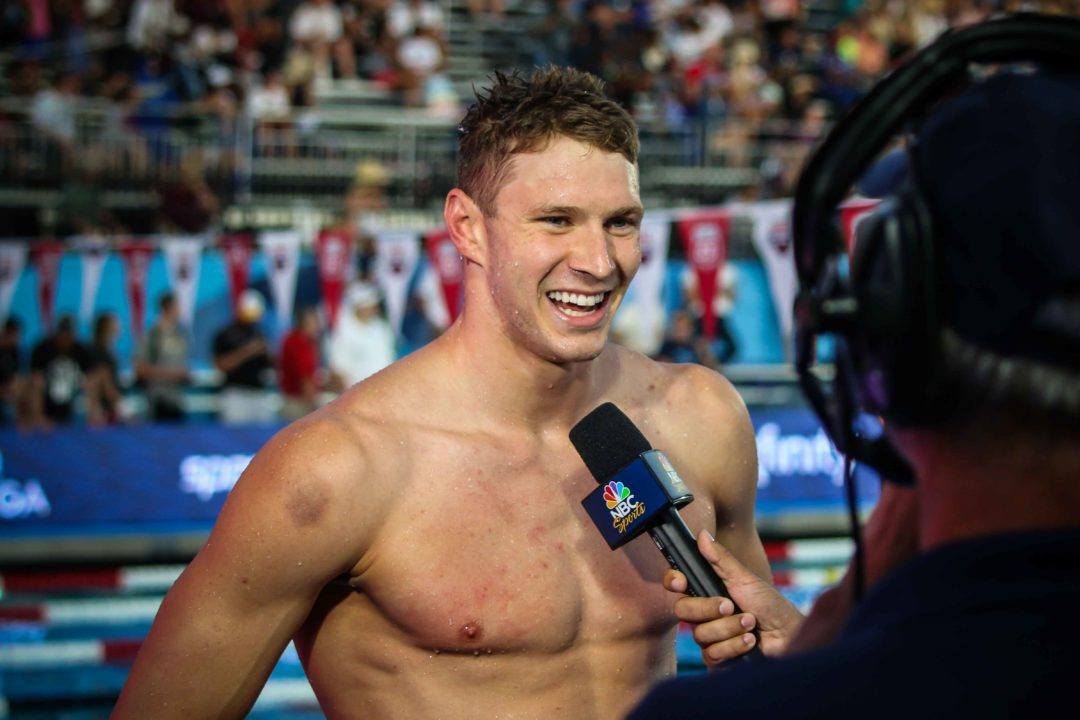 Olympic gold medalist Ryan Murphy came back with a vengeance in 2018 after falling short of his bests in Budapest. Murphy swept the backstroke races at the 2018 Pan Pacific Championships, breaking the Meet Record in both backstroke events to take gold. In the 100 back, his 51.94 was just a tenth shy of his own World Record and tied for the 3rd fastest performance in history. Murphy won the 200 back with a lifetime best 1:53.57, faster than the time he swam to win Olympic gold in Rio.

He continued his success through the short course season as he competed at the 2018 Short Course World Championships. Murphy came away with 3 golds and 6 total medals. Individually, he won gold in the 100 back. He took silver in both the 50 back and 200 back, setting a 50 back American Record in the process. Murphy helped the USA to gold in the men’s 400 medley relay and mixed 200 medley relay. He was also a part of the 2nd place men’s 200 medley relay squad that set an American Record.

Idk I think although Dressel’s summer was weak except for his 100 fly, his NCAA performance more than makes up for it. Just my opinion, but I think 17.63 is the greatest swim of all time, and one of the greatest athletic performances ever. It’s gotta be close to peak human.

personally, LCM matters a whole lot more than NCAA. I feel his performance in LCM just wasn’t good enough to win this award.

Few people outside of the US care about the 17.63. That’s simply the truth.

This is a good example of the “No True Scotsman” logical fallacy. Arguing that “the rest of the world doesn’t care about SCY” does automatically mean that his performances at the NCAA championships were not astonishing. The roll call of famous sprinters who have competed in NCAAs is fairly comprehensive and Dressel easily beat them all, that’s impressive regardless of the format of the meet. Personally, if you swim a 17.6 in the 50y free, I think you win swimmer of the year. That’s just my opinion, I understand the argument for Murphy.

I mean, he won the 50 free by a bigger margin than Murphy was from being the 1st 200 backstroker of the year.

Congrats to the world’s third-best backstroker. He’s got some work to do if he wants to beat Xu and Kolesnikov.

… He has beaten Xu and Kolesnikov

Yes… Rylov wasn’t mentioned even though he was the only person to beat Murphy this year.

Yes, Rylov raced with Murphy three times in the last two years and he won three times… He also leads the world ranking in 200 back for two seasons already.

After seeing his times in 50 back and 200 back at scm and his improvements in freestyle events, Rylov could drop big time in 100 back.
Speed + endurance , Rylov will be the biggest challege for Murphy in Tokyo.
And fair to say, Kolesnikov has the most potential to be a major contender in back events at Tokyo.

A tough call for me. Murphy, Andrew, Dressel, Kalisz all with bright spots this year and no one who really stuck out. But I agree with Murphy – his LCM times were the best of the group.

I think unfortunately for Kalisz he needs to either have a stud season or get on a relay to win an award like this. If I were him I’d be testing the 2free a lot I really think he could throw down