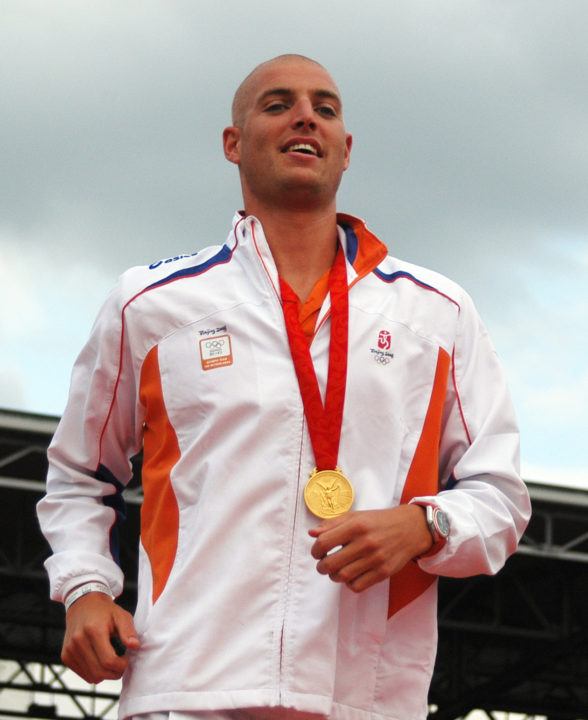 Van der Weijden's story has all of the makings of a perfect Heart of a Champion candidate: overcoming a huge challenge to become the best in the world, an incredible feat of endurance, and finally an enormous financial impact upon cancer research.

The achievements of Dutch open water swimmer Maarten van der Weijden carries all of the elements of a perfect Heart of a Champion story. It has the major competitive swimming achievement: in 2008, he won Olympic gold in the open water 10km (the first man ever to do so, as it was a new race that year) after surviving leukemia. It has incredible feats of endurance: in March of 2018, he broke the World Record for longest distance swum in a 25m pool in 24 hours, when he swam 102.8km in a day. That’s an average pace-per-100 of 1:24, held for an entire day.

And, the most important element for the Heart of the Champion Award: it included an incredible impact on his community.

After his 24-hour swim, van der Weijden rose to a new challenge: he wanted to swim the entire track of the Elfstendentocht in his native Netherlands, the track of a famous 200km long ice skating race in the northern part of the country. He raised money for charity by allowing the public to sponsor segments of his swim where they would be able to swim alongside him. Shortly before the race, medical experts determined that the concentration of E. coli in the water was too high to be safe for his sponsors, but he chose to push on through the 3-day adventure, taking only short naps and 3-hour breaks to keep pushing through. About 75% of the way through the swim, he could no longer stave off waterborne illness and had to stop after 163km swum in 55 hours time.

The event was televised nationally in the Netherlands, and raised over 5 million Euros (5.72 million USD), making it the highest-dollar philanthropic charity swim in history that we could find.t