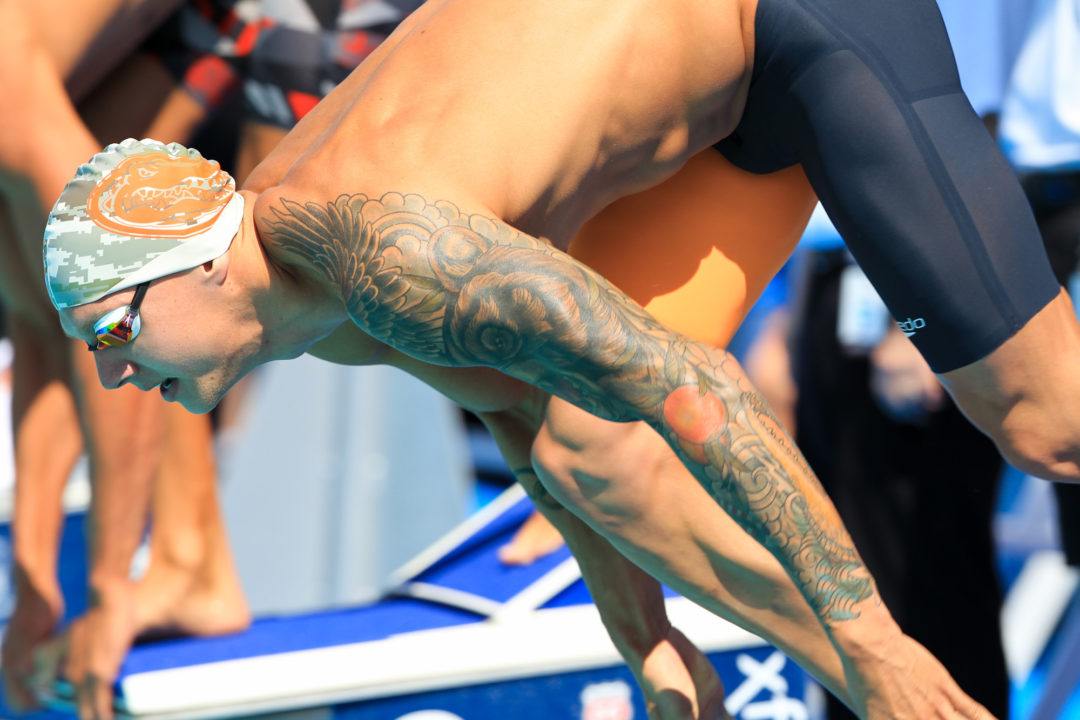 Coming before the individual events of all legs but the 100 breast, the mixed medley relay will set each federation up for some tricky 'blind' lineup decisions as the U.S. chases its own world record and Australia closes in on the Americans. Archive photo via Tim Binning/TheSwimPictures.com

To make things clear up front, the mixed medley relay is one of the tougher events to predict at this year’s Pan Pacs for a few reasons. First, it’s the first time the event has ever been conducted at Pan Pacs, and it’s hard to say just how seriously each team will take it. The mixed relays have been kind of an afterthought for most of their existence in competitive swimming, but with the mixed medley being added to the 2020 Olympics (also taking place in Tokyo), it’s likely that the priority level has risen significantly. Second, it takes place on the very first day of Pan Pacs, so position battles aren’t going to be decided by individual event swims the way they will in the single-gender medleys. The only events that will have gone off by the time the mixed medley happens are the 100 breaststrokes, so teams expecting big drops from their stars (say… Caeleb Dressel) won’t have the opportunity to make a decision based on event finish orders.

That puts Team USA in a tricky spot. Coming off the 2017 season he had (becoming the only man besides Michael Phelps to win 7 World Champs golds in one meet), he has to be on this relay… but it’s hard to justify putting him on the free leg after he took 6th at U.S. Nationals. That probably means USA Swimming will have to do what it did in 2017 and use Dressel on the fly leg. Lilly King is a more dominant breaststroker than anyone Team USA has on the men’s side, so she probably fills that role. Mixed relay strategy dictates that getting out front into clean water is most important, so we’ll project Ryan Murphy to lead off in lieu of world record-breaker Kathleen Baker. That would build Team USA a lead so King and Dressel don’t have to swim through choppy water, and Simone Manuel is a trustworthy relay anchor. As a bonus, it saves USA Swimming from making the tough decision of which man would anchor the relay: National champ Blake Pieroni? The fastest American this season Zach Apple? Veteran presence and Worlds silver medalist Nathan Adrian?

With all that uncertainty, re-breaking the world record is a stretch, unless Team USA makes all the right roster decisions and has all four legs on point. Grevers split from last year (52.3) is beatable, but King (1:04.1) and Dressel (49.9) were swimming at historic speeds, with Manuel (52.1) about as fast as she’s ever been.

Australia has a surprisingly good relay here. Their strengths really fit with what has become the established strategy for mixed relays: stacking men on the first two legs to get clean water for the two women’s legs. Jake Packard is the slightly better choice among two shaky breaststroke options. Emma McKeon is a great butterflyer and better than what the Aussies have on the men’s side. The choices then move to the bookends. Mitch Larkin and Emily Seebohm are pretty comparable on the backstroke leg, relatively speaking – neither will beat the world record-holders leading off other relays, but should at least keep things close with the best in their genders. The free leg is a tough call. Cate Campbell is potentially the best in the world at what she does. Kyle Chalmers is the Olympic champ and young enough to continue dropping time. Chalmers might be trending upwards to the 200, though, and Campbell has a history of eye-popping relay splits (51.00 at Commonwealths, anyone?), while Chalmers was actually slower anchoring the men’s medley at Commonwealths (48.25) than he was individually (48.15). So we’ll take Larkin-Packard-McKeon-Campbell, which projects only about seven tenths slower than the Americans without even factoring in how much faster Campbell is off a relay start than she has been individually this season. Depending, of course, on just how unrested King & Dressel & co. were at U.S. Nationals, Australia could make this relay a lot closer than expected.

Japan has a lot of options, most of them stemming from versatile sprinter Rikako Ikee. Ikee is the best woman in Japan at the 100 fly and 100 free, and could take either leg at Pan Pacs. With Katsumi Nakamura sitting #2 in the world in the 100 free, though, it’s worth throwing him on the anchor leg with Ikee swimming fly. Ryosuke Irie is easily the best 100 back threat. That makes the breaststroke decision easier – Japan has world-beaters in both the men’s and women’s 100 breaststrokes, but with Irie leading off, it makes sense to use Reona Aoki (or another one of Japan’s great women’s breaststrokers) on that leg.

Without Penny Oleksiak, Canada loses a key leg from last summer’s bronze-medal relay. Kylie Masse still makes the most sense as a leadoff, and look for her to challenge the 58-barrier, especially in a field where the male backstrokers could pull her along in their wakes, much the same way Regan Smith did last summer at World Juniors when. (Mixed relay leadoffs don’t count for world records for that very reason, but it wouldn’t be a shock to see Masse put up the first 57-second swim ever while leading off this event in Tokyo). Canada needs Richard Funk to get back to his 59.1 split level from last season – he’s only been 1:00.9 so far this year individually. The Canadian team is buoyed by its women, so they’ll need Funk and their other male leg at the top of their games to keep them in the medal hunt. Canada doesn’t really have a great male option on fly, so it’s left with a tough choice: going with a non-descript male fly leg or using Yuri Kisil on free and leaving Taylor Ruck off the relay. Ruck could have a very busy Pan Pacs with 6 individual entries and likely spots on all three women’s relays, so let’s use this event to give her a break, using Kisil on free and Rebecca Smith as the fly leg. That leaves Canada about three seconds back of Japan for bronze here in aggregate times, but this relay is probably a longshot for a Canadian medal anyway, at least without Oleksiak involved.

Why would an event at the Olympics not be competed everywhere?