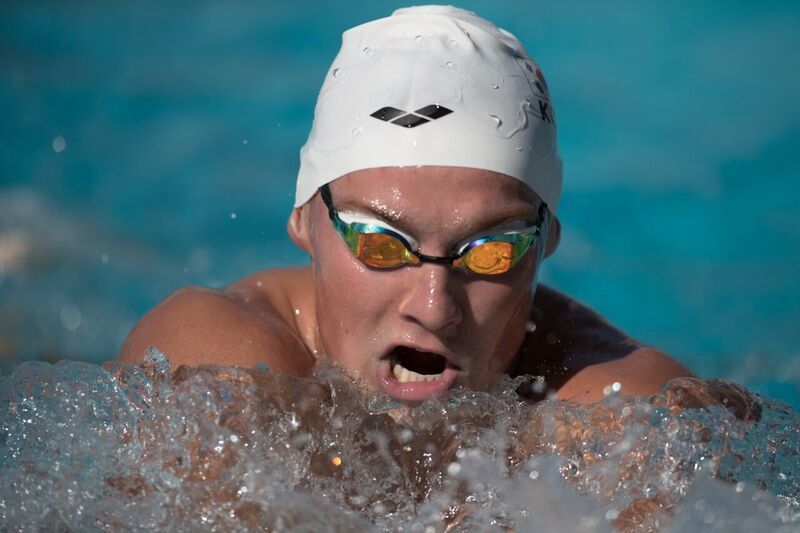 After repeating as champions last season, the Stanford Cardinal is in the hunt for a threepeat, but the Cal Bears won't make it easy.  Archive photo via “Rafael/Domeyko Photography”

The 2018 Men’s Pac-12 Championships are set to kick off tomorrow in Federal Way, Washington. After repeating as champions last season, the Stanford Cardinal is in the hunt for a threepeat, but the Cal Bears won’t make it easy. Stanford has a ridiculously talented distance group that should bring in huge points, but the Bears are strong on the opposite end with a solid group of top-notch sprinters.

Though no swimming events have been contested yet, the teams already have some points on the board as the diving events took place last week. Heading into the meet, USC has a slight lead over Stanford and Cal. You can read more about the diving events and see the current team standings here.

50/100 free- The sprint freestyles feature several stars, including Cal freshman Ryan Hoffer. Swimming fans have been waiting to see Hoffer perform with some rest and if he can match the blistering times he’s swum in the past. Teammates Justin Lynch, Pawel Sendyk, and Michael Jensen will be there to challenge. Arizona State’s Cameron Craig is back after winning the 100 free as a freshman. Stanford’s Sam Perry, a Pac-12 sprint champion, looks to return to the top of the podium. USC’s Olympic sprinters Santo Condorelli and Dylan Carter should be in the mix as well.

200/400 IM- Cal’s Andrew Seliskar is the reigning champion in both the 200 and 400 IM. He’s won the events in each of the last 2 seasons, but Stanford’s Abrahm DeVine is a threat. DeVine had a big summer, qualifying for Worlds in the 200 IM, and could be due for a big breakout in the yards pool as well. He’s already dropped from his best time this season in the 200 IM. Another man to look out for is Arizona’s Nick Thorne, who was an Olympic Trials semifinalist in the 200 IM. Arizona State’s Cameron Craig and Cal’s Matt Josa are also in the hunt.

200 free- Arizona State’s Cameron Craig will defend his title after winning the event as a freshman, but USC’s Dylan Carter will look to avenge last season’s narrow loss. Stanford’s Grant Shoults returns after taking bronze in 2017. Arizona State may see a new face on the podium with freshman Grant House competing in his first conference meet. Cal’s Michael Jensen, a returning finalist, may also turn some heads.