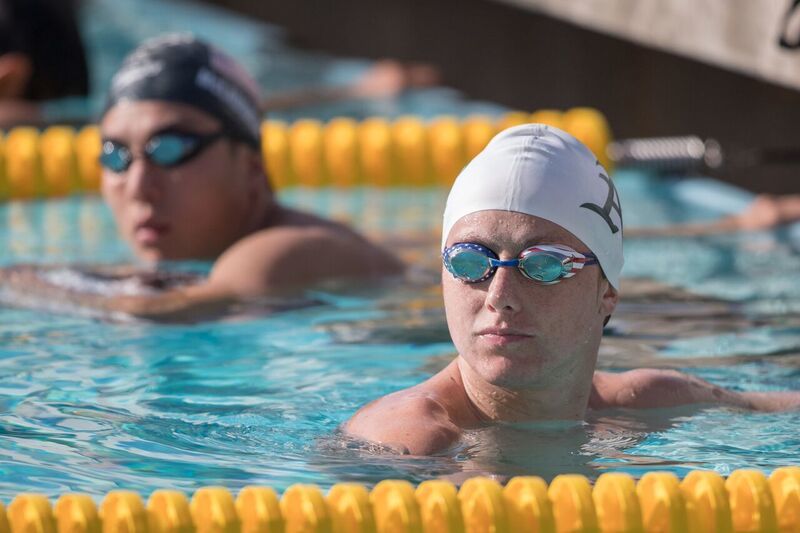 The Cal men’s swimming & diving team have won 191 Pac-12 event titles in program history, dating back to the launch of the conference in 1961 (where USC was an overwhelmingly-dominant team in the Pac-12). Those Pac-12 event titles have turned into 4 team titles (the team has been around since 1914), and 5 NCAA team championships.

And yet, there was still new ground to be broken headed into the final session of Saturday’s 2018 Pac-12 Championship meet, where Cal entered the day with a nearly-insurmountable 133-point margin over the two-time defending champion Stanford men.

When Nick Norman touched 1st in the 1650 free, swimming a 14:39.77 that improved his lifetime best by over 10 seconds and his season-best by nearly 16, he became Cal’s first-ever Pac-12 men’s event champion. That time jumps him to 5th in the nation this season and gives him an NCAA automatic qualifying time. It leaves him just shy of Jeremy Bagshaw’s 2014 Cal school record of 14:39.00.

Norman is a two-time NCAA Championship qualifier, but has yet to swim a season-best time at that meet, which in both cases in this 1650 would have scored him points.

When the Pac-12 (then known as the Athletic Association of Western Universities, or “Big Five,” after the dissolution of the Pacific Coast Conference) first added a men’s swimming & diving championship in 1961, this race was actually a 1500 meter free (though other events were raced in yards). For a three-year period from 1976-1978, there was no unified conference title, and instead a North and a South champion (hence, why there’s more champions listed below than seasons). Through all of those twists, no Cal swimmer ever came out on top of the 1650 free.

14 of the 59 titles belong to programs that no longer sponsor men’s swimming.

Could you imagine if you UCLA still had a men’s swim team? They would most definitely be competing with cal and Texas right now.

I am guessing that would depend on the coach. Lots of other great trans from the 70’s and 80’s aren’t elite now.

I think just about everyone would welcome another men’s team in the Pac12, but what makes you think they’d be title contenders simply by virtue of existing?