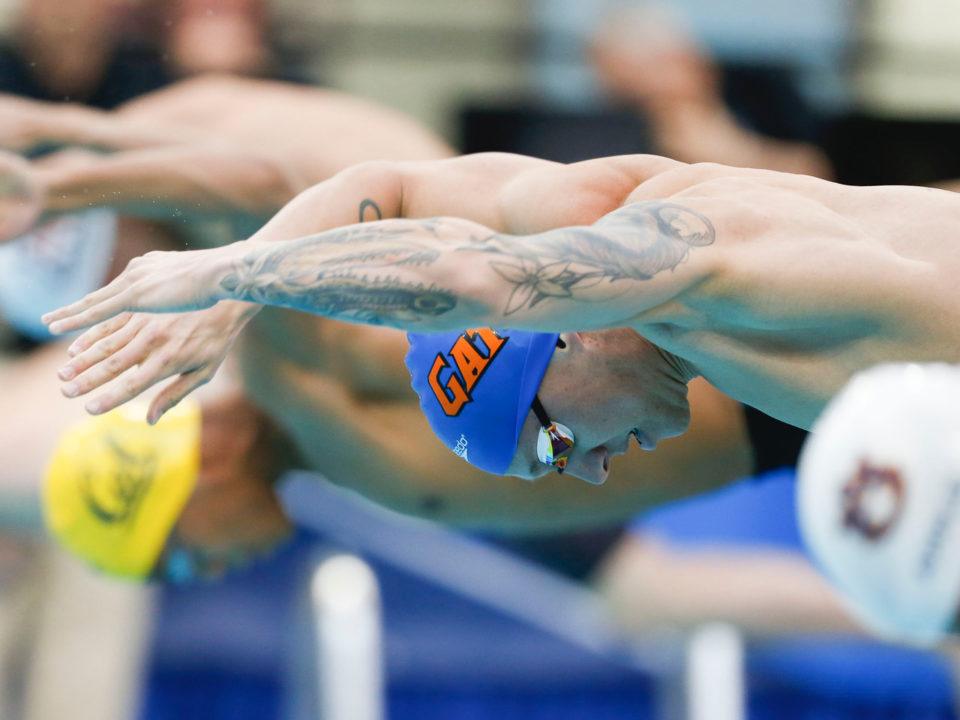 Tonight, Caeleb Dressel will be looking to break the magical 18.0 barrier in the 50 free. Current photo via Tim Binning/TheSwimPictures.com

The first full final session of the 2018 Men’s NCAA Division I Swimming & Diving Championships looks it’ll bring swims fan plenty of excitement after this morning brought the usual mix of successes and disappointments.  One of the big successes stories was Caeleb Dressel, who lowered his own record in the 50 free, brining that mark down to 18.11 and has swim fans salivating over the possibility of seeing a 17.9 or faster 50 free tonight.  The Indiana Hoosiers also had a strong morning — they swam lights-out this morning and look like they’ve peaked for NCAAs in a way they haven’t in a very long time.  Meanwhile, the Texas men have to be rather disappointed.  After a great swim by freshman Sam Pomajevich in literally the first individual swim of the meet to make the A-final, the Longhorns missed the A-final of the 200 IM and 50 free completely, then also failed to get their medley relay into the A-final, despite being the three-time defending champions in that event.

Indiana’s success and Texas’s disappointment this morning suddenly makes the team race look like it could be a lot more open than we initially thought.  Cal, NC State, and Florida all swam pretty much as expected this morning, meaning they are very much in the thick of things.  Texas is going to get a boost from diving, but if the other teams come out swinging tonight, this could continue to look like a five-team race for now.  Here’s a quick event-by-event look at tonight’s races:

It looked like this morning’s prelims sessions was a little more tactical than last year’s, meaning that the top swimmers could have some more in the tank.  Texas’s Townley Haas won this event as a freshman, and came in 2nd behind teammate Clark Smith last year, but will have to hold off a very strong field that includes top-seeded Felix Auboeck of Michigan, who was the only man to break 4:11 this morning, NC State’s Anton Ipsen, and a pair of Stanford swimmers in Liam Egan and Grant Shoults.

Andrew Seliskar‘s 1:40.40 this morning was actually faster than the winning time from last year, although that’s no guarantee of victory for the Cal junior.  This field also features defending co-champion Mark Szaranek of the Florida Gators, Stanford’s Abrahm DeVine, who represented the USA in this event at Worlds last summer, and NC State’s Andreas Vazaios, who looked pretty relaxed this morning, among others.  Look for Indiana to pick up big points here with Vini Lanza and Ian Finnerty both make the A-final for the first time in their careers.

The B-final here is going to be pretty exciting too.  Texas really needs Jonathan Roberts to hold to win to hold to those 9th-place points, while Cal has three men swimming, and Auburn’s Hugo Gonzalez will be looking for redemption after swimming over two seconds slower than his time from SECs and missing the championship final.

All eyes are going to be lane 4 as we watch to see if Dressel can become the first man to break 18 seconds on a flat start.  There will be a great battle behind him, with NC State’s Ryan Held holding the 2nd seed after swimming 18.69 in prelims.  We’ll also be watching Cal freshman Ryan Hoffer tonight.  He snuck into the A-final with a 19.04, but he was a 18.71 while still in high school, so if he can get to that time, he’ll could battle for a top-three finish as well.

Some of the key Indiana swimmers had struggled to match their times from Big Tens at NCAAs the past few years, but it looks like they’ve figured it out this year, and this morning Hoosiers were just half a second off their top seeded time.  They were about a second ahead of NC State and California, but with the possibility of some relay lineup swaps, this could still very much be a three-way battle until the very last stroke.  Meanwhile, Texas really needs to win the B-final after its big miss this morning.  Finally, we’re not entirely sure where Dressel is going to end up on this relay, but whether he swims breast, fly, or free, we could see the fastest split ever in any of those respective strokes tonight.

What a privilege it is to watch Caleb Dressel. He swims great, carries himself well, speaks with humility and is obviously a team player.

DeVine wins it tonight. I would love to see 1:39 for multiple swimmers.

Wish I could watch it, in the U.K. the women’s was available for free on the live stream through the college site, then on ESPN player on Friday and Saturday, can’t get that BTNGO to work on anything so only get to watch tomorrow and Saturdays finals on ESPN player.