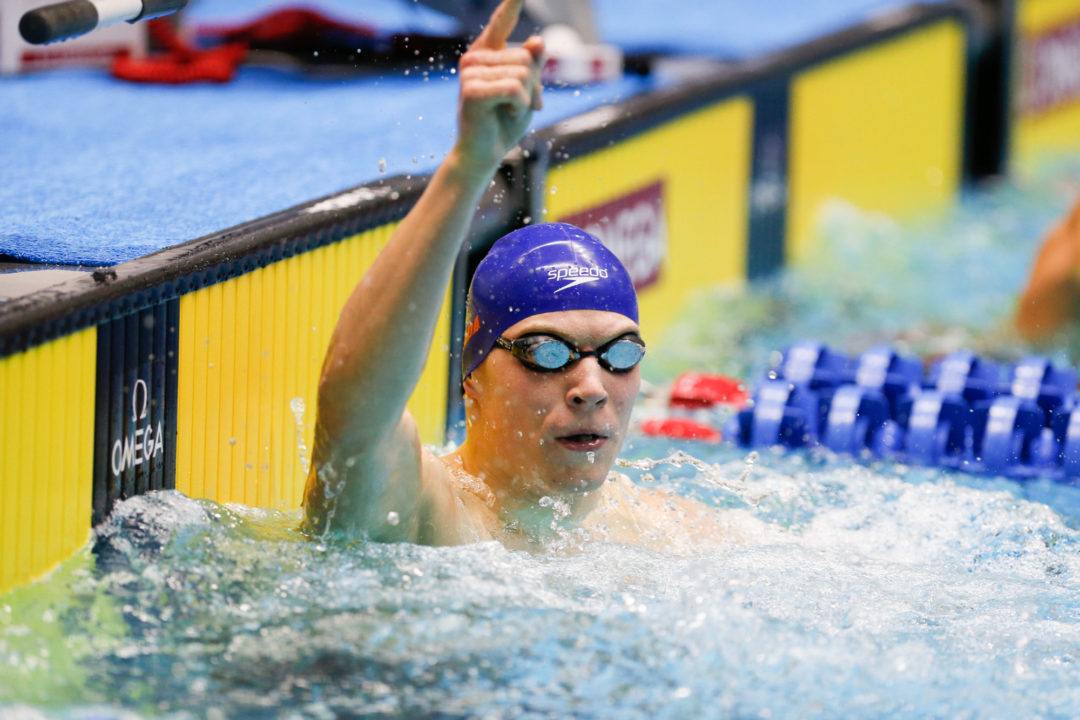 While NC State and Texas are 2 of the top teams battling for the title tonight, the Florida Gators are bringing in a team that could be hard to beat. Archive photo via Tim Binning/TheSwimPictures.com

We’re getting ready for the first event at the Men’s NCAA Championships, as the meet gets started with the 800 free relay tonight. Last season, NC State blew away the NCAA Record, while Texas was 2 seconds back to take down the American Record. The Wolfpack returns 3 members of its champion relay: Ryan Held, Justin Ress, and Andreas Vazaios. The loss of Soeren Dahl, who split a 1:30.67 last season, could be hard to make up for, but the NC State men are still very much in the title conversation. At ACCs, the Wolfpack sent in distance ace Anton Ipsen to take over the spot.

Texas returns 2 out of 4 members from last season’s American Record-setting relay: Jeff Newkirk and Townley Haas. This season, Newkirk has already put up a best time, breaking 1:33 at Big 12s. Haas is a major player as he’s the fastest man ever in the 200 yard free. At Big 12s, they also fielded Austin Katz and Jonathan Roberts. As a freshman, Katz has had some great swims this season. Roberts’ best is 1:34.54 from 2015, but he’s made big improvements in his other events since then, so he could drop a lot of time from that. The Longhorns have some other options, however, as they could opt to put in Joseph Schooling. Though he’s needed in the sprint relays, there’s potential that he may only swim 2 individual races and do all 5 relays. We also haven’t seen what Ryan Harty can do yet.

While NC State and Texas are 2 of the top teams battling for the title tonight, the Florida Gators are bringing in a team that could be hard to beat. They have at least 3 men capable of splitting 1:31 between Khader Baqlah, Maxime Rooney, and Mark Szaranek. Jan Switkowski may be able to get down in that range too. He’s been 1:32-low from a flat start and has been having a great season. In the unlikely event that Caeleb Dressel should swim this relay, the already-dangerous Gators would have to be considered the favorite. It wouldn’t be surprising to see the race come down to a close one between Florida and NC State. The Wolfpack’s Ress and Vazaios could bring their splits into the 1:31-range, but they may need Ipsen to be in the 1:32-range at least in order to hold off Florida.

Indiana is a big threat with Blake Pieroni already closing in on his best time this season and Mohamed Samy swimming much faster than he did last season. Vini Lanza will be a key piece here, and though Ian Finnerty is better known for his breaststroke talents, he’s also put up a 1:33-low on this relay at Big Tens. Michigan is another top-8 contender, with Felix Auboeck showing great speed with a 1:31-mid split at Big Tens.

Cal has a good lineup this season. They have 2 returning relay members in Michael Jensen and Andrew Seliskar. At Pac-12s, Seliskar put up a lifetime best 1:32.12 on the leadoff. Zheng Quah split a 1:32.2, which is promising, but they need to have another swimmer split under 1:33 to be up with the top teams. Conference rivals USC , ASU, and Stanford are also in the hunt for a top-8 finish. The Trojans bring back Dylan Carter, Patrick Mulcare, and Santo Condorelli, though it’s possible they’ll leave Condorelli off this relay in favor of the sprint relays. Stanford also returns 3 legs with Liam Egan, Grant Shoults, and Abrahm DeVine. Pac-12 200 free champ Cameron Craig and freshman Grant House are the major players for ASU.

There are a few other teams who could make a run at a top 8 finish. Missouri took silver at SECs with Mikel Schreuders (1:33.4) and Sam Coffman (1:32.8) putting up their fastest legs. Ohio State swam to bronze at Big Tens with a 1:32.9 split from freshman Paul DeLakis, but they have room to improve since DeLakis was even faster than that from a flat start later in the meet. Georgia returns Jay Litherland and Gunnar Bentz in this relay, but it’ll be tougher for them to land a spot in the top 8 now that Chase Kalisz and Pace Clark are gone. Auburn has a shot with Zach Apple already breaking 1:33 individually this season. If Hugo Morris and Hugo Gonzalez hit their strides, we could see the Tigers earning All-American status. Tennessee is another SEC squad battling for a spot in the top 8. They got 1:33 splits from Joey Reilman and freshman Josh Walsh last month.

Harvard is the darkhorse pick here. They’re seeded 9th coming into the meet. Dean Farris was on fire at the Ivy League championships and is now the 4th fastest performer ever in the 200 yard free. He split a 1:30.69 on the 800 free relay there for the 5th fastest relay split ever. To land in the top 8, though, they’d likely need Mahlon Reihman and and Zach Snyder to drop at least a second from their splits at Ivies. Brennan Novak was a 1:34-low and it would go a long was if he could drop down into the 1:33-range.

When do the lineups get release?

After the first swimmers dive in.

They used to get released about 30 minutes pre-race, and we’d report them, but a few years back, a women’s team coach that I will not name here decided she didn’t like it, complained, and the NCAA stopped releasing lineups. Technically, teams can change their lineups until the first swimmer is on the blocks.

It was Teri McKeever

Didn’t even consider Florida until this article. Thanks for saving my pick-em haha

Do you swim for Milwaukee?

That’s another kid. Same name, I know. But I’m a tad younger.

I was so wrong.

Even though I didn’t do great, the women’s pick em was much easier to choose at least the winners, especially the relays, in men’s most events are so open (except the Dressel individual ones), must have changed my mind in my pick em about a hundred times and times running out……lol

Did you pick yourself