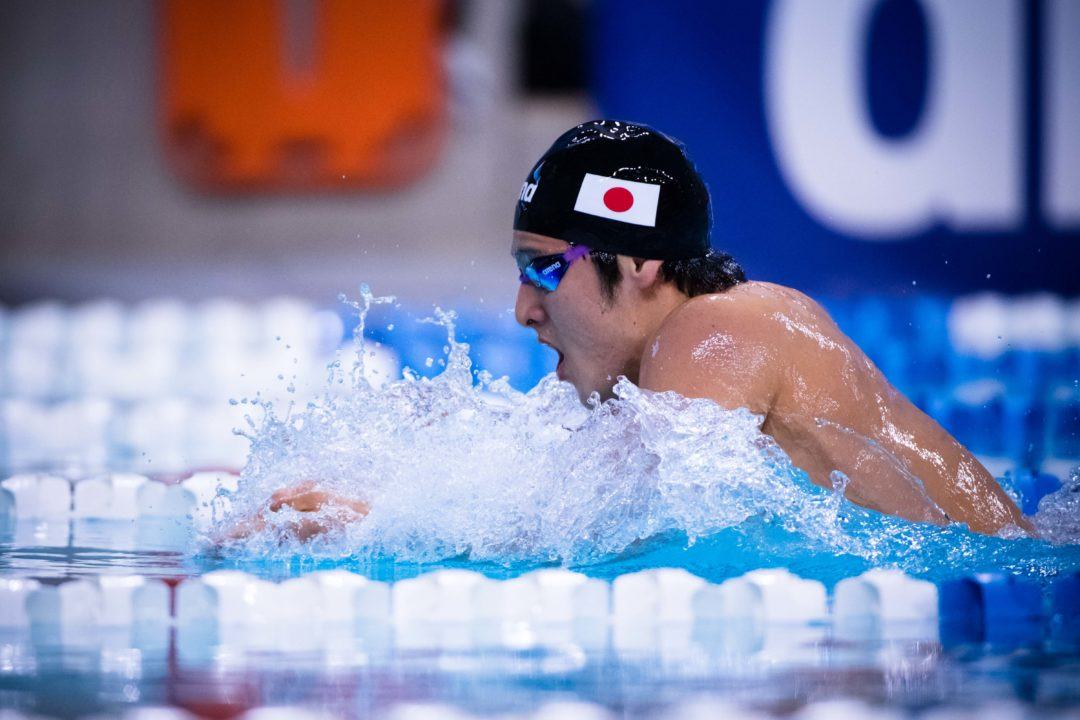 Daiya Seto, who just turned 24 today, nailed a win in the men's 400m IM at the Japan Open, registering a world-leading effort in the process. Archive photo via Mike Lewis/Ola Vista Photography

17-year-old Rikako Ikee blasted a new 50m fly national record  on day 1 of the 2018 Japan Open, while other swimmers also made some noise at the Tatsumi International Swimming Centre, site of the 2018 Pan Pacific Championships.

In addition to Ikee’s new 25.25 national mark in the 50m fly, Syunichi Nakao came within .07 of the national record mark for the men in the same event. Nakao notched a winning time tonight of 23.47, just shy of 23.40 mark nailed by Kento Ida at last month’s Japan Swim. Tonight, Ida settled for silver in 23.53 in the race.

The women’s 400m free saw Chihiro Igarashi touch the wall first in 4:09.74 to represent the only swimmer in the field venturing into sub-4:10 territory. Her time tonight was slightly off her 4:08.89 registered last month. Not too far behind was Waka Kobori, who, at just 17 years of age, clocked a silver medal-garnering effort of 4:10.35 this evening.

A birthday swim was in order for Daiya Seto, as the newly-minted 24-year-old clocked the swiftest time of the men’s 400m IM field. 4:08.98 is what it took Seto to wind up on top tonight, miles ahead of the next closest competitor in Tomoya Takeuchi. Takeuchi touched in 4:14.40, beating out Olympic gold medalist Kosuke Hagino in the final 100m stretch. Hagino punched 4:14.77 for bronze in the race.

For Seto, his time comes within just hundredths of American Chase Kalisz’s world-topping 4:08.92 from the TYR Pro Swim Series Atlanta in March, setting up a primetime battle for 400m IM supremacy at this year’s Pan Pacific Championships. Hagino will need to find his form in this event if he wishes to follow-up his 2016 Rio gold with a win at the Pan Pacs.

Reona Aoki was victorious in the women’s 100m breaststroke, although it was an exceptionally close race among the top 3 finishers. Aoki glided to the wall in 1:06.65, just .01 ahead of runner-up Satomi Suzuki and her time of 1:06.66. Then, just .05 later, Kanako Watanabe registered the time of 1:06.72 to round out the top 3.

This same trio of Japanese women already wreaked havoc on the worldwide rankings at last month’s Japan Swim. Aoki is currently tied with American Lilly King for the fastest time in the world at 1:05.90, while Suzuki and Watanabe fill the 7th and 8th slots among the top 10 fastest performances this season.

For the men’s 100m breast, it was visiting Chinese swimmer Yan Zibei who wound up on top, registering a winning effort of 59.46. He managed to just out-touch Yasuhiro Koseki‘s mark of 59.48. 200m breaststroke world record holder Ippei Watanabe also made his way to the podium in his weaker event, touching in 59.78.

Finally, in the men’s 100m freestyle, former national record holder Shinri Shioura got the job done in 48.93 the only sub-49 second outing of the field. Of note, national champion Katsumi Nakamura was not among the competitors in the race.