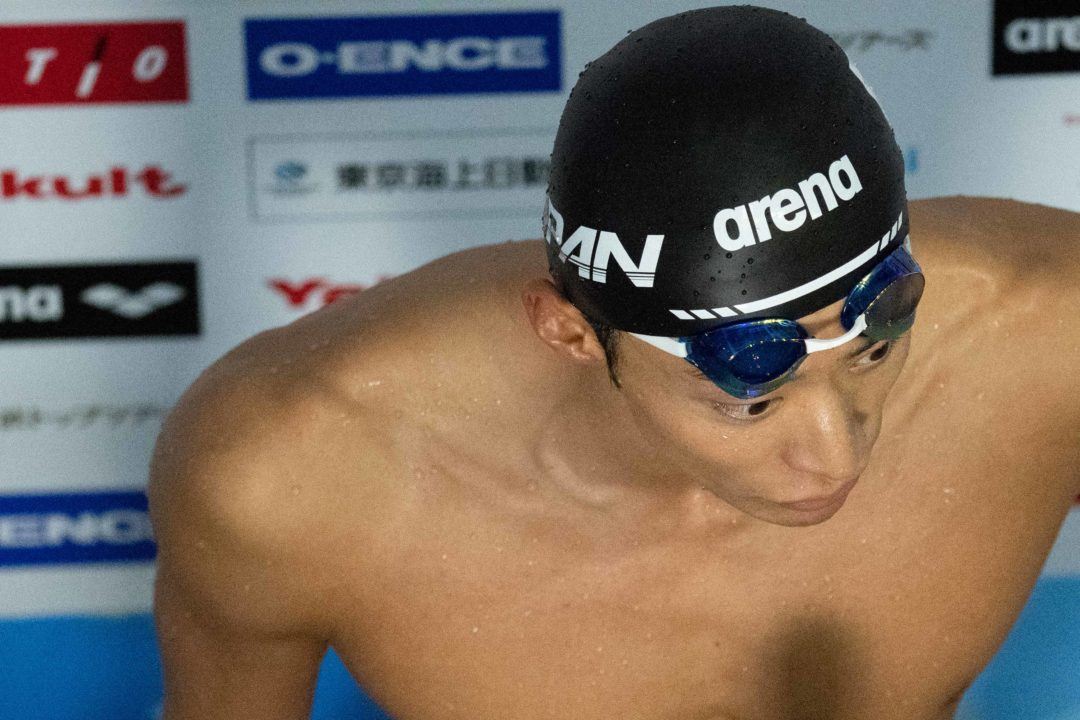 Ryosuke Irie claimed 2 silvers behind American Ryan Murphy at the Pan Pacific Championships. Will the Japanese national record holder be able to come away with a gold ahead of rival Xu Jiayu here in Jakarta? Archive photo via Mike Lewis/Ola Vista Photography

The 23-year-old will be back in the pool tomorrow on day 5, contesting the 50m fly race. He will face his 100m fly foes in China’s Li Zhuhao and Japan’s Yuki Koboro who finished with the respective silver and bronze tonight.

Singapore also has a shot at a medal in the women’s 50m breaststroke sprint, where national record holder Roanne Ho will be racing against the likes of Japan’s Miho Teramura and Satomi Suzuki, as well as Korea’s Hyejin Kim.

Although Katsumi Matsumoto clocked the fastest split (47.65) among the Japanese men’s gold medal-winning 4 x 100m freestyle relay tonight, he will not be contesting the individual 100m sprint tomorrow. Instead, Japan will look  to national record holder Katsumi Nakamura and domestic rival Shinri Shioura to land on the podium in the event that’s also missing its 2014 Asian Games champion, Ning Zetao of China.

Japan’s Ryosuke Irie will get one last shot at beating China’s Xu Jiayu, the winner of the 50m and 100m backstroke races so far here in Jakarta. Irie, the double Pan Pacs silver medalist in Tokyo just a couple of weeks ago, is seeded 1st in the men’s 200m back here, with Xu close behind. Japan’s Keita Sunama and Singapore’s Quah Zheng Wen will also be in the hunt.

Finally, we’ll see another duel between Chinese 16-year-olds Wang Jianjie and Li Bingjie, as each tries to capture the 800m free crown. Li already has the 200m free Asian Games gold around her neck  while Wang snagged the 1500m top prize as well.

Joe wins 50 fly easy.
I feel bad for Irie though, but Murphy and Xu are both gods.

Easy win for Schooling tonight in the 50 Fly. Miles ahead of anyone else