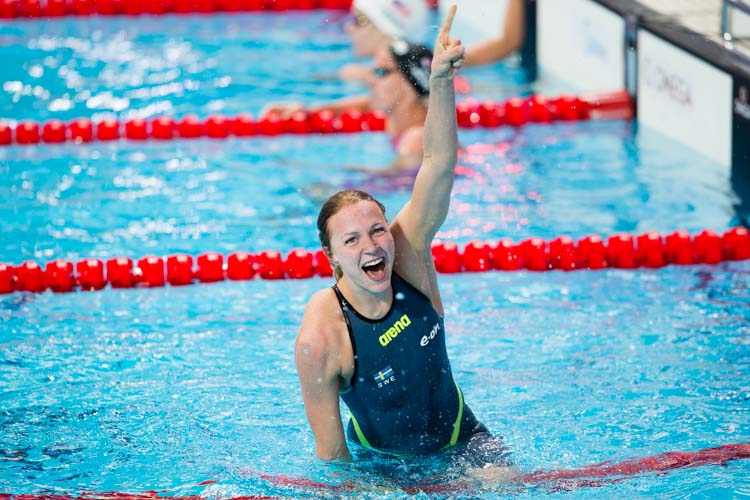 Sjöström has been unstoppable this year, and Budapest will be no different. Archive photo via Tim Binning/TheSwimPictures.com

Nobody this year is swimming as fearlessly in the sprint events as is Sweden’s Sarah Sjöström. The world record holder in the 50 and 100 fly has been leaps and bounds ahead of the rest of the world in these events, and in the 100, she’s already been within a few tenths of her own world record.

Swimming at the Canet stop of the Mare Nostrum tour this June, she was 55.76 to win the 100 fly, a time that ranks first in the world by over a whole second. That time, though it’s in the middle of her season, would’ve won gold in 2016 in Rio by more than seven tenths.

Dana Vollmer, who won’t be swimming this summer in Budapest, is the only other woman to have ever broken 56 seconds in the 100 fly. Her 55.98 was the world record when she won gold in 2012. Since then, though, Sjöström has swum 55’s in season, and a 56 from her is very regular, expected; if not boring. The gold will be hers in Budapest, and by a considerable margin.

Behind the Swede are two Olympic finalists from 2016. Japan’s Rikako Ikee has been the most impressive, besides Sjöström, in this event in 2017. Her 56.89 from the Tokyo Swimming Championships in January ranks 2nd in the world, and is the only other time under 57 seconds. Canada’s Penny Oleksiak, meanwhile, the Rio silver medalist, has been 57.32 this year. Oleksiak swam that in Canet, like Sjöström. Ikee was 5th in Rio, but her time from January is just .03 off of her Rio time, and she has the hot hand over Oleksiak going into Budapest.

South Korea’s An Sehyeon, who was two spots out of the Rio final to finish 10th in the semifinals, rocked a national record 57.28 in Canet. That’s a solid half second and change faster than she was in Rio, and she’s ranked 5th in the world behind Russia’s Svetlana Chimrova (57.17) and Australia’s Emma McKeon (57.27). Chimrova had a dismal Rio performance, failing to make semifinals, while McKeon swam well in the semis only to wind up 6th in the final. The Russian has been under 57.5 five different times in 2017, though, and that consistency should put her in the final.

American Kelsi Worrell had great drops in the sprint free races at U.S. Worlds Trials in Indianapolis recently, but her 100 fly wasn’t at the same level. Her 57.38 is good for 7th in the world this year, but considering she seems to be in very good form otherwise, and her best is a 56.48, she definitely has more to drop in Budapest. In spite of missing the final in Rio – don’t forget that she had the 3rd-best time overall in 2016. It just came at the wrong meet (Trials)

Danish butterflier Jeanette Ottesen was not named to the Danish Worlds roster, for reasons unknown. There are still three more Europeans, though, ranked within the world’s top 12. Alys Thomas of GBR (57.81), Ilaria Bianchi of Italy (57.89) and Kimberly Buys of Belgium (57.91) are tightly-bunched, holding world ranks 10, 11, and 12, respectively. Meanwhile, Japan’s Suzuka Hasegawa and China’s Zhang Yufei are ranked 8th and 9th with respective times of 57.56 and 57.63.

Dark Horse: China’s Lu Ying. She finished fourth in Rio last year, but she barely broke 58 this year. Her 57.98 from Chinese Spring National’s was just under 58, but she’s certainly capable of a 56, which should easily make top 8 in Budapest.

With the exceptions of their Trials, Oleksiak hasn’t competed much this year, and she was previously injured, so even though she is the silver medalist at Rio, not sure what to expect here. If she is on form and been training well, she could definitely be on the podium. But no one is going to beat Sarah for the gold.

You think WR? I’m not sure without the butterfly specialization. But it’s in the cards of course.

Here’s something to think about as these ladies move towards Tokyo in 2020. Ikee, Oleksiak and Hasegawa are all 17.

One thing’s for sure, nobody’s going to be close to Oleksiak and Ikee at the World Juniors this year.

Not sure SS will necessarily drop a new WR in this event ….. but she doesn’t remotely need one to win this comprehensively.

Minors frankly look a lottery. Ikee most certainly deserves consideration. Oleksiak clearly must be considered on the grounds of her Rio medal but her 2017 form has not suggested her 2016 levels. Will Worrell find redemption after her Rio “miss” … another open question ? McKeon could potentially contend but her performances tend to be very variable even at the same meet. Really looks “anyone’s guess” for silver/bronze