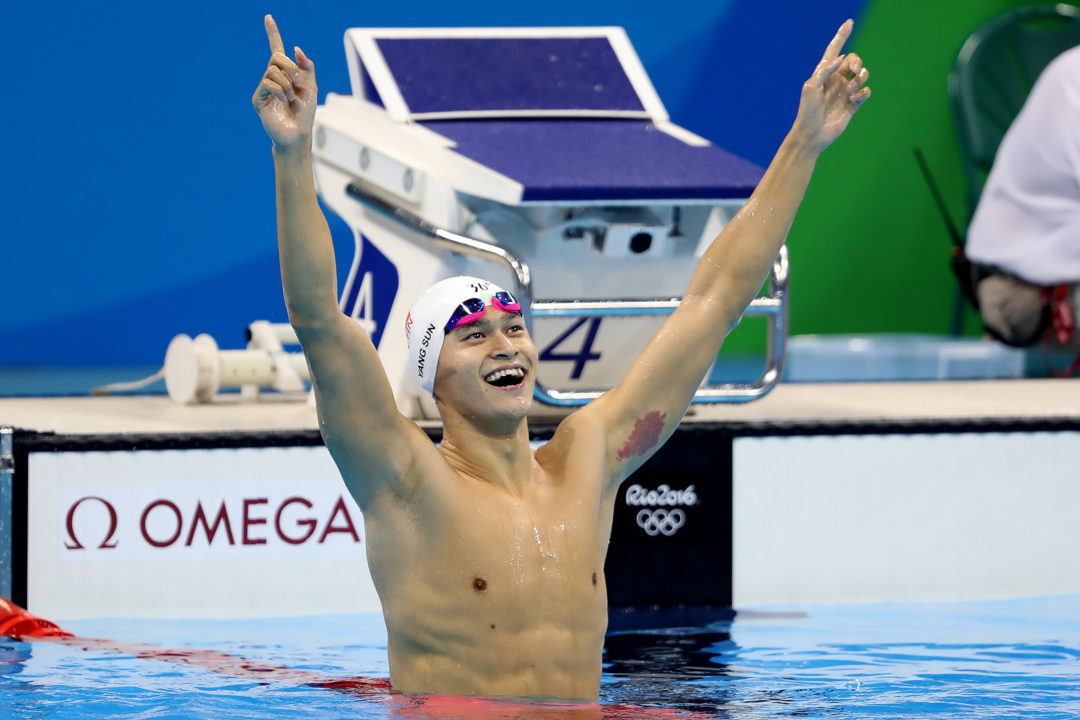 Sun Yang could win the 200, and could win the 800, but seems destined to take the 400 in his first head-to-head matchup with rival Mack Horton in Budapest. Archive photo via Simone Castrovillari

The World Championships field for the men’s 400 freestyle features many of the same well established names in the event, as well as some newer faces. With the top of the field featuring all three medalists from Rio, the battle for gold at Worlds should be another battle. In Rio, Australia’s Mack Horton and China’s Sun Yang separated themselves from the rest of the field early, and battled it out until the finish, with Horton taking the gold. However, I believe that Sun Yang will come into Budapest hungry and ready to reclaim his title in the event.

Sun, the second seed going into the World Championships, holds the fastest time in the 400 freestyle that has been swam in 2017, after going 3:42.16 at Chinese Nationals in April. His time from the meet made him the only man to go under 3:43 so far this year, which shows that he is in prime position to take the gold in this event. Being so close to his time from Rio before his biggest meet of the year is a good sign for him.

On the other hand, Horton’s fastest time from this season is 3:44.18, which he swam at Australian Nationals at around the same time. Horton will definitely go much faster than this time after getting a full taper for Worlds and being in the atmosphere of the meet, but I do not think that it will be enough to beat Sun and his closing speed that has made him so successful.

A darkhorse in this year’s field, and a swimmer who could surprise the field is Italy’s Gabriele Detti. Detti earned a bronze in this event in Rio, but he has already been under his time from Rio (3:43.49) in 2017 at the Italian Championship (3:43.36). Detti’s training appears to have improved over this year, which could put him right up there with Sun and Horton.

Americans Zane Grothe and Clark Smith are both competing in their first World Championship games in 2017, and will look to turn in strong performances as well. Grothe has turned in a very successful 2017 thus far, and he currently seeded 6th for this event. Grothe should be able to continue his improvement in this event, and move up in the field. Meanwhile, Smith looks to make more of a name for himself in the international swimming world, after obtaining his first international experience in Rio. Smith’s experience should help him on this stage, and will surely allow him to make it into the top 8.

As for the rest of the top 8, there are several men that could sneak their way into the final. Perennial favorites like Great Britain’s James Guy, South Korea’s Park Taehwan, and Australia’s David McKeon have shown great form going into Budapest, and should continue their prowess in the event. One athlete that could be a sleeper to make the final is Norway’s Henrik Christiansen. Christiansen is seeded 10th on the psych sheet for Budapest, and could easily jump up into the final.

Cant believe Thorpey is 35 now.
That swim in bathers in Perth in 1998 & was mind blowing.
I wished Thorpey went on to Beijing.The black dog put paid to that.
I want to say the black suit that he wore was not like the jaked suit in 2008 -2009.
The main thing now he is happy and still sponsored by adidas.
Look forward to him on 7 in Australia this week.

His suit was not like the Arena or jaked, but it was closer to an LZR racer.

Also I think he was done after 2004, that is why he retired. He tried to make a comeback but it was not to be 🙁

Left London comeback too late.
Needed 2 + years prep not 18 months.
I thought toureski was the wrong choice of coach.
But can understand why to get away fom the limelight.

It would be over optimistic prediction. Sun Yang is still good but I don’t believe he is able to go 3.41-sub again because the last time he did it was 5 years ago.James Guys, Detti, Horton….I also don’t think they are best shape in this year.
I hope Park will come back and do 3.42

I would like to see a world record to take off that retarded swim by Biedermann. I don’t think it will happen, but fun fact: Sun lifted his head up in 2012 which caused him to miss it.

I wouldn’t call that swim retared, beidermann was still a worlds medalist in 2011 in this event. Though sun would be the world record holder if he had taken one more stroke. He glided into the wall, which made the .08 difference

Biedermann was a phenomenal swimmer, but he could never break 3:42 without that suit. Imo Sun Yang is the true wr holder because Thorpe had a crazy suit advantage, thought not as much as Bidermann.

Realized that the info at the top has a typo; says Defending World Champ, Mack Horton, 3:44.60. Not sure where that came from.

Would love to see those times yang at 3:40 and Horton and detti at 3:41 what a fun fast final it would be if this predictions holds up however I don’t see any of them breaking 3:41 and I don’t see detti quiet that low more around 3:42 low

Sun Yang should win easily, probably with a sub 3:41.5. Not sure he can break 41.
Horton doesn’t seem in last year’s shape. I’ll be very shocked if he drops a pb here.
Detti is a safe choice for minor medal but I don’t think he has a 3:41 in him.
Park is an X factor. I believe he was tapered at last year’s Asian Champs. He hasn’t put a very solid time this year but he did beat Detti and Horton in Italy, so who knows?

Clark Smith and Zane Grothe are in the same prelim heat alongside Sun Yang and James Guy. Felix Aubock is also in that heat.

Clark and Zane will need to be at their best.