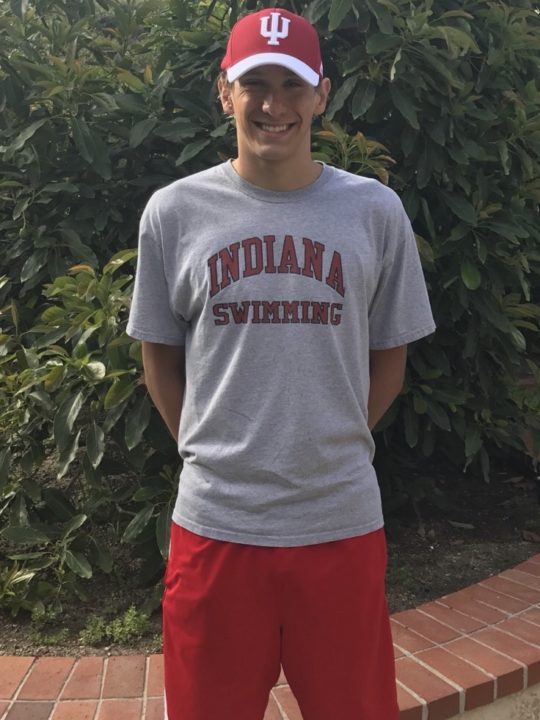 Michael Brinegar, who now swims for Mission Viejo Nadadores, will return to his native Indiana to swim for the Hoosiers in 2018-19. Current photo via Jamie Brinegar

Michael Brinegar, the silver medalist in the 7.5 km race at 2016 FINA Junior World Open Water Championships, has made a verbal commitment to Indiana University’s class of 2022.

“I am happy to announce my commitment to become an Indiana Hoosier beginning in the 2018-19 academic year.
I am excited to have the opportunity to train alongside and learn from 2016 Olympic Gold Medalists Blake Pieroni, Cody Miller and Lilly King as well as current USA World Championship team member Zane Grothe.  I am also looking forward to joining several of my former Indiana age group friends and competitors to train and compete together.
Having spent most of my life in southern Indiana, I have enjoyed watching the recent resurgence of Indiana Swimming under Ray Looze, highlighted by Rio Gold Medalists Pieroni, Miller and King.  The atmosphere of championship expectations is one I look forward to joining and I cannot thank Mark Schubert enough for preparing me for this next step.
GO BIG RED!”   —Michael Brinegar

Brinegar, who is an honorable mention on our list of top 20 boys in the high school class of 2018, moved from Indiana to Southern California in the middle of high school. He began at Columbus North High School, where as a freshman he won the 500 free in 4:24.92 and placed 8th in the 200 free at the 2015 IHSAA Boys Swimming/Diving Championship. The following year he was at Tesoro High School and swam under Mark Schubert at Golden West Swim Club. When Schubert took over the head coaching position at Mission Viejo Nadadores, Brinegar followed.

Brinegar won the 800 free at 2016 Summer Junior Nationals, and has been a member of USA Swimming’s National Junior Team for the last two seasons. He will represent Team USA at 2017 FINA Junior World Championships in the 800 and 1500 freestyle events.

Isn’t his mom a former olympic swimmer who also trained with Schubert back in the hey day of MVN? She maybe even went to IU too? not positive on this maybe the author can research it?

You’re correct. His mom is Jennifer Hooker who competed in the 1976 Olympics. She also swam for Indiana.

Thanks…I thought that was it! Still got some memory left.

Great pick up for Hoosiers. They are getting top recruits and will be dangerous.