2017 NSW Day 1 Finals: Cate Campbell, Seebohm Back On Top Of The World 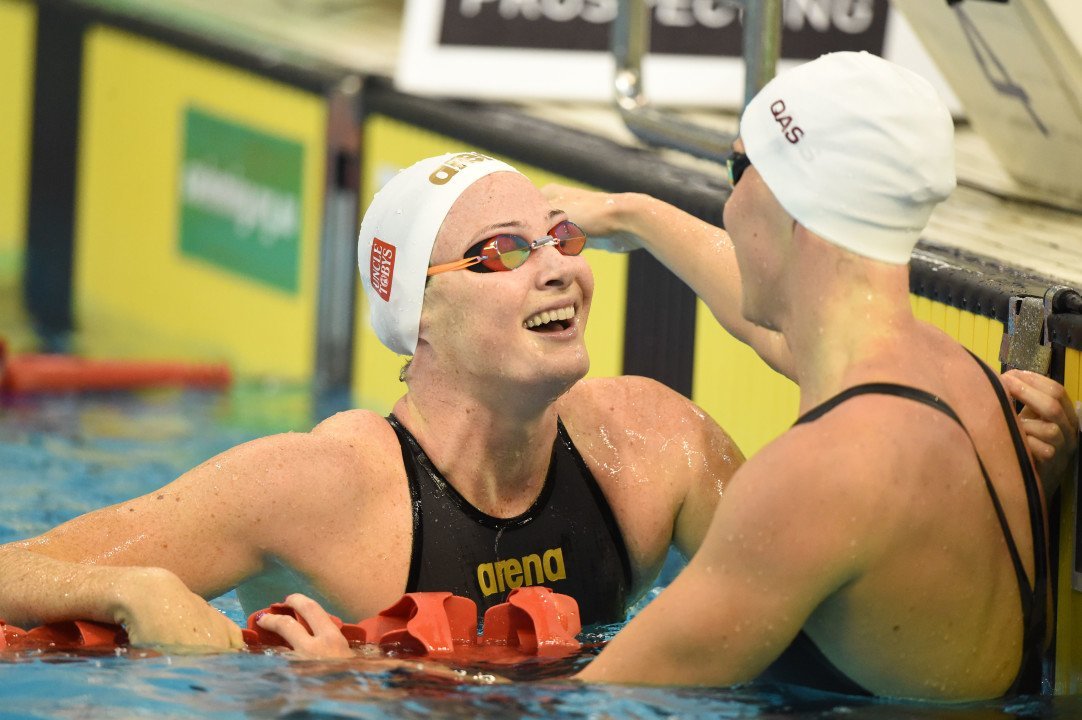 Cate Campbell took gold in the women's 100m freestyle at NSWs, making her way to the top of the world rankings in the process. Archive photo via courtesy of Swimming Australia

The first prelims session of the 2017 NSW State Open Championships did not disappoint, with Bond swimmer Cameron McEvoy rocking a world’s best 100m freestyle time of 48.13 to kick-off the 3-day meet. Although McEvoy would slow down just a tad during finals to stop the clock at 48.46, even that super speedy mark is enough to have notched the 2nd-fastest time across the globe so far this season and still check-in ahead of American Nathan Adrian’s 48.66 from last night in Indianapolis.

As reported yesterday, reigning Olympic champion in the event, Kyle Chalmers withdrew from the 100m free due to suffering from a respiratory infection. It’s doubtful he’ll swim the 200m freestyle at this point either, according to his coach Peter Bishop. Korean champion Park Tae Hwan was also slated to compete in the event, but was a no-show during prelims. In their stead, 18-year-old Jack Cartwright put his speed on display, registering a silver medal mark of 49.32. That’s the 4th best time of the 2016 Junior Pan Pac gold medalist’s short career, one that includes a mighty 48.91 from those championships.

The world rankings were rattled once again on the women’s side of the 100m freestyle, with 24-year-old world record holder Cate Campbell clinching the win in a very brave 53.15. Campbell is coming off of both a mental and physical break from swimming after having missed the podium in Rio individually despite entering the 2016 Olympics as a highly regarded favorite to take the gold. Resting both mind and body from injuries, however, Campbell is reportedly back in the pool only ‘part-time’ as this point, so for her to produce a 53-low one month out from Budapest-determining National Championships is certainly a positive indication for her.

Sweden’s Michelle Coleman snatched up the runner-up position tonight, clocking an impressive mark of 53.68. Not only does that outing now check-in as a world top 5 time, it’s the 3rd fastest time of Coleman’s career.

Two other women this morning also came in under 54-seconds, with 3rd place Bronte Campbell, younger sister of Cate, and 2016 Olympic 200m freestyle bronze medalist Emma McKeon touching in 3rd and 4th, respectively. Bronte’s 53.73 is just .02 off what the double world champion produced in Rio, and was rendered tonight after having dealt with multiple injuries. McKeon stopped the clock in 53.79, another solid outing from the St. Peters Western swimmer.

2016 Olympic champion Mack Horton was able to overtake his countryman David McKeon in an exciting 400m freestyle battle that came down to less than half a second differential between the two Aussies. McKeon led through the 350m mark, but Horton’s final split of 27.43 helped close the gap and ultimately put the 20-year-old on top in a time of 3:49.54. He was 3:49.94 at this same meet last year, an Olympic year, so it appears Horton is in a good place heading into the final stretch before National Championships. For McKeon, he earned silver just behind in 3:49.87 for the only other sub-3:50 mark of the field.

2015 double world champion backstroker Emily Seebohm nabbed two event wins tonight, taking both the women’s 50m butterfly and 200m backstroke. Seebohm earned her first victory in a swift 26.41 over McKeon’s 26.46 in the 50m butterfly, then topped that performance with a gold in the backstroke stopping the clock at 2:08.77. In the latter, Seebohm held on for the win over Melbourne St. Vicentre swimmer Sian Whittaker by just .02 of a second, with Whittaker scoring a mark of 2:08.79. Seebohm led at the 100m mark in 1:03.21 and earned a 1:05.56 on the back half to take the win in the top time in the world. Whittaker’s 2:08.79 now sits as the #2 time worldwide this season.

Of note, 15-year-old Kaylee McKeown produced a personal victory in the form of a new personal best, touching in 2:09.18 for 3rd. Entering the meet, her career record was the 2:09.60 from last year’s pre-Olympic Grand Prix, but she lowered that effort by almost half a second today.  That time also remains as the Aussie 14-year-old age group record, while her time today is now within a second of Minna Atherton’s 15-year-old age record of 2:08.23.

The men’s 50m backstroke saw Japan’s Junya Koga crank out the world’s best time with a meet victory of 24.53. That dethroned China’s Jiayu Xu, who previously held the quickest time in 24.65. The top Aussie in the event tonight was Ben Treffers, who spun his arms to a time just under 25 seconds, stopping the clock at 24.98 for silver. With Koga’s swim, he actually overtook Treffers’ previous All Comers mark in the event, beating it by .01.

Visiting Russian swimmer Yulia Efimova hacked off about 2 solid seconds from her 100m breaststroke prelims time to clinch gold tonight in the race. After a modest (by the 2016 Olympic silver medalist’s standards) 1:08.54 this morning, Efimova threw down a 1:06.55 to earn the #2 spot on the world rankings.

The next closest Aussie finisher was Jessica Hansen of Nunawading, who took silver in 1:07.41 with Olympic finalist Taylor McKeown 3rd in 1:07.57.

As a testament to desperate need of a go-to butterflyer for the Aussies, the highest place finisher in the men’s 200m distance of the discipline was Theodoro Benehoutsos of Melbourne Vicentre. The 18-year-old tied for 3rd with Japan’s Mutsuki Iwata, each touching in 1:58.77. The top two swimmers were foreign with Korea’s Taegue Lee and Japan’s Yuya Sakamoto finishing in times of 1:57.34 and 1:57.93, respectively, for gold and silver.

3
5
0
6
newest oldest most voted
Heard this before

Valid points but for how much longer ? Much is a product of AUS geography and being on opposite seasons to the overwhelming majority of its prime competition.

Hopefully this will be the last year where AUS still operates on its traditional summer season before switching to one more mirroring the Northern Hemisphere with Trials much closer to the major event … thus removing the traditional hazard of requiring 2 separate preparations/peaks. Whether they WILL have the nous to roll it out in 2018 with PP as the focal meet rather than Toytowns remains to be seen.

Very true but there is no one sole factor but rather any number of factors. A lack of high quality racing leading to sub-standard race skills has been another key factor. Within that, there are any number of “threads”, many interlinked. NZL only ever produces a couple of truly intl class swimmers at the one time and the nearest major competitors (geographically) are CHN & JAP (both Nthn Hemisphere). A stronger bilateral swimming partnerships has been developing with JAP but can/must be further leveraged There is no collegiate sports system in AUS & AUS university funding/AUS overall sporting picture is such that one is unlikely to ever be established. Few if any top line AUS swimmers take the US collegiate… Read more »

Unless your name is Thorpe, Hackett, Rice, Chalmers, etc.

My read: M400FR & 200FLY: nothing of any real significance. M50BRS: Dual 27.76 from Wilson pleasing particularly given his current gearing towards 200 (recent 2.09.6) and possible indicators of a significant drop in his 100 PB either here or at Nats. M100FR: With Chalmers a no show, zero stimulus for McEvoy. Whilst Chalmers (if fit/healthy) & McEvoy should be faster at Natls; not seeing any other sure fire sub49s. With the exception of Cartwright (who may hopefully step up over next 12 months), still seeing the same old names/faces who’ve never really stepped up. This lack of depth costly for any M4X100 prospects. W800FR: Ashwood significantly slower than 2016 “in season” but not necessarily significant. Will be interesting to see… Read more »

My dream for tge Rio set is that they do not become psychos . That is all .

I’m more impress from 18-year-old Jack Cartwright than Mcevoy.
Let’s see if he keeps progressing like in the last season.