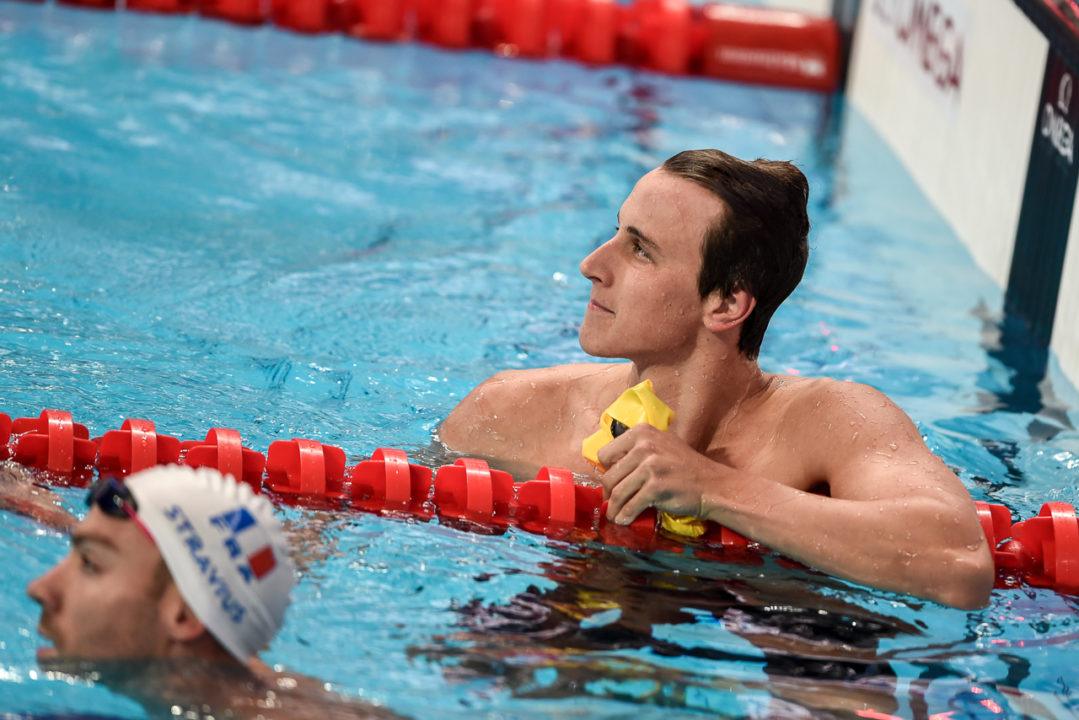 Just one session of the 2017 NSW State Open Championships in Sydney has concluded and the world rankings have already been rattled. The fastest 100m freestyler ever in a textile suit, Cameron McEvoy, made his presence known early in this pre-National Championships tune-up event, taking the 100 free event top seed in convincing fashion. 48.13 is what the 22-year-old athlete known as ‘The Professor’ for his physics-oriented studies registered in prelims, claiming the pole position by over a second. The next closest was veteran James Roberts, who notched 49.24.

For McEvoy, his morning outing already outdid what American rival Nathan Adrian produced in his post-Rio debut at the Arena Pro Swim Series in Indianapolis, which is running simultaneously. Adrian nabbed the gold in Indy in a mark of 48.66. McEvoy and Adrian are now positioned as the world’s top 2 swimmers in the event his season, with McEvoy’s final yet to go.

The reigning Olympic gold medalist in the event, 18-year-old Kyle Chalmers wound up not swimming the event, as was the case with Korean national champion Park Tae Hwan. We are checking into the no-show circumstances and will report once known.

A heroic effort characterized the effort by 24-year-old Cate Campbell, the current 100m freestyle world record holder who has battled back from a disappointing Rio performance individually and post-Olympics injury recovery. Her prelim effort of 53.58 checks in as 3rd fastest in the world and is just .3 of a second off of her 53.24 time from Rio that rendered her as a 6th place finisher. That should give Campbell a confidence boost heading into tonight’s final, one that will include Swedish speedster Michelle Coleman and Olympic bronze medalist in the 200m freestyle, Emma McKeon. Both Coleman and McKeon each notched 54.07 to tie for the 2nd seed, with Cate’s sister and 2015 double world champion Bronte Campbell just behind in 54.20.

He set the textile world record next to Chalmers. Just saying.

That was before Kyle Chalmers won gold in Rio. Not anymore. I’m just saying.

They haven’t even raced since Rio hahahaha

At what other meet after Rio did he go slow ? Just asking

Chalmers was there at nationals last year when he went 47.0

Yes….he was there at nationals. McEvoy got the 47.0 and Chalmers got the gold in Rio. You have to be able to perform when it counts the most. And that’s every 4 years at the Olympics. And Kyle Chalmers stepped up when it counted the most and took it from McEvoy.

The more he dominates non-olympic meets the more everyone scratches there head about Rio. Although I guess that’s half of the Australian team.

That’s a very fast time… I think out of all the 100 freestylers in the world right now McEvoy has the best chance to break 47 out of them just because he has the perfect mix of speed and endurance. 21.4 in the 50, 1:45.4 in the 200. Who else can do that? I think he’ll be much better from now on since he’s gone in as a favorite to a big meet, he should learn to preform under pressure.

While I get the reasoning – If 50/200 times were a faultless indicator of 100s, Sjöström would be streaking Care Campbell day in, day out. Stroke rate/economy is far more important. Cate Campbell’s sprint stroke/kick is mind-blowingly ecinomical when you watch under-water footage. Sjöströms 50 & 100 strokes don’t look like the same swimmer – Her sprint is not conducive to 2 laps.

Chalmers looks to have an ideal economy & dps.