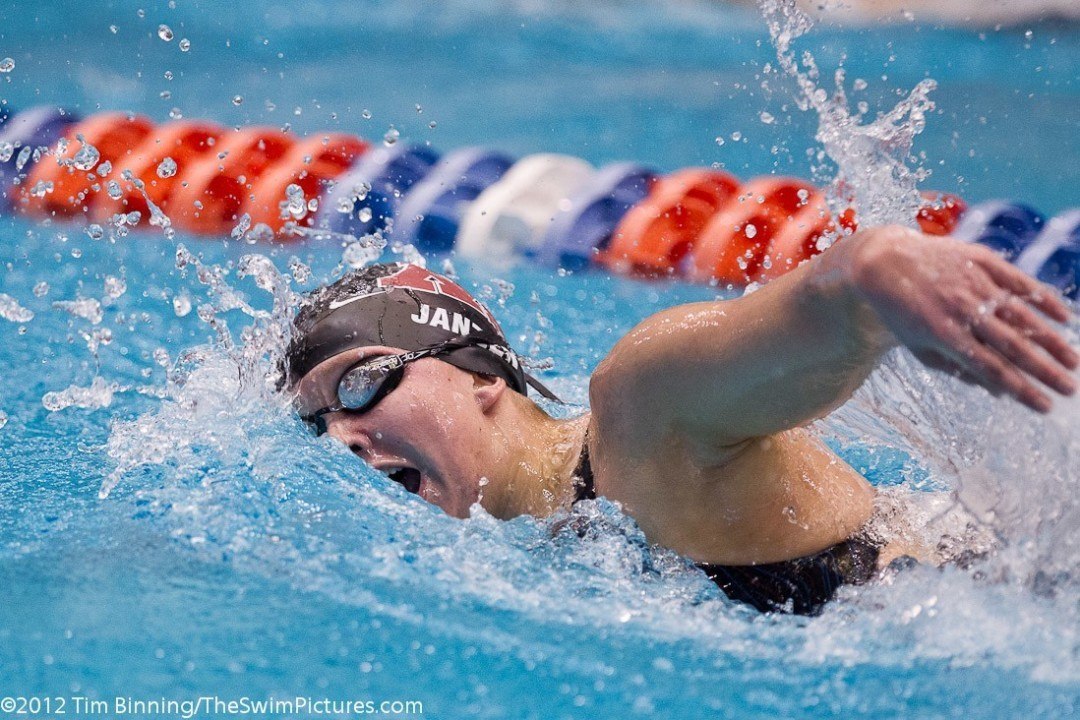 COLUMBUS, OHIO – With the University of Minnesota – originally ranked no. 19 – ahead of no. 13 Indiana by... Current photo via Tim Binning/TheSwimPictures.com

COLUMBUS, OHIO – With the University of Minnesota – originally ranked no. 19 – ahead of no. 13 Indiana by nearly 50 points, the Golden Gophers will be heading into the last day of prelims hoping to secure another (including 2012, 2013, and 2014) B1G championship.

Although no. 15 Michigan and no. 21 Wisconsin finished night one of finals with the first and second place spots, respectively, Minnesota and Indiana have made a roaring comeback – displacing Michigan and Wisconsin to their respective third and fourth place spots.

As we go into the last day of prelims, here are current B1G team scores:

Kennedy Goss  – an Indiana freshman seeded third in the 2-back, has scratched from prelims of the event. In addition to Goss, the 12th and 14th seeds – Brooke Zeiger (Minnesota) and Kathryn Rowe (Penn State) – have also scratched from the 200 backstroke.

Other significant scratches come in with 12th seeded Amy Bopp – of Ohio State – scratching in the 200 fly.

Brooke Snodgrass (Indiana) took home last year’s 200 back title – swimming a 1:52.49 in prelims then dropping down to a quick 1:51.43 in finals. Snodgrass won by over three seconds last year, however, she is the second seed going into tonight’s finals.

First seed goes to Michigan freshman Clara Smiddy – who was seeded with a 1:52.24 then swam a slightly slower time of 1:52.68 – beating Snodgrass in prelims by nearly half a second. Third seed goes to IU senior Alex Day with a 1:54.17.

Believe it or not, the A final is made up of entirely Indiana and Michigan swimmers. So who will take the B1G 2-Back title tonight – Snodgrass for Indiana or Smiddy for Michigan?

:47.58 and Ivy Martin has repeated history! Just as she broke the B1G 100 free record during prelims last year, the Wisconsin senior has done it again! Martin was the only woman under :48.00 – swimming a :47.58 at prelims. Last year, however, Martin swam a record-breaking time of :48.05 at prelims then came back that night and lowered her record by over a quarter of a second. Will Martin get under :47.00 tonight?

Penn State junior Alyson Ackman – who finished second last year – is going into the finals seeded fourth – just :00.05 and :00.08 behind the second and third seeds, respectively. The second seed belongs to Michigan junior Alex Deloof – who finished 18th in prelims last year but did not swim in finals. Lauren Votava – of Minnesota – took the third place seed, higher than her tenth place finish in this event last year.

Check back tonight to see if Ivy Martin will lower her 100 free record – set this morning in prelims!

Minnesota junior Kierra Smith is back and ready for a B1G record!

Last year, Smith won the 2-breast by nearly three whole seconds. While Smith went into finals with a 2:09 last year – she has dropped down to a prelims time of 2:06.43 this year – putting her ahead by nearly four seconds.

Melissa Rodriguez of Penn State took second with a 2:09.54. Rodriguez is seeded a bit slower than she was last year – coming into the finals with a prelims third place finish of 2:10.43

Freshman Emily Kopas (Michigan) might be Rodriguez biggest competition – as she takes the second seed with a slightly-faster 2:10.15. Taylor Vargo – a sophomore from Ohio State – finished fifth in the finals last year and is seeded just behind Kopas in fourth.

Katelyn Sowinski (PSU) – who added nearly four seconds and finished eighth in the A final last year – swam a 1:56.52, giving her the second seed time going into the finals.

Will Sowinski and Rowe switch places (again) tonight? Will Dalesandro break her B1G record? Check back here for finals tonight!

SwimSwam’s got you covered for all things B1G! Check back here for the last night of finals

Indiana is going to beat out Minnesota it looks like!!

It’s definitely going to be an exciting night!

Right now without the relay or diving the projected score would be IU 520 and Minnesota with 501.5 at the end of the night. If you project diving at 35 points for Minn and 25 for IU it’s at 545 to 536.5 going into the last relay. It should make for a really exciting night.

If you score out the psych sheets of the 1650, things get even closer – by my count, it would be Minnesota 537.5, Indiana 534 heading into platform diving and the 400 free relay.