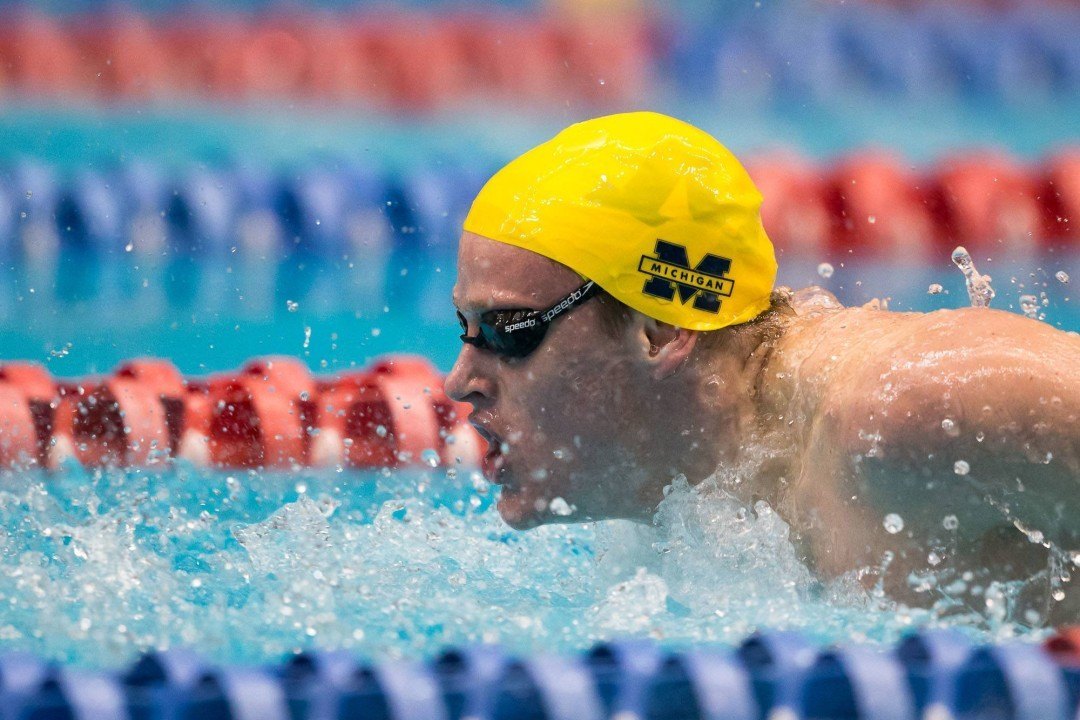 Dylan Bosch and the Michigan Wolverines will look to defend their Big Ten title on the final day of the Big Ten Championships Archive photo via Tim Binning/TheSwimPictures.com

Ohio State scored two big wins last night, from Matt McHugh in the 100 fly and Josh Fleagle in the 200 free. However, Michigan still holds an 81 point advantage over the Buckeyes. Indiana sits in third place but have the top 100 freestyler in the conference in Anze Tavcar. The last prelims session of the meet features the 200 yard strokes, 100 freestyle, and platform diving. Follow along by refreshing this page as it is updated after every event. Our new live Twitter account, @swimswamlive, will also provide up-to-the-second updates.

Michigan’s Tristan Sanders will lead the pack in the A final of the 200 backstroke after posting a 1:40.90 in the prelims. Sanders swam next to Drew Teduits of Wisconsin, who is seeded sixth with a 1:42.20. Teduits came in as the top seed with a 1:39.72, so look for him to be faster this evening. 100 backstroke champion Nate Savoy of Penn State is seeded second with a 1:41.03.

Following Savoy are a trio of Ohio State seniors, Rowan Williams, Steve Zimmerman, and Connor McDonald. Williams touched out in 1:41.59, Zimmerman in 1:4160, and Macdonald in 1:42.03.

Aaron Whitaker swam a 1:42.47 from heat one to take the seventh seed, and Austin Byrd of Wisconsin will join Teduits as the eighth overall seed with a 1:43.07.

Bruno Ortiz will lead the field tonight after a 42.46 to break the pool record. Ortiz opened with a 20.28, and was 10.96 over his third 25 enroute to the top overall seed. Cannon Clifton of Wisconsin will be the second seed with a 42.73. Blake Pieroni of Indiana is the third overall seed with a 42.78, joined in the finals by his teammate Anze Tavcar, who had the top seed coming into the meet.

Fleagle falshed some speed early with the second fastest opening 50, 20.31, but faded slightly and will be the fourth overall seed with a 42.79. Right behind him is defending champion Shane Ryan of Penn State, who was 42.80.

Michael Disalle joins Fleagle in the A final with a 42.95. Paul Powers rounds out the top eight with a 43.21. Minnesota’s Daryl Turner and Michigan’s Justin Glanda are the top two seeds in the B final in 43.28 and 43.54 respectively.

It appears Indiana junior Tanner Kurz picked up Cody Miller’s 200 breaststroke duties. Kurz will push Funk in the finals. Kurz was also under a minute in his second 100,with a 59.25, to finish in 1:54.25. Nick Schafer of Wisconsin rounds out the top three with a 1:54.65.

The competition drops off slightly from there, and the race will be for fourth through eighth, as just .15 hundredths separate fourth seeded Roman Trussov and eighth seeded DJ MacDonald. Trussov holds the fourth seed in 1:55.45. Jakub Maly sits just a hundredth behind him with a 1:55.46, Liam Dias will swim from the sixth seed with a 1:55.52, and Marat Amaltdinov is the seventh seed in 1:55.60.

It’s Dylan Bosch’s race to lose. The Michigan senior will be the number one seed in tonight’s finals by over a second. Bosch led the pack in 1:42.12 while his teammate, freshman Evan White, was second in 1:43.42.  Steve Schmuhl of Indiana and Tamas Gercsak of Ohio State will challenge White after swimming 1:43.70 and 1:43.74 in the prelims, respectively.

A pair of Purdue swimmers will round out the top eight. Daniel Conway and Guillermo Blanco will swim in lanes one and eight after going 1:45.30 and 1:45.35, respectively.

James Conner dove his way to the top spot in the championships finals of the platforms with 485.75 points to his credit. Second fell to Purdue freshman Steele Johnson and third to Minnesota sophomore Eric Barnard.

Iowa’s Addison Boschult will be the fourth seed in the finals, the first diving finalist not from Ohio State, Indiana, Purdue, or Minnesota. A trio of Purdue seniors occupy spots 5-7. Nathan Cox, Sean Mokhtari, and Jamie Bisset all qualified for the finals. Dylan Zoe of Minnesota finished eighth and secured the final spot in the finals.

200 Fly… Dylan Bosch is a JR. Michigan graduates Bruno, Funk, and Glanda this year along with two divers who don’t score points.