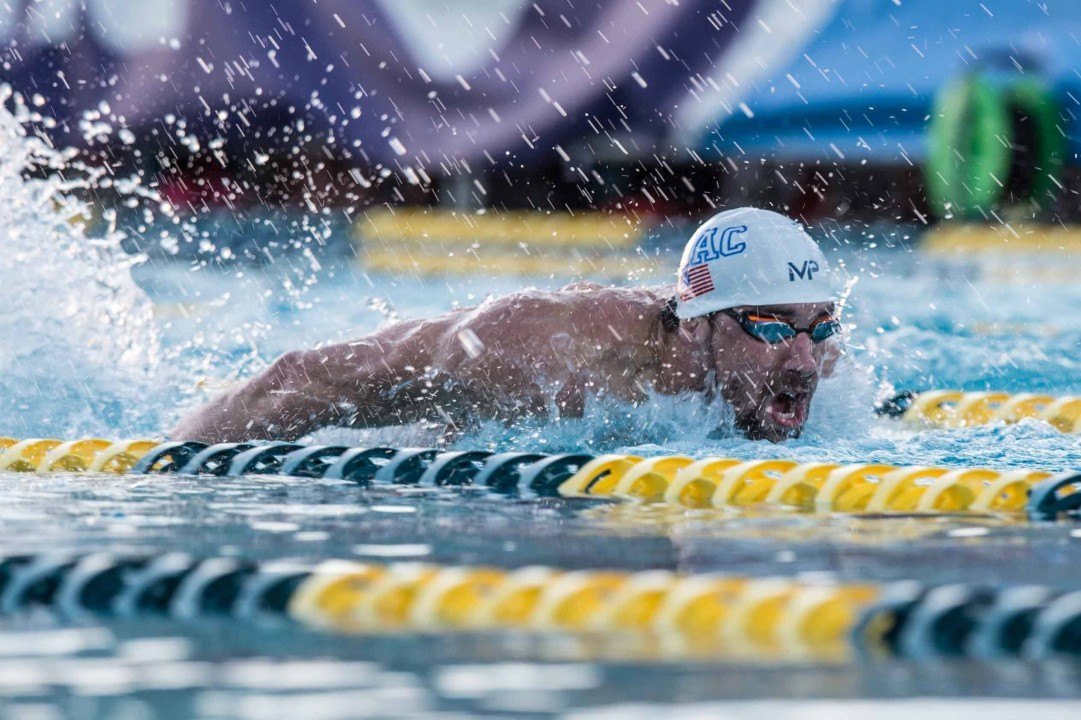 Barring a disqualification, Michael Phelps and Ryan Lochte will meet in the finals of the 200 IM at the Arena Pro Swim Series Mesa. Current photo via Mike Lewis/Ola Vista Photography

Day four of the Arena Pro Swim Series will feature another Lochte-Phelps showdown, as two of the sport’s biggest names will meet in the finals of the 200 IM, barring any disqualifications. Lochte holds the top spot in the final heat of the morning, with Phelps set to swim in lane four of heat seven of eight. Phelps is seeded at a 1:56.04, Lochte enters with a 1:54.98. Conor Dwyer is the third overall seed with a 1:57.41.

Today will also showcase Katie Ledecky in the 800 freestyle. Ledecky already catapulted to the top of the women’s 1500 meter world rankings, and will likely do the same in the 800. Keep refreshing this page as it will be  updated after each event with live recaps.

Katinka Hosszu will be the number one seed heading into finals of the women’s 200 IM with a 2:13.28. However, the bigger story was Kirsty Coventry. Coventry put down a 2:15.36, good for the fourth overall seed and the fastest time of her comeback so far by half a second.

Louisville’s Tanja Kylliainen will swim from the sixth seed with a 2:16.73, followed by 17 year old Katie McLaughlin in seventh with a 2:18.02. Rounding out the top eight is Vien Nguyen, who touched the wall in 2:18.96.

Ryan Lochte, the world and American Record holder in the event, paced the field with a 2:01.93. Lochte will swim next to Conor Dwyer and Uvis Kalnins, who qualified in 2:02.20 and 2:02.91, respectively.

A 2:04.14 from Matthew Josa was good for the fourth overall seed.

Michael Phelps‘ comeback year hasn’t been as fast as last year’s. Phelps touched the wall in 2:04.16, good for the fifth seed.

Marko Blazevski will be the sixth seed. The SwimMAC product touched in 2:05.36. Carlos Claverie, another Louisville swimmer, is seeded seventh in 2:05.90.

Phelps’ North Baltimore teammate Austin Surhoff rounds out the top eight with a 2:06.17.

For the second event in a row, Hosszu and Coventry once again led the qualifiers into tonight’s finals. Hosszu swam her prelims in 2:11.7, 2.9 seconds off her seed time, while SwimMAC’s Coventry dropped .9 to qualify in 2:12.29.

Iryna Glavnyk of Grand Canyon University was the third-fastest out of prelims with 2:13.31, just ahead of Stanford Swimming’s Maya DiRado, who clocked a 2:13.38.

Tyler Clary of SwimMAC had a strong morning showing, winning his heat by a large marging and putting up the fastest qualifying time with 2:00.66. Connor Green swam next to Clary and was the only one anywhere near the leader, staying just off Clary’s feet throughout. Green was second overall with 2:01.94.

Arkady Vyatchanin of NYAC and Jacob Pebley of Cal won their respective heats in a respective 2:02.32 and 2:02.48. They will be in lanes 3 and 6 in tonight’s final.

The first of the circle-seeded heats featured an excellent battle between Abbey Weitzeil of Canyons Aquatic Club in lane 5 and Katie Ledecky of Nation’s Capital in lane 3. Weitzeil turned at the 50 wall with more than a half-second advantage over Ledecky, but Ledecky nearly caught her on the back half. Weitzeil posted a 55.29; Ledecky, 55.37.

In the next heat, Cal’s Natalie Coughlin went 54.18, edging SwimMAC’s Arianna Vanderpool-Wallace by 20/100. Coughlin posted the 16th time in the world so far this year. In prelims.

Simone Manuel won the final heat in 54.20, making her the second seed going into tonight’s final, after Coughlin’s 54.18 and just ahead of Vanderpool-Wallace’s 54.38. Manuel now holds the 18th time in the world this season.

Fourth and fifth in tonight’s final will be Weitzeil and Ledecky. Margo Geer of Ford and Lia Neal tied for sixth with 55.40, while Amanda Weir of SwimAtlanta qualified eighth in 55.43.

Chris Szekely‘s winning time in heat 6 of 50.82 held up as the fastest qualifying time all the way throught to heat 12, when Josh Schneider of NYAC and Renzo Tjon A Joe tied with 50.10 to take over the lead. Also in that heat, Tucson Ford’s Matt Grevers moved into contention with 50.37.

In the next heat Ryan Lochte of SwimMAC and Emmanuel Vanluchene became the first to break 50 seconds, touching in 49.88 and 49.93, respectively. Conor Dwyer won the final heat in 50.00, with Michael Phelps of North Baltimore just behind in 50.15.

The top eight for finals will be Lochte, Vanluchene, Dwyer, Schneider, Tjon A Joe, Phelps, Grevers, and Tim Phillips of SwimMac in 50.45. Szekely wound up 10th, just behind Javier Acevedo (50.80) and just ahead of Ryan Hoffer, who went 50.87 to tie for the 13th-fastest time ever swum by a 16-year-old boy. Previously he had been at number 31 on the top-100 list.

With the fastest heat of women’s 800 freestylers scheduled to swim in finals, the second-fastest group began the morning session. Tjasa Oder won the first heat in 8:48.28. Madelyn Donohoe of The Fish won a tight race against Guatemala’s Valerie Gruest, 8:51.93 to 8:51.98.

There must be something special about lane 6. In heat 3, Felipe Tapia of Chile followed his previous lane-holder’s lead and got out way in front very early, swimming alone against the clock for most of the 30 laps. Tapia reached the wall in 15:52.36, taking 10.6 seconds off his seed time. Nick Hogsed was within a second of his best, finishing in 15:58.85, while Mission Viejo’s Shane Forker placed third in the heat with 16:02.23, less than 5 off his best. Nice early-season swims for all three.

The final heat, Juan Tolosa got the win in 16:02.59. Tolosa had been the last of a rather tightly-bunched quartet through the 400. He moved up a spot, but the four continued to turn together through the 700, when Tolosa began to descend. He took over the lead at 750 and then moved from 32-mids to 31.8s or so, adding more and more distance between him and the rest of the leading pack. Thomas Ottman of Scottsdale finished second in the heat in 16:13.11, his best by 12.3 seconds. Third was Drew Eisen of Life Time Arizona, who dropped 28.5 seconds to come to the wall at 16:15.25.

Yeah I’m really disappointed so many swimmers scratched finals. turned the women’s 100 into a snoozer, among other things. I can maybe see cutting Manuel and Neal a little slack since they’re still in school, catching up after NC2As and maybe getting close to finals, but what excuse do the pros like DiRado and Coughlin have?

Clary gains more of my respect every time I watch him compete!

Since his incredible win at Pan Pacs last year over Irie + that insane anchor for Team Usa on that 800 free in Doha , I feel greater respect for Clary too . Toughest dude out there but with high quality swims .

But Clary is sticking with the 1500 and 200 back double tonight? That’s awesome.

Same here! I thought the point of having the meet end on Sat night was to allow for Sun travel home. Ugh! 🙁

Coughlin’s Twitter says she and a bunch of other swimmers are scratching out of finals.

Encouraging prelim swim from Coughlin; moving her up from 30th to 16th in the world and putting her in the mix for podium or win at Pan Ams, at age 32. Fast prelims swim is always good practice for the international stage, and Im interested to see if she can hold on and better it tonight, give Manuel and AVW and run for their money.