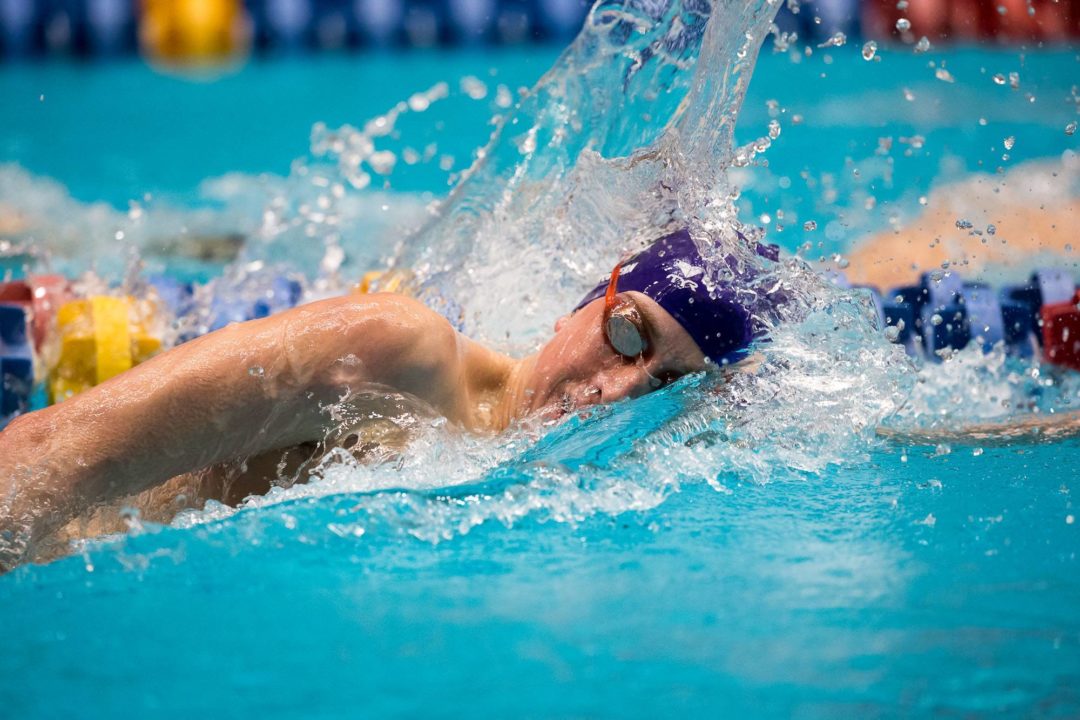 The 2015 Men’s Big Ten Championships have concluded in Iowa City. Here are 5 Big Things we noticed on Day 4:

1. Bosch’s cross-country 200 fly duel: Michigan’s Dylan Bosch is the defending NCAA champ in the 200 fly, but he’s had his hands full in staying atop the throne this season. Texas sophomore Jack Conger blew up earlier in the week, breaking Bosch’s US Open record in a time trial. Bosch, clearly not fully rested for this meet, responded with the nation’s second-best time tonight in 1:40.75. But not twenty minutes later, Conger’s freshman teammate Joseph Schooling fired off a time that just displaced Bosch for second at the Big 12 meet in Austin. Needless to say, this year’s 200 fly at NCAAs should be a stellar showdown with Bosch and Schooling, plus likely Conger, if he swaps the 200 back for the 200 fly at nationals.

2. Wilimovsky takes over Big Ten distance: For years now, the Big Ten has had one of the nation’s premier distance men in Michigan’s Connor Jaeger. But in the first season since Jaeger’s graduation, it appears a new power has risen: Northwestern’s Jordan Wilimovsky. Wilimovsky blew out the field in tonight’s mile, going a wicked 14:33.50 that makes him #1 in the nation by well over five seconds. With the top two finishers at the 2014 NCAAs graduated, Wilimovsky now looks like a potential national title favorite. In addition to symbolically taking over the torch for Jaeger, Wilimovsky actually broke Jaeger’s pool record set back in 2012, the last time Iowa hosted the Big Ten Championships.

3. Fresh faces on the boards: The diving events this season looked almost entirely different from 2014 in the Big Ten, with a number of notable newcomers having immediate impacts. The obvious one was Texas transfer Michael Hixon, a two-time NCAA champ last year as a freshman who won the 1-meter title for Indiana this week. But he was actually overshadowed by Australian freshman James Conner, who won the other two boards, including tonight’s platform event. Meanwhile Purdue’s Steele Johnson, another freshman, was second on all three boards, giving the Big Ten the nation’s youngest, and perhaps toughest, diving corps.

4. Michigan’s 400 free relay statement: The biggest win for the Wolverines tonight came in the 400 free relay, where this team showed it could stack up against the best teams in program history. The 400 free relay of Paul Powers, Justin Glanda, Anders Nielsen and Bruno Ortiz went 2:50.14 to smash the Big Ten meet record held by last year’s team (4th overall in the NCAA as a team), and also sneak under the program’s own Conference Record from 2009. That team, swimming at the height of the super-suit era, featured two U.S. national teamers in Bobby Savulich and Chris Brady, plus a certain future Olympic gold medalist named Tyler Clary. That swim for the 2015 Michigan men proved that this team can stack up against the best programs in team history, including the 2013 team that won a national title – that crew’s 400 free relay was four-hundredths slower than this 2015 one.

5. Closest finish in four years: It’s been a long and dominating run for Michigan, who have now won every Big Ten Championship for half a decade. But tonight’s team finish was the closest any other program has come to Michigan since the beginning of that streak in 2011. The Ohio State Buckeyes finished 137 points back of Michigan, cutting last year’s final margin in half. Here’s a look at the winning margins of the last 6 Big Ten men’s meets:

That makes this the closest meet since 2011, and though Ohio State graduates a large crop of high-impact seniors, it also suggests that slowly but surely, the rest of the conference might be catching back up to the dominant Wolverines.

How about Swimswams huge inaccurate prediction of 8th place for Purdue?

JMan – you’re right. Despite trying to keep tabs on the weekly developments and news within 20-some Division I conferences (plus D-II, D-III, and NAIA) at the same time, we at SwimSwam do occasionally find ourselves unable to correctly predict the future.

We’re hoping the infallible crystal ball we ordered from SkyMall arrives in the mail by NCAAs. 🙂