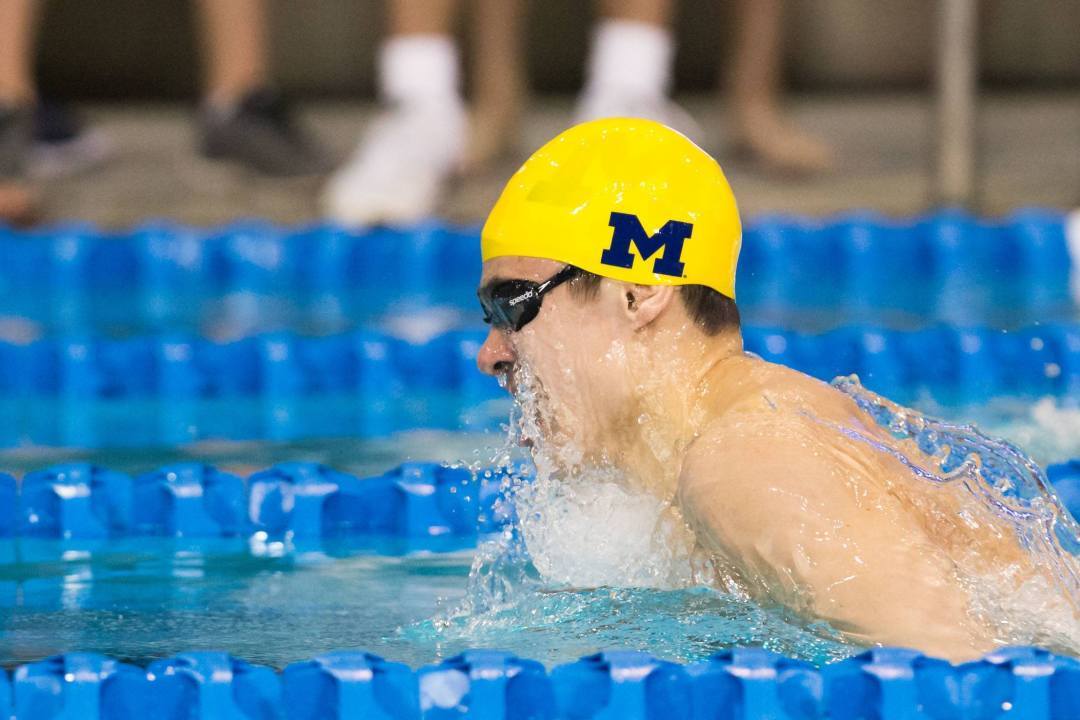 Richard Funk is the top seed in the 200 breast, one of 7 Michigan Wolverines in A finals tonight as the team looks primed for its 5th-straight Big Ten title. Archive photo via Tim Binning/TheSwimPictures.com

The leaders matched pace nearly exactly at the final prelims session of the 2015 men’s Big Ten Championships, with both Michigan and Indiana putting 7 swimmers into A finals.

One of the big stories so far has been the “relatively close” race at the top of the conference. We put that in quotes because, while an 81-point Michigan lead is far from a tight team battle, it’s also a trend back towards closeness in a Big Ten that Michigan has completely dominated for the past four years, including one national championship team in 2013.

The Wolverines and Buckeyes maintained almost exactly the same momentum at day 4 prelims, with each team putting 7 swimmers up. Michigan holds a slight edge with 5 down to OSU’s 4, though these numbers don’t include diving (where Ohio State has done well) or the 1650 (where Michigan is typically very strong, but graduated NCAA champ Connor Jaeger last offseason.

All that said, Michigan doesn’t have to do much more than hold even with Ohio State in tonight’s scoring to easily win their 5th-consecutive conference title.

Indiana looks pretty solidly third at this point with 5 up and 6 down. They’d need a huge diving/1650 performance to run down Ohio State, whom they currently trail by 76.

The exciting battle will be for fourth, where Purdue, Wisconsin and Minnesota all finished within 10.5 points of one another last night. Wisconsin, currently in the middle of those three, looks best set up to win the battle, putting 5 up to Purdue’s 4 and Minnesota’s 1. At the same time, though, Purdue and Minnesota should outscore Wisconsin big-time on the platform dive, so this race could come right down to the final relay.

(Note: these numbers do not include platform diving or the 1650 free.)

Just think if all the Buckeyes would have been healthy…?