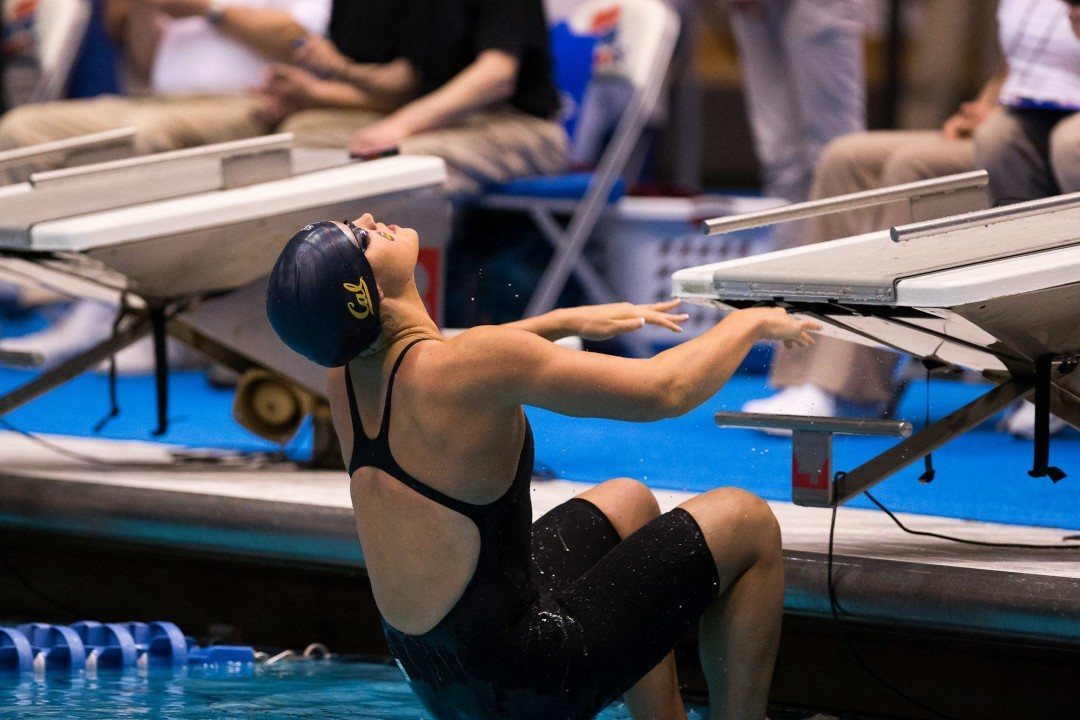 Cal swimmer Liz Pelton will take on the 200 backstroke on the final day of the 2015 Pac-12 Championships. Archive photo via Tim Binning/TheSwimPictures.com

Last night’s battle between Missy Franklin and Simone Manuel was perhaps the race of the meet so far (although Cierra Runge‘s NCAA-record setting 500 free is up there as well), but there should be lots of great storylines to follow all day today as well.  Cal is a team that seems to have very few weaknesses, and as of last night was up 142.5 points over second-place Stanford, according to the official results.  But Stanford has six entries in platform diving, and will be looking to use that event to close the gap.

From the lists in Meet Mobile, it appears that Franklin will swimming the 200 back, where she will square off against fellow Golden Bear Elizabeth Pelton.   Manuel has the top seed in the 100 free.  USC’s Andrea Kropp will be the top seed for the 200 breast, and it will interesting to see if Cal’s Marina Garcia, the second seed, can make the A-final after missing out in the 100 breast yesterday.  The final individual swimming event of the morning, before the 1650 heats begin, will be the 200 fly, where Cal freshman Noemie Thomas has the top seed.  In the 1650, Arizona’s Tjasa Oder comes in as the top seed, but right behind her is Runge.

With Franklin having opted for the 200 back,  Simone Manuel is the clear favorite after posting a time of 47.01, but teammate Lia Neal wasn’t too far behind her with a 47.71.  Two Cal swimmers, Kaylin Bing and Farida Osman, took the next two spots, recording times of 48.18 and 48.27, respectively.  The USC Trojans grabbed two spots in the A-final as well, thanks to Evan Swanson’s 48.45 and Katarzyna Wilk’s 48.54.  Arizona and Utah also each placed a swimmer in the A-final, as Taylor Shick of Arizona and Giluliana Gigliotti of Utah finished tied with a 48.88.

USC’s Andrea Kropp maintained her place as the top seeded swimmer with a time of 2:09.28 to earn her lane four in tonight’s A-final.  Stanford senior Katie Olsen dropped 2.26 seconds off her seed time to swim a time of 2:09.69.  Arizona’s Emma Schoettmer had the third-fastest swim of the morning in 2:10.35, followed by Utah sophomore Stina Colleou‘s 2:10.68.  Unlike the 100 breast yesterday, Cal did get a swimmer into the A-final of the longer breaststroke event today, as Marina Garcia swam a 2:10.97 to take the fifth seed going into tonight.  Stanford has a pair of swimmers take sixth and seventh: Sarah Haase (2:12.35) and Heidi Poppe (2:12.85).  Finally, the ASU Sun Devils got their first A-finalist of the day thanks to Tory Houston‘s 2:13.30.

The Golden Bears set themselves up to sweep the podium in this event tonight, earning the top three seeds from this morning’s swims.  The top qualifier will be Noemie Thomas (1:54.53), followed by Jasmine Mau (1:55.69) and Rachel Bootsma (1:55.84).  Stanford picked up two of the top eight spots, with Janet Hu‘s 1:56.47 earning her the fourth seed, and Lindsey Englel‘s 1:57.75 earning her seventh.  UCLA’s Katie Grover posted the sixth-fastest time of the morning in 1:56.61, and Arizona’s Elizabeth Pepper will round out the A-final after her 1:58.33 this morning.

Simone Manuel would be the favorite even if Missy had decided to swim the 100 free. This is yards not meters. Has Missy ever gone sub 47 from a flat start?

I predict that Simone Manuel will beat Missy in the 200 free at NC2AS.