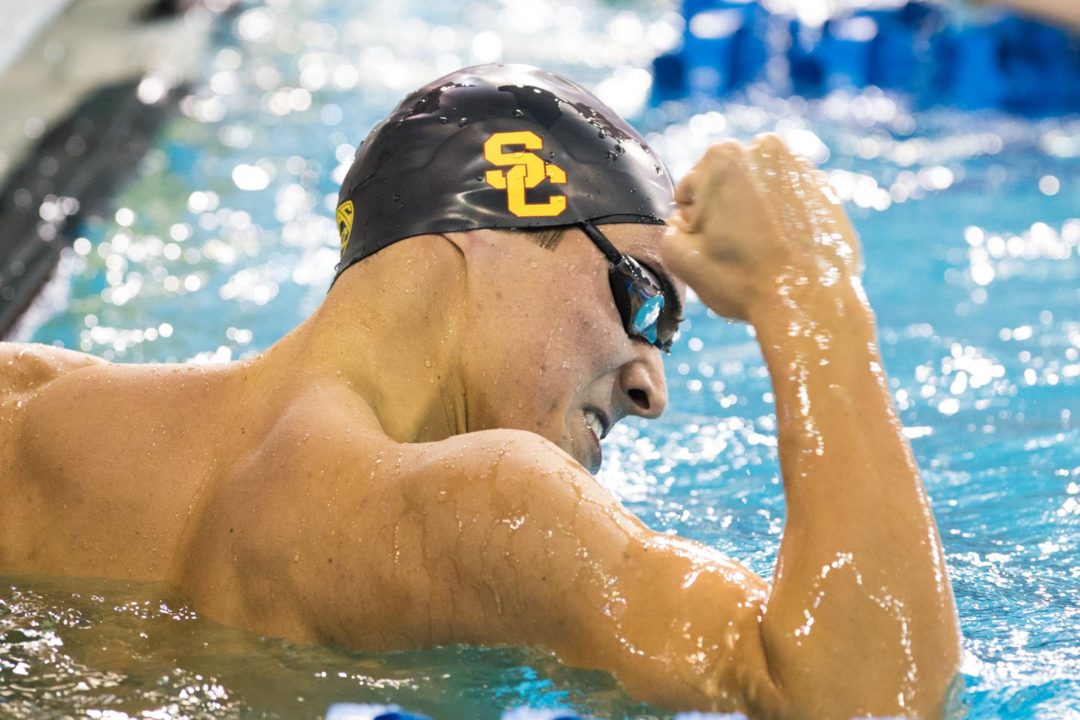 Cristian Quintero won his third event as the Trojans battled their way from second place to their first conference title in 36 years. Archive photo via Tim Binning/TheSwimPictures.com

The final night of the men’s Pac-12 Championships is upon us, with a great three-team race brewing for the team title.

Stanford currently leads the way, and has the top seed in the 200 back with senior star Dave Nolan. But the USC Trojans are pushing hard for the title and coming off an outstanding morning that saw them take the top seed in three different events.

That includes senior Cristian Quintero, who will likely be named Swimmer of the Meet if he can win tonight’s 100 free, which would be his third event win of the week.

A huge morning swim from sophomore Michael Domagala put the USC Trojan atop the 200 fly, and perhaps the biggest upset of the morning was fellow sophomore Steven Stumph taking top billing in the 200 breaststroke over American record-holder Kevin Cordes of Arizona.

Also keep an eye on California, who sit third but could still make a run at the title. The Golden Bears have 2014 NCAA 200 back champ Ryan Murphy leading a talented crew into the final night.

Keep refreshing this page for event-by-event updates from Federal Way, Washington. And follow our live Twitter account, @SwimSwamLive, for the most up-to-date results from all of tonight’s action.

Stanford kicked off their final night on the right foot, getting a 1650 free win from junior Danny Thomson. Thomson went 14:50.19 to win the final heat and take home the win, fighting off tough USC freshman Pawel Furtek, who took second in 14:51.81.

That gives Stanford 6 of the last 7 Pac-12 men’s titles in the event, courtesy of Chad Latourrette, who won from 2009 to 2012, and Drew Cosgarea, who won last year.

Utah’s Bence Kiraly went 15:01.05 for fifth overall, and the next finisher actually came out of the morning heats. Ted Singley of USC went 15:02.37 in the early heats and wound up moving up to 6th overall. Stanford freshman Liam Egan (15:04.71) was 7th, and another afternoon heat swimmer, Arizona’s Nick Hogsed, rounded out the top 8 in 15:07.94.

That leaves Stanford leading USC by just 50 points, and those totals include Platform diving, which has already wrapped up, though it technically comes later on in the event order.

He was only the 4th-best qualifier out of prelims, but defending NCAA champ and NCAA record-holder Ryan Murphy was not going to be denied his Pac-12 title in the 200 back. The sophomore went 1:38.34 to blow away a tough field, breaking the Pac-12 meet record and coming within a second of his own NCAA record set last year.

Murphy beat Stanford senior Dave Nolan, his rival of sorts, in the third meeting of the two. Murphy won two of the three showdowns, but Nolan probably gets bonus points for his American record 200 IM in what was a spirited week-long series between two of the nation’s best all-around swimmers.

A weak event for USC saw Stanford start to increase its lead, now heading the field by 92. Cal also made some headway from third place, moving to within 55 of the Trojans.

But USC regained their momentum in a big way one event later, going 1-2 in the 100 free with four guys in the top 6 finishers. Cristian Quintero led the way and probably wrapped up the Swimmer of the Meet award as the only triple-event winner of the meet so far. His 42.21 just eked out the win over teammate Santo Condorelli‘s 42.27.

Then came the next two Trojans, with Ralf Tribuntsov continuing his stellar freshman campaign with a 42.88 and sophomore Reed Malone going 43.03 for sixth.

Cal’s Tyler Messerschmidt, who won a swim-off just to get into the A final, got 7th in 43.21, moving up past Stanford freshman Sam Perry (43.35). Meanwhile the loser of that swim-off, Stanford’s Tom Stephens, faded to 15th in 43.77, making the swim-off essentially a 15-point swing between the two teams.

USC now sits just 39 points back of Stanford for the lead, and holds top seeds in both of the next two events. With their excellent 100 free finishes, USC is probably also the favorite in the 400 free relay to close the night.

This morning’s breakout performer, Trojan Steven Stumph, was even more impressive at night, proving his swim was far from a fluke. Stumph, a former national high school record-holder who struggled in his freshman season in Southern Cal, won the Pac-12s 200 breast title over two of the most impressive names here, Josh Prenot and Kevin Cordes.

Stumph went 1:52.50, taking another half-second off his best time from prelims. This morning’s swim was a several-second drop already. Stumph went out fast and held off a late charge from Prenot, who went 1:52.61 for second place.

Cordes, the two-time defending NCAA champ and American record-holder, seemed to be lacking his own closing burst, an asset that’s turned him into the best collegiate breaststroker in history. Cordes was second at the 100-mark, but lost track of Stumph and actually got run down by Prenot, finishing in 1:53.55 for third-place.

Cal’s Chuck Katis was 1:54.30 for fourth, bridging the gap between the top few and the rest of the field, who all came in together.

That event gave USC its first lead of the night, a 5-point advantage over Stanford with platform diving already factored in. Cal is still about 100 back of Stanford for second.

It hasn’t been the best of meets overall for Cal, but the Bears salvaged a great finish in the 200 fly, sneaking up to go 1-2 over top-seeded Michael Domagala of USC.

Long Gutierrez led the charge for Cal, going 1:43.23, and teammate Adam Hinshaw was close behind in 1:43.61. Domagala added about a second from his outstanding prelims swim to take third in 1:43.74.

Just a hundredth behind him was Stanford’s top finisher, Gray Umbach (1:43.75), and Arizona first-year Justin Wright went 1:43.85 to close out a tightly-bunched front of the pack.

Stanford’s Tom Kremer was 1:44.10 for sixth with another Arizona freshman, Rasmus Skjaerpe, right behind in 1:45.16. Arizona State also put a rookie into the A heat, with Patrick Park going 1:45.81 for 8th.

The Trojans closed out their first men’s Pac-12 title since 1979 by winning the 400 free relay in 2:49.50. That beat Stanford by just over three seconds to seal the team win by 9 points.

Their closest challengers were Cal, who would have finished just over 2:50, but were DQ’d for a false start on anchor Seth Stubblefield. Sophomore Ryan Murphy had the field’s best split of 41.76 on that relay.

That moved Stanford up to second place in 2:52.63. With Dave Nolan‘s event entries all used, up the fastest split came from Tom Stephens in 42.53, with freshman Sam Perry also putting up a nice leadoff leg of 43.18.

That ultimately left USC atop the points by 9, their first conference title since the 70s. Stanford took second with Cal a distant third.

Does anyone have results for the early 1650 heats?

Danny Thompson wins in a 14:50. Big swim for the Cardinal.