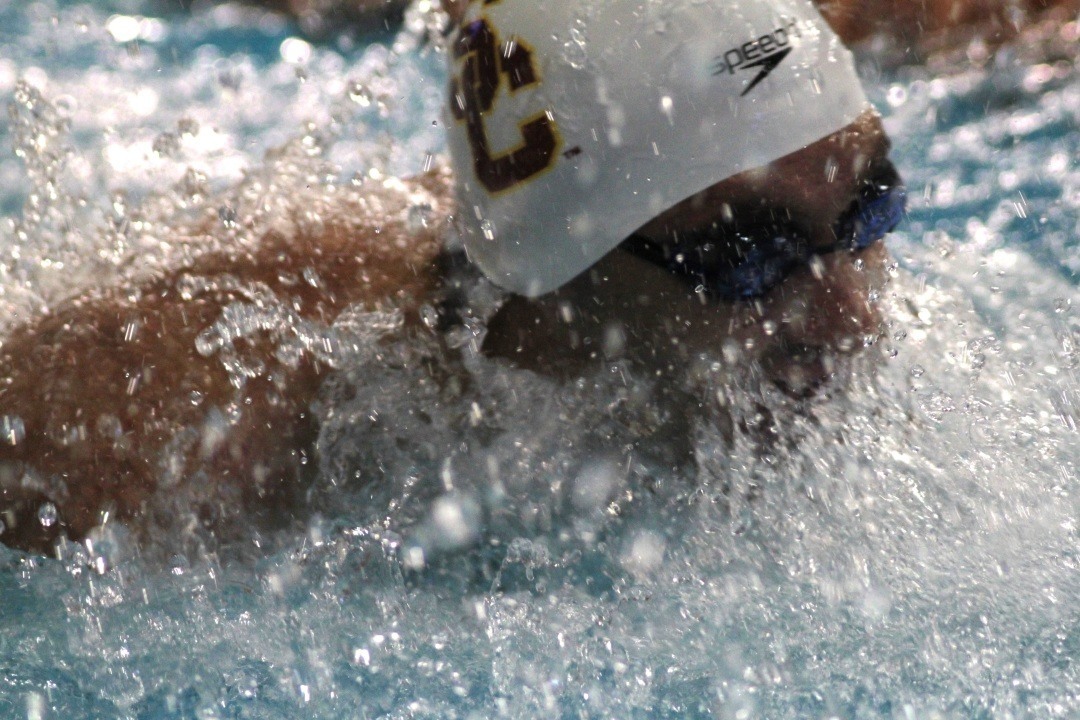 Sophomore Steven Stumph had a breakthrough 200 breaststroke on a huge morning for the USC Trojans. Archive photo via Andy Ringgold/Aringo Photography

Stanford’s David Nolan leads a tough 200 backstroke field as he chases his second win of this week’s meet. Nolan won the 200 IM on day 1 and was right in the hunt in the 100 back last night. His 1:40.57 took top billing in the 200 back Saturday morning, but it’s looking more and more like a solid group of guys could go under 1:40 in tonight’s final.

Stanford freshman Patrick Conaton impressed in this race in a time trial earlier this week, and he followed it up with a big point-scoring swim of 1:40.87 to give Stanford the first and second seeds.

After becoming the first Pac-12 man to three-peat in the 200 and 500 frees last night, USC’s Cristian Quintero is back in search of his third individual win of the 2015 postseason. Quintero went 42.61 to top the 100 free prelims, and after his 41.6 split on the 400 medley relay last night, he looks capable of even more in the final.

The field behind him, though, is incredibly bunched up. In fact, there was a three-way tie out of prelims for the second seed, with USC’s Santo Condorelli and Ralf Tribuntsov both equalling Utah’s Nick Soedel at 42.66, just .05 back of Quintero.

Behind them was another tie, this time for 5th between Cal’s Seth Stubblefield and Sam Perry of Stanford at 42.79. USC sophomore captain Reed Malone was one of only two men not in a tie in the top 9 of this event, going 42.97 for 7th.

Behind him was yet another deadlock, this one requiring a swim-off between Stanford’s Tom Stephens and Cal’s Tyler Messerschmidt for the last championship heat spot. Both men were 43.16.

That should add tremendous drama to the end of the prelims session, as the only thing more exciting that swim-offs are swim-offs between two rival teams still fighting for the conference title. In terms of point values, the winner of the swim-off will be guaranteed 11 points with a shot at earning more, while the loser can only earn a maximum of 9, and that’s if he can hold his position in tonight’s B final.

Swim-off results: Messerschmidt took the swim-off win with a 43.03 and will nab lane 8 for the championship heat. Stephens went 43.18, just off the pace, and will lead the B final.

Finally some breakthrough swimming from Steven Stumph! The former national high school record-holder in the 100 breast struggled as a freshman at USC, not hitting lifetime-bests in either breaststroke race. But after swimming to a personal-best in the 100 breast yesterday, Stumph became the top qualifier in the 200 breast with a 1:53.01 that blows out his previous PR by almost three seconds.

Arizona State’s french junior Thibaut Capitaine went 1:55.69 for sixth, and Cal’s Chuck Katis earned the final A heat lane with a 1:55.89 for 8th.

USC’s huge day continued with the Trojans third top finisher. Sophomore Michael Domagala led the 200 fly in 1:42.75. That’s a drop of 2.3 seconds on a day where coach Dave Salo‘s crew has been shedding seconds in droves.

Domagala has two Stanford Cardinal and two Cal Golden Bears nipping at his heels in the 1:43s. Stanford’s Gray Umbach is second in 1:43.31, and Tom Kremer sits fourth in 1:43.75.

Arizona also put a pair in the the final, with freshman Justin Wright leading the way in 1:44.19 and fellow rookie Rasmus Skjaerpe going 1:44.70. The final championship heat spot went to Arizona State’s Patrick Park at 1:44.77.

The day will continue with platform diving prelims, plus the early heats of the 1650 free, before all those events and the 400 free relay compete in tonight’s finals.

SC starting to position themselves really well to pass the Cardinal. Great 200 breast for them. Cal still a little flat but I agree with Peter Davis that they aren’t showing all their cards yet

Lynch and Hamilton not swimming this weekend is a killer. I’m guessing that’s something like 75 points Cal didn’t score, in addition to the small benefit of pushing USC and Stanford down in the events they scored in.

Have we heard what the deal is yet? Sick? Punishment?

I heard they finally reached total enlightenment in their meditation deCal and no one wanted to be the d*ck who interrupted them, so they just put the Do Not Disturb sign on their room and haven’t seen them in days.

Haha. Both our flying home today because they’re very sick.

Huge morning for USC in the free and breast – they might make a run at it, though Stanford should do really well in the 2 fly. The swimoff between Stephens and Messerschmidt for 8th in the 100 free could also be pivotal.

Amazing drop for Domagala seeded 23rd in the 2FL at 1:49.1 and leads the finalists in 1:42.7. Wonder what his PB was and how much he’ll have left for tonight after that.

Swim-off for 16th in the 2BR between Hoppe and Utah’s Burton 1:58.88. Ugh, I can’t even think about having to race 3 2Breasts in one day. I would just tell them to flip a coin. 🙂 All the USC swimmers in that event with huge drops too.

Liquid – I was once in a swim-off situation with a teammate in the 200 breaststroke for 8th place. We were actually all set to do the swim-off in the hopes that clean water would help both of us improve our NCAA invite times.

Ultimately, someone scratched ahead of us so the point was moot. Probably a good thing, too, because I think the legs would be screaming pretty hard by the third 200 of the day.

They did a swim-off after the morning session and both went faster. They tied again.

They did a swim-off before the evening session and both went faster again. This time there was a winner.

The one who made consies then had to lead off his 800 free relay. His time was…not as good as the previous ones 🙂

Still remains one of the more remarkable sets of results I’ve ever seen.

Think his best was a 1:44-1:45 sometime in the last 2 years. He’s a guy to watch in the next couple years. I believe he was really young, barely 17 when he entered USC, so he may end up a late bloomer…which is scary if he’s already going 1:42!