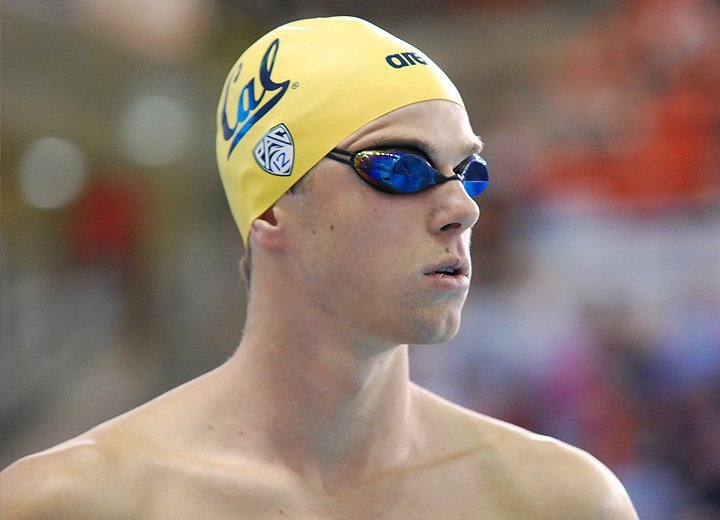 Josh Prenot holds the top seed in the 400 IM in tonight's finals, after breaking the Pac-!2 meet record in prelims with a time of 3:40.84. Current photo via Janna Schulze/SwimSwam.com

Anticipation does not even begin to describe the feeling as we await the start of Day 3 Finals of the 2015 Pac-12 Championships. Major movers and shakers will be taking the stage tonight in an effort to assert their team’s dominance in the overall point standings by the end of the night.

The 400 IM saw Cal junior Josh Prenot break the Pac-12 meet record with his morning swim of 3:40.84, but Stanford freshman Curtis Ogren also fell beneath that same mark and sits as the #2 seed coming into tonight in a 3:41.23.

Cal’s Seth Stubblefield made a statement morning swim, dipping under the 46.0 mark for the first time of his collegiate career.  45.86 was Stubblefield’s result from prelims, but USC’s Ralf Tribuntsov was also under 46.00 (45.92), marking a new school record to boot.  ASU’s Tadas Duskinas will race on the other side of Stubblefield, with his very strong seed-time of 46.10, a new Sun Devil school record.

USC sophomore Reed Malone leads the 200 freestyle, although none of the swimmers this morning cleared the NCAA automatic qualifying mark.  Look for the speed to be taken up a few notches across the board to put things at least in the 1:33-low range.  Cristian Quintero‘s fastest time so far this season is a converted time of 1:32.77, so we will get to see if the USC sprint-distance-basically-anything freestyler can get it done again tonight.

The Trojans went 3 up in the 100 breaststroke, with Andrew Malone, Steven Stumph and Morten Klarskov all representing USC in tonight’s final.  But, lurking in the middle of the pool are the terrible twosome of Chuck Katis (Cal) and Kevin Cordes (Arizona) who finished 1-2 and looked as though they still had plenty left in the tank.

The final individual event will bring us Round 2 of the Dave Nolan vs. Ryan Murphy showdown, with each, as expected, making it to the final in the 100 backstroke.  Top seed belongs to USC’s Ralf Tribuntsov, however, as he is doubling up on his 400 IM and will try to improve upon both of his school record-breaking swims and see if he can claim himself as a double Pac-12 title winner tonight.

Expect wicked results in the 400 medley relay event tonight as well, where Cal holds the top time on the entry lists, but with teams fired up enough, certainly anything can happen to bring out the best swims from even the most unexpected places.

Cal’s Josh Prenot successfully defended his Pac-12 400 IM title tonight, further lowering his own meet record with a sub-3:40 time of 3:38.83.  Prenot’s performance is the 2nd-fastest in the nation by just half a second, behind Georgia’s Chase Kalisz’s 3:38.39 from SEC championships.  Splits for Prenot are as follows (from live results:

Stanford’s Curtis Ogren maintained second place, clocking 3:41.32 in the swim tonight, which added about a tenth from his morning effort but still securing a cool 17 points for the Cardinal.  Ogren’s 3:41.23 from this morning cracked his team’s record in the event, a record which stood since 2002 (Markus Rogan).  Prenot’s teammate, freshman Connor Green dipped under the NCAA automatic qualifying time, finishing in 3rd tonight in a time of 3:42.23.

Cal claimed its second consecutive win on the night with Seth Stubblefield’s massive attack in the 100 fly. Stubblefield charged to the wall in 45.84, dropping .02 from his morning swim and also besting USC’s Santo Condorelli by only one one-hundredth (45.85).  The 1-2 studs now hold the 6th and 7th-fastest times in the nation. For perspective, both Stubblefield’s and Condorelli’s marks would have beaten that of Giles Smith’s Pac-12 winning time of 45.92 and would have placed 7th and 8th, respectively in last year’s NCAA Final.

Third place tonight belonged to USC freshman Ralf Tribuntsov, who added just 4/100 to clock a 45.96 in front of 4th place Tadas Duskinas (ASU) who touched in 46.21 for fourth.  Look for Tribuntsov later tonight in the 100 back A-Final.

USC cleaned up 5th and 8th places in the race tonight as well, with Michael Domagala clocking 46.40 and Dylan Carter touching in 46.80.  Stanford picked up 25 points between 6th and 7th places, with Andrew Liang registering a 46.50 and Connor Black nabbing a 46.70.

It seems as a whole that the field left most of what they had in the pool with their morning swims, as the only athletes to drop time were tonight’s champion, Stubblefield and runner-up Condorelli.

Another 2015 Pac-12 title for Trojan Cristian Quintero, as he wins tonight’s 200 free in a new meet record time of 1:32.40.  He now owns the top two times in the country in the event and was the only swimmer to clear the NCAA “A” cut of the field. Additionally, with his previous 500 free win, Quintero became the first ever Pac-12 swimmer to win both the 200 and 500 freestyle titles in three straight years.  A tremendous feat to accomplish.

Quintero was one of only two swimmers who actually dropped time from prelims to finals.  The other was Cal’s Long Gutierrez who was tonight’s runner up with his 2nd place result of 1:34.01.

The 100 breaststroke final results were that of which most anticipated, with Arizona’s Kevin Cordes successfully defending his Pac-12 title, winning tonight’s race in a cool 52.18.  Cal senior Chuck Katis was again right on Cordes’ heels, nabbing second place in 52.25.  USC’s Andrew Malone remained in 3rd place from prelims to finals, adding about two tenths to wind up with a 52.71 for his efforts.

Promising Cal freshman Connor Hoppe jumped up two spots, improving upon his 6th position from prelims to wind up in 4th place with an improved time of 52.71.  5th place Steven Stumph from USC also improved upon his prelims swim to clock a faster 53.12, as did 6th place Morten Klarskov who touched in 53.19.

Win #3 for the Cal Bears came in the form of Ryan Murphy successfully defending his 100 backstroke Pac-12 title. This time around he registered an incredible 44.98 for 2nd fastest-time in the nation by just a fingernail behind Ralf Tribunstov‘s 44.95 from prelims today.  Thus, Tribunstov and Murphy is the only swimmers to dip under the 45.0-mark so far this year.  At the 2014 Pac-12 Championships it took Murphy a 45.59 to win the title as a freshman.

USC’s Ralf Tribunstov is certainly making his presence known this Pac-12 championships, earning runner-up status tonight, clocking a 45.27 for a time about three tenths slower than his prelims swim.  But, remember he was the guy who doubled up with his earlier 100 butterfly swim, earning 3rd in that contest.

Stanford’s Dave Nolan dropped over a second a half to nab 3rd place and an additional 16 points for the Cardinal, while USC’s Luca Spinazzola finished 4th in 45.50. Cal’s Jacob Pebley dropped down one spot to claim 5th in a time of 46.43, followed by a tie between Ryan Arata (Stanford) and Sven Campbell (Cal) who both registered 47.01 for 6th.  That left Stanford’s Patrick Conaton in 8th place with is time of 47.61.

The USC Trojans put things in hyperdrive for the final event of the evening, as the foursome of Ralf Tribuntsov, Andrew Malone, Santo Condorelli and Cristian Quintero threw down a monster of a 400 medley relay time of 3:04.80.  This marks the first time since 1977 that the Trojans win the 400 medley relay, and they did it in school-record-breaking style.  This season, only Alabama’s squad from the SEC Championships has been faster with their own wicked mark of 3:04.22.  Below are the split break-downs between the two relays:

Some would say the USC win tonight was an upset over Cal, as the Bears are the NCAA-defending champion and retained 3 of 4 of those relay members, save for the graduated Marcin Tarczynski.  Cal’s runner-up time tonight was 3:05.38, shaving about a half of a second off of their previous season best of 3:05.90.  With Murphy nabbing the fastest lead-off split, the difference started to take shape with the back half, as Stubblefield’s 45.49 was about three tenths slower than that of Condorelli and Messerschmidt’s 42.61 anchor just couldn’t hold down Quintero’s fiery 41.69.  Below are the break-downs of their splits as well:

Bad morning for the Utes. Fernandes with the best seed time in the fly fails to make the A final. Kiraly fails to A-final in the 200 Free. In general it seems like the Utah guys are swimming weird today. 400 IM: Prenot’s been on fire this season. Ogren has had a lackluster season for someone as heavily recruited as he was, but it wouldn’t surprise me if he brought out the beast and fought for the win against Prenot. Good event for CAL, good event for Stanford. We’ll see how it goes. 100 fly: Not so much drama in this one, with Cal and USC filling almost the entire A final. Connor Black could possibly step up and challenge,… Read more »

Awesome swim by Josh Prenot!! Excited to see what he has in store for the NCAA’s.

Gutierrez was 1:37 in HS from Utah. I’m not knocking Utah, but that typically isn’t a hot bed for elite swimmers. 1:37 is still a 1:37, but it’s not like he was training at MAC or Bolles, so most probably would have guessed he’d continue to improve. Plus, Cal almost always gets their swimmers, regardless of how elite they were before they got to Cal, to go faster. A lot of programs can brag that so and so dropped this much time, but most programs don’t have pretty much everyone improve–that’s tough.