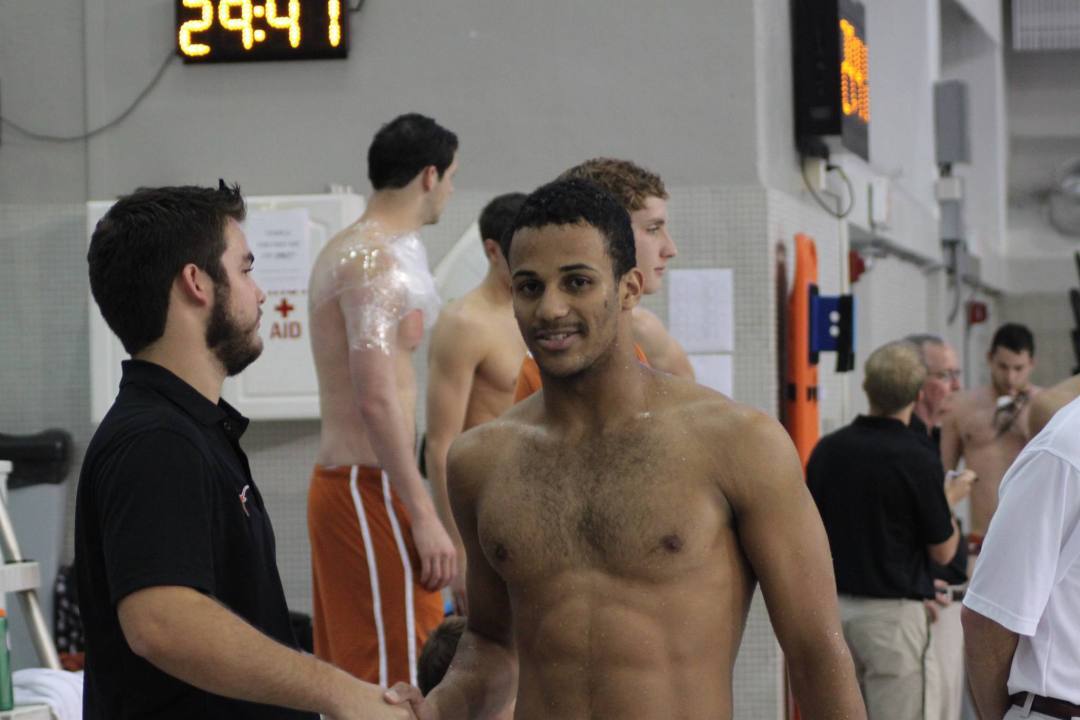 Freshman Brett Ringgold is the top seed in the 100 free, where defending Big 12 champ Tim Squires of West Virginia may prove the toughest test to the ongoing Texas sweep on the men's side. Archive photo via Andy Ringgold / Aringo Photo

Texas sophomore Tasija Karosas has swept the backstroke events this meet, thanks to a 1:52.74, just off an “A” cut.  Kansas sophomore Yulduz Kuchkaro came in second (1:56.16), while Iowa State’s Mariss Engel took third in 1:58.00

Another Texas freshman won this 100 free.  This time, it was Brett Ringgold, whose time of 42.82 was exactly .10 faster year’s winning time, and just under the time it took to get a NCAA invite in this event last year.  In second was last year’s champion in this event, WVU’s Tim Squires, with a time of 43.43.  Two more WVU swimmers, Andrew Marsh (fourth)and Ross Gregg (sixth), were also under 44 seconds, along with Texas swimmers Matt Ellis (third) and Clay Youngquist (fifth).

There were only five swimmers in this year’s Texas freshman class, but three of them have already won their first Big 12 titles.  Jonathan Roberts followed up Ringgold’s victory in the 100 free with his own victory in this event.  Fellow freshman Joseph Schooling’s time in the 100 fly yesterday would have been fast enough to win at any other conference meet in the country.  Roberts swam to a 14:53.33 finish tonight, which is a lifetime best for him and would have been good enough for 16th at last year’s NCAA championships.  Coupled with Austin Temple’s winning 52.71 in the 100 breast last night, Texas could have four freshman score in March.  Texas junior Sam Lewis came in second with a 14:55.39, a time that should get him another NCAA invite this year.

Texas senior Gretchen Jaques led this race from beginning to end, touching in 2:08.94, a solid “B” time, although she already an “A” time with her 100 breast swim from yesterday.  In second was Texas sophomore Madisyn Cox with a 2:11.42.  Third was Iowa State freshman Kasey Roberts with a 2:11.82.

Only a sophomore, Longhorn Will Licon already has three Texas school records, and tonight he rebroke his own school record in this event with his swim of 1:51.77.  After this meet, Licon now holds school records in the 200 breast, 200 IM, and 400 IM.  Coming into this morning, the only time faster than that this season was the 1:51.58 Georgia Bulldog Nic Fink swam at the SEC Championships.  In second place tonight was Texas freshman Austin Temple with a 1:57.15.  Also finishing below the 2:00 mark and NCAA “B” cuts were two WVU swimmers: Max Spencer (1:57.41) and Nate Carr (1:58.87).

The Texas women completed their sweep of tonight’s individual events with senior Kelsey Leneave’s 1:56.21.  Kansas junior Chelsie Miller, coming off a second-place finish in the 1650 earlier in the evening, got another second place finish with her time of 1:58.53.  Rounding out the top three and “B” cuts was WVU’s Julie Ogden, in a time of 1:59.13.

Joseph Schooling joined his fellow freshmen Ringgold and Roberts as an individual champion tonight, following Temple’s win yesterday.  His time of 1:40.59 stands as a Big 12 meet record (Jack Conger‘s time trial Wednesday will not count), second-fastest in school history, and sixth-fastest all-time.  That time also keeps him barely ahead of Michigan’s Dylan Bosch, who swam a 1:40.75 tonight at the Big Ten championships.  In second was junior John Martens.  His 1:43.05 tonight was about a half-second faster than he swam in the time trial Wednesday alongside Conger when he broke the American record in this event, and also was well under last year’s NCAA invite time.  Senior Tripp Cooper completed a 1-2-3 sweep for the Texas men, with a time of 1:45.10.  TCU freshman Matt Spallas came in fourth with a 1:47.73, and WVU’s Chase Williams placed fifth with a 1:47.99.  Both of those times were a “B” cut.

The Texas “A” relay jumped out to an early lead behind individual 100 free winner Rebecca Millard, and never looked back.  The relay of Millard, Tasija Karosas, Mimi Schneider, and Gretchen Jacques finished the relay in 3:17.00.  Kansas took second, followed by Iowa State, West Virginia, and Texas Christian, although the Texas “B” relay had the second-fastest time overall.

With some of the key Texas swimmers not fully rested and unshaven, plus being at the end of a long meet, we weren’t expecting to see any eye-popping times in this relay.  And while the Texas “A” relay’s time of 2:52.14 was about what you’d expect, it is worth noting that Brett Ringgold led off in a new personal best time of 42.60, which should sure up his chances of getting a NCAA invite.  Matt Ellis’s (42.96) and Clay Youngquist‘s (43.03) splits were pretty much in line with their individual times earlier tonight, and Kip Darmody split a 43.55 after swimming the 200 back earlier this session.

As expected, both the Texas men and women cruised to Big 12 championships.

The Texas men had nine different individual champions, including four of their five freshmen (Ringgold, Roberts, Schooling, Temple).  Three other winners were sophomores (Conger, Licon, Smith), suggesting that as strong as this Texas team looks heading into March, it could be even better in a year or two.

is there a video feed of the meet? I cannot find any information on the broadcast on UT or championship website

Tom, I believe the Longhorn Network is planning on showing the meet at a later date, so there is no live stream available.

I suspect that’s right, but I scrolled through LHN listings through Tuesday and didn’t see anything. And there’s no mention of it on either the Texas or Big 12 meet sites.

Looks like Texas is going to have a full squad. If they take 3 divers (Chandler, Bowersox, Anderson, maybe a 4th?), then I think that gives them 16 swim spots. I have 16 guys with times that would have made the meet last year.

I’m counting 17, including Ringgold’s 42.8 tonight. And a couple more who are close to last year’s invited times.

It will be very interesting to see whether Conger swims the 200 back at NCAAs, and if so, whether he has something left in his reserves. My gut feeling is that Conger can drop some time but not a huge amount. I could see him busting out a sub 45 in the 100 back, but would be surprised if he goes in the 1:37 range in 200 back. Hopefully I’m wrong!