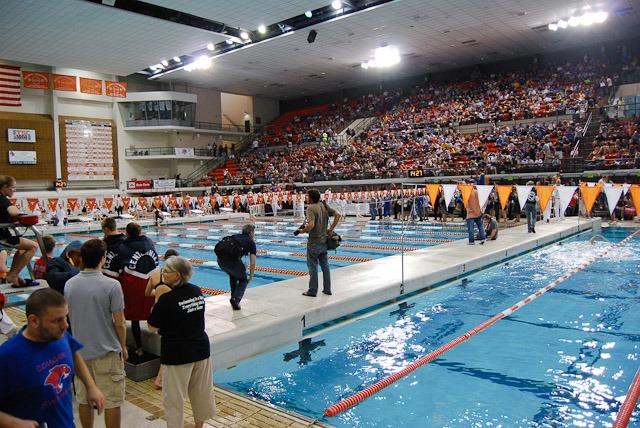 It was a night of ups and downs for the women’s 100 back, as Ann Ochitwa (Denver Swim Academy) – seeded first after prelims – added about a third of a second to take third place with a time of :53.97. Keaton Blovad – a 16-year-old from Tualatin Hills took first with a time of :53.51, followed by Rhyan White (Wasatch Front) with a time of :53.75.

Tualatin Hills also had a victory in the men’s 100 back, with Patrick Mulcare ducking under :48.00 to break his own Western Sectionals record with a :47.39. Reid Elliott was also under the :48 mark, swimming a :47.99 to take second place.

In the women’s 500, Adriana Palomino (Arizona Gold) shaved over four seconds off her prelims time to win with a 4:51.59. Eleana Matheson (Flatiron Athletics) and Shelly Drozda (Front Range) were right behind Palomino in second and third places, respectively.

Tualatin Hills continued their success with the women’s 100 fly, as Sara Metzsch dropped over a second to a finals time of :54.12. Lastly, Metzsch anchored the winning relay swimming a :49.64. She was preceded by Keaton Blovad, Ryan Falk and Emily Cook to take first with a time of 3:22.30.

Check back here tomorrow for a recap of the tonight’s finals!

I believe it is Ann Ochitwa not Achitwa. And the Gassaway twins are Mariah and McKenna not Maria and McKenzie.