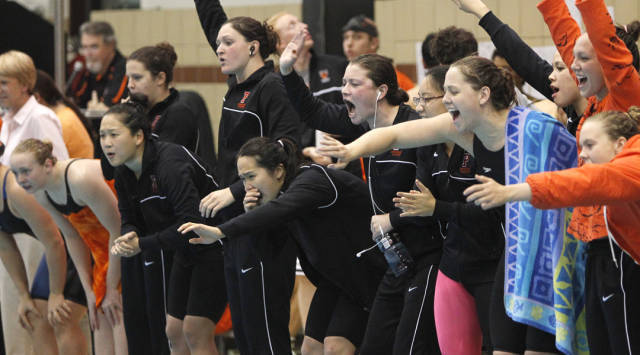 In the tightest Ivy meet in recent memory, Harvard, Yale and Princeton are separated by only 10 points at the top of the leaderboard. All rides on Day Three in Cambridge. Archive photo via Beverly Schaefer/ Princeton Athletics.

Women’s Ivy League swimming has been such that either Princeton or Harvard has been either first or second at the conference championships every year since 1997. And if you go all the way back to 1977, back when the conference meet included Penn State, Pitt, BU and others, there have only been five times in the last 38 years that the pair of giants has not finished in the top two.

There’s a new kid in town, though, doing all they can to make 2015 the year. Okay, Yale is not so new, and the Bulldogs have always had strong performers, but for the first time in a while they have the depth to go with the individual stars, giving them a legitimate shot at the title. And what a freshman class: two of them won Ivy titles on Day Two: Maddy Zimmerman (fly) and Paulina Kaminski (breast), and another, Cailley Silbert, seconded Eva Fabian in the 1000.

All eyes were on Harvard’s Sherry Liu, who upset favorite Fabian in last year’s contest, but swam her own race, unperturbed, and brought the title back to the New Haven corner. Fabian set the pace early on, with Liu and Silbert turning more or less just off her hip for the first half of the race, then shut them all down over the second half of the race. Fabian finished in 9:46.60. Silbert hung with the leaders, pulling even with, and then eventually passing, Liu at the 650. Silbert touched in 9:48.50; Liu went 9:51.94.

The distance freestyle events have been huge point-winners for Yale. After the 1000, the Bulldogs pulled ahead of Princeton by 49 points and were only 22 behind Harvard.

The 2015 Ivy League champion in the 200 IM champion, Harvard freshman Geordie Enoch, scored her second win with a 4:15.22 in the 400 IM. Enoch has a terrific second half. Yale’s Sydney Hirschi and Princeton’s Beverly Nguyen were out front at the end of the backstroke leg, but Enoch and Penn’s Ellie Grimes used strong breaststrokes to catch the leaders. Enoch’s 57-high freestyle shot her past leading Hirschi, who finished second with 4:16.03. Grimes took third with 4:17.91, and Nguyen, swimming out of lane 1, touched fourth with 4:18.44. Fifth was Gina Matsumoto of Brown, then Kristine Ng (Columbia), Mal McKeon (Columbia), and Emma Smith (Yale).

With two “A” finalists, Yale pulled took over from Harvard at the top of the leaderboard and led third-place Princeton by 84 points.

Yale’s Zimmerman repeated her prelims time of 52.90 to win the 100 fly, giving another boost to the Bulldogs’ team score. However, Princeton went 2-4-5-6 and narrowed Yale’s lead to 19.5. Harvard fell back to third, 20.5 points behind the Tigers. The second-place finisher for Princeton was Elizabeth McDonald (53.47), who had won the 50 free on Thursday. Columbia’s Christina Ray was third in 53.64. Princeton’s Morgan Karetnick, Elsa Welshofer, and Nikki Larson followed. Rounding out the final were Kendall Crawford of Harvard and Cornell’s Jenna Immormino.

Princeton freshman Claire McIlmail led wire-to-wire, leaving very little doubt as to who would be crowned Ivy champion in the 200 free. McIlmail improved her seed time by .27 and finished with 1:47.21. Yale’s Zhou was second in 1:48.02, just out-touching Penn’s Virginia Burns (1:48.04) who had been slightly ahead at the 150. Brown’s Kate Dillione was fourth, then came Daniela Johnson (Harvard), Olivia Jameson (Yale), AnnClaire MacArt (Dartmouth), and Victoria Chan (Harvard).

In a close team race, everything can change after one event. Backstroke-heavy Harvard rocketed from third to first after the 100 back, in which they had four “A” finalists including defending champion and meet record-holder Danielle Lee. Lee successfully defended her title with 53.04, just ahead of teammate Kristina Li (53.98). Kendese Nangle of Dartmouth snuck in for third from lane 8 with 54.78, just in front of the Crimson’s Crawford. Fifth through eighth were Taylor Sneed (Penn), Sada Stewart (Princeton), Marissa Cominelli (Harvard), and Heidi VanderWel (Yale).

The most exciting race of the night by a long shot was the 800 free relay. Penn’s Burns shot the Quakers out front on the first leg, with 1:48.11, just off her finals time in the 200 free. Harvard’s Danielle Lee had the Crimson in second; Yale was just behind. Then there was about a two-second gap, and the second swimmers from Brown, Dartmouth, and Princeton all took off together.

At this point Princeton was easily two body-lengths behind the leaders, sitting at best in fourth. The Tigers’ Larson started to gain, 25 by 25, on the field and by the time she touched with a split of 1:47.86, Princeton was even with Penn and just a tad over a second behind Yale and Harvard. Princeton’s third leg was 200-winner McIlmail. Her 1:47.16 split pulled the Tigers past Harvard and even with Yale. Princeton’s anchor Veith took off like a shot and by her first 50 turn was already a second ahead of Yale’s Fabian. Veith split a 1:48.35, and together with Iriondo’s leadoff 1:51.21, Princeton finished with a winning 7:14.58. Yale went 7:15.38 for second; Harvard was 7:15.99.

Heading into Day Three, here are the standings:

Great to see Yale on the rise. Just a quick correction, under Matt Kredich the Brown Womens team won 4 straight conference meet titles from 1996 thru 1999. The Princeton/Harvard reign started in 2000.

In the 60s with Steve Clark, Mike Austin et al and later Don Schollander Yale was a national power and towered over the rest of the Ivy league.