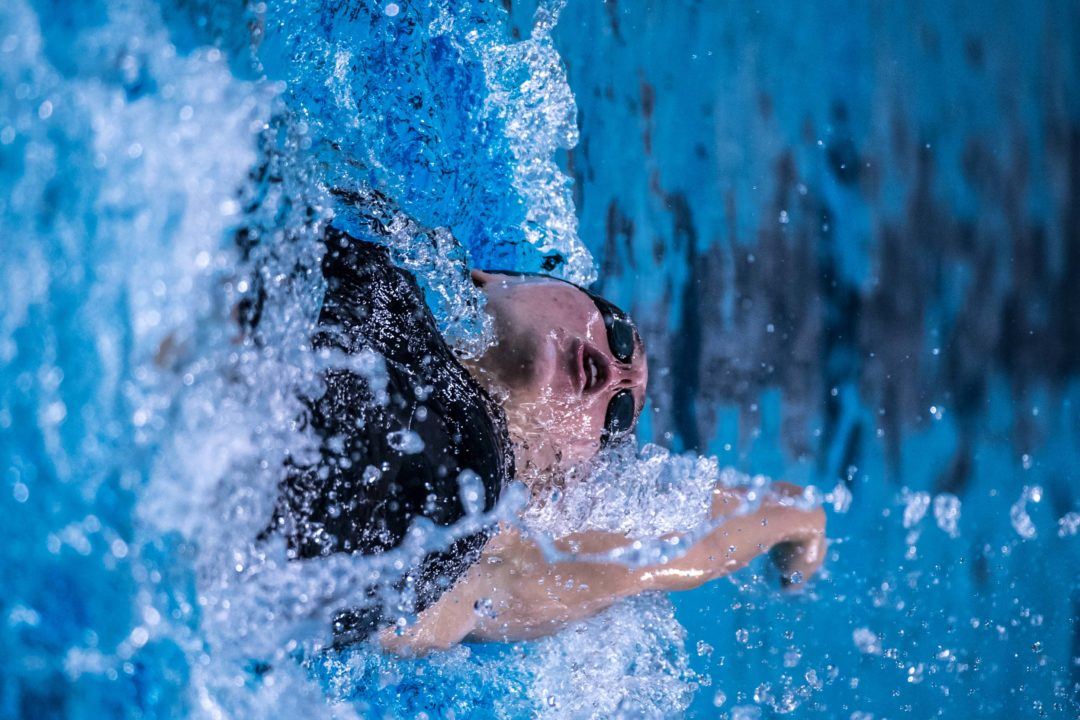 Lucie Nordmann, the 16th-ranked recruit in the high school class of 2018,  has verbally committed to Stanford. Nordmann swims for... Archive photo via Mike Lewis/Ola Vista Photography

Lucie Nordmann, the 16th-ranked recruit in the high school class of 2018,  has verbally committed to Stanford. Nordmann swims for the Magnolia Aquatic Club and the Woodlands High School in the northern suburbs of Houston.

Nordmann, who swims at the club where her dad Michael is the Head Age Group Coach, won the 50 free and 100 backstroke at last year’s Texas 6A (big school) State Championship meet. Her 52.48 in the 100 back set a new State Record and won by more than a second.

In long course, Nordmann was the 2016 Summer Junior National Champion in the 100 and 200 meter backstroke, which came after winning the same two titles in short course at that year’s NCSA Spring Junior Nationals. She swam in the B-Finals of both the 100 back and 200 back at the 2017 World Championship Trials. In the 100, she finished 14th overall, while in the 200, she won the B-Final for 9th place overall (albeit with the 5th-best finals time).

While incredible year-over-year recruiting has left Stanford without many holes, she becomes the favorite to take over the medley relay leadoff next fall when Stanford graduates its three best 100 backstrokers: American Record holder Ally Howe, Janet Hu, and Lindsey Engel. Nordmann willl be in contention for spots on at least all 4 short relays as a freshman.

Also chosing Stanford in this class so far is #2 recruit Taylor Ruck, #3 recruit Zoe Bartel, #9 recruit Allie Raab, #15 recruit Amalie Fackenthal, and Anya Goeders. In that regard, it will be virtually impossible for the Cardinal to be knocked out of the top spot when our annual Class of 2018 team recruiting rankings are released.

Congratulations, Michael. You daughters are great kids and great swimmers. Since Nordmann’s left Woodlands, Woodlands is not competitive anymore at TAGS. See you at 2018 SCY TAGS at Woodlands. Nobody does State Age Group Champs like Woodlands. Great place to watch fastest 14&U in Texas.

Great family, who belong to a great club with great coaches and swimmers. Magnolia Aquatic Club is the real deal

Congratulations Lucie! Welcome to the Farm!

It is amazing how talented and accomplised these young women are to be successful in the pool as well as in the classrooms. Keep it up.

I notice people always bring up ACT scores in these recruiting threads. Has the ACT really surpassed the SAT as the more generally accepted test by colleges?

It’s been awhile since I was involved in this process, but even back in my day, I found most schools seemed more interested in ACT scores outside of the Ivies and some other East Coast schools.

That piece is an inside joke between she and I…

Story should say she’s in the Class of 2018, unless she’s already at Stanford now.

Come on Stanford leave some for everyone else

If this keeps up, they will be leaving an NCAA top 10 team home when the actual meet occurs.

Great pick up, I disagree with her being the top pick for backstroke, Ruck went a 59.23 LC at junior worlds

And the rich get richer.