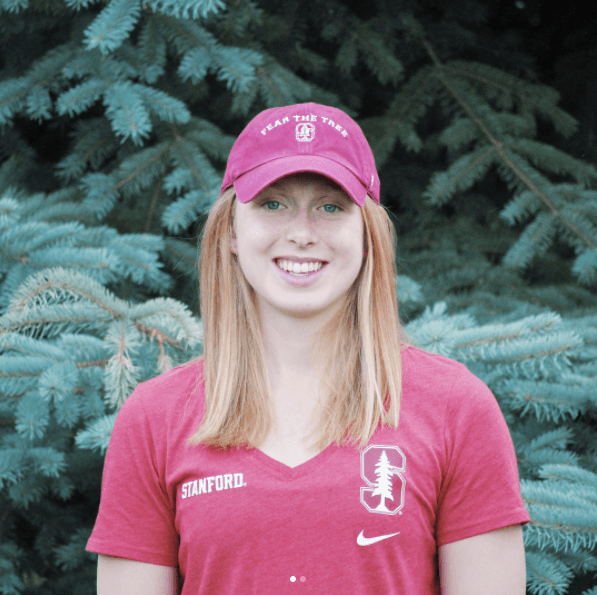 Bartel is the reigning Colorado 5A champion in the 100 breast and 200 IM, among her many accolades. Archive photo via Zoe Bartel

Stanford is compiling an insanely talented class of 2022, and they’ve added Fort Collins Area Swim Team’s Zoe Bartel per her Instagram announcement tonight. Bartel earned gold medals in the 100 and 200 meter breaststroke events at the 2016 Jr Pan Pacs, and she broke Caitlin Leverenz’s 15-16 NAG record in the 200y breast in December of 2016. Last summer, she also made semifinals at Olympic Trials in the 200m breast.

Bartel, along with SwimSwam’s #9 Allie Raab and incoming freshman Grace Zhao, will help turn Stanford into one of the strongest breaststroke epicenters of the NCAA.

After Sarah Haase’s graduation from the Cardinal program, Kim Williams, who was primarily an IM’er in high school, devoted full efforts to her breaststroke this past year as a sophomore. She was their only high-impact breaststroker during the 2016-17 season. Williams, with a personal best of 1:00.05 in the 100, performed above and beyond at NCAA’s, turning in a 58.51 relay split on Stanford‘s national title-earning 400 medley relay and scoring in the 200 breast B final.

Though Williams rose to the challenge this year and helped Stanford plug their breaststroke roster gap, Bartel is going to be a welcome addition in Palo Alto. Her yards bests would’ve been the fastest by any Stanford swimmer in the 2016-17 season as well as any incoming freshman for the Cardinal in 2017-18. Additionally, she would’ve made the 100 breast A final and 200 breast B final at the 2017 NCAA Champs with her lifetime bests.

Bartel is also, intriguingly, a very good backstroker (she’s also a 1:56 in the 200) and a great IM’er. It’s doubtful that Stanford will need any IM talent based on their IM group the next two years, but she does have the potential to swim secondary events if needed.

Can student-athletes combine athletic and financial aid. For example if they were offered 50% for swimming and the school gave them 30% as financial aid, would the student be able to accept both and pay only 20%?

i am not so sure about that….

Sorry, I do not know what the rules are at Stanford. I know student-athletes at other universities who got partial athletic scholarships and partial academic scholarships.

I misunderstood the question. Thought Jackman was asking about academic and athletic money. I need to read more carefully…..

No you have to choose one, trust me.

Not at Stanford. You have to choose one.

All I see in the comments is a bunch of haters. Stanford is able to get great recruits because it’s an amazing school, and an amazing team, and financially it is something that’s apparently available to many top recruits. These girls would be fools to turn down the opportunity.
Also let’s not forget that swimming is overall an affluent sport when talking about financial aid… also swimmers from California (where so many great recruits are from) pay only in state tuition fees for Berkeley. And Stanford awards no academic scholarships (because virtually everyone deserves one).
If people want to talk about unfairness in terms of recruiting, look at the Cal men’s team. They got two world class transfers… Read more »

Ncaa swimming is not a competition it is an exhibition. No womens team other than stanford will win ncaa or pac12 for the next 5 to 8 years. This is going to kill swimming as an ncaa sport. Schools are going to defund or discontinue programs and put their title 9 dollars into womens sports where they actually have a chance to win. Athletes and coaching staff in the pac 12 are extremely demotivated. No one wants to go there
Zero chance to win.

Five years ago, Stanford wasn’t even in the picture. Things will change.

I’m not a Stanford fan, but to say their expected dominance will ruin college swimming is a bit dramatic. There are plenty of reasons to swim in college besides winning an NCAA team title. Standford won the national title easily this year, but it was still a great meet with plenty of exciting and fast swimming.

Zoe would’ve been a great addition to the Texas A&M Aggies. Steve Bultman has an incredible program there… especially breast and IM!

Why a breastroker wouldn’t go to Indiana is beyond me. They have it figured out. Lily King won’t be around for ever.

Stanford is a much better school academically than Indiana is

Tell that to James Watson (Nobel prize for the DNA triple helix), Mark Cuban, and hundreds of other extraordinarily successful IU alumni. Stanford is a nice pedigree, but it doesn’t guarantee success. If you look at the Stanford women’s swimming Hall of Fame, the members aren’t exactly current doctors, lawyers, and Indian chiefs, as the saying goes.

So true. From where you graduate is so much less important than what you do with the degree. To your point, the Stanford women’s swimming hall of famers are Summer Sanders (B list celebrity), Misty Hyman (former assistant coach at ASU), Tara Kirk (contributor for Episode 18, Season 6 of What Not to Wear), Jenny Thompson (doctor), Lea Loveless (swim coach, now volunteer coach). With the exception of Thompson, a private practice doc, that’s not exactly getting much bang from the academic elite.

I take issue with your whole argument, but hopefully there will be a more appropriate place to debate post-college/swimming career choices at some point. I just especially need to point out that Tara Kirk Sell has a PhD and is an Assistant Professor in the Department of Environmental Health and Engineering at Johns Hopkins. You don’t have to look too far to find really incredible, inspiring graduates of both the men’s and women’s teams.

Nor do you from IU and virtually every other D1 swimming program. The point Bigly is making, with which I agree, is that the institution’s address doesn’t necessarily predict future success, particularly with overachieving swimmers.

GREAT response to Bigly’s limited knowledge of (or snooty spin on) Tara’s situation! P.S. I heard that Mark Cuban is a horrible bowler! So, there you go . . . . QED

Bigly – kind of silly to just assume that Hyman, Kirk, and Loveless have only done what you mention and nothing else. And how many shows has Summer Sanders hosted? She has worked hard and did pretty well for herself which isn’t just being a celebrity.

I think his point was more that it didn’t take a Stanford degree to become a show host (or whatever Summer is doing) or swim coach. He responded to the initial knock that anyone should pick Stanford because it’s better academically. True, on average, and for some.

Wasn’t my point. There are many, many assistant professors who run through the Hopkins mill, have a PhD, or an MD that did not graduate from Stanford, but from a public university. None of these women achieved whatever they achieved just because they went to Stanford. The point is that there are plenty of D1 public schools that produce graduates that accomplish everything Stanford grads do. To dismiss IU, in this case, as a good choice for a breastroker when they have a male and female Olympic gold medalist in the stroke, because it’s “academically inferior” is just moronic and elitist.

I understand your point but it looks to me like you provided examples of female Stanford swimmers without having any idea if they have achieved anything or not. You just the mention a random job that they had.

I think that James Watson, Mark Cuban and “hundreds of other[s]” already know that Stanford is universally recognized as being ranked as a better academic institution than IU. Noting that Stanford ranks higher is NOT intended to imply that only losers go to IU or that anyone who goes to IU has no chance at succeeding in their chosen field of endeavor. Likewise, the writer also didn’t assert (your strawman notwithstanding) that getting a degree from Stanford guarantees rainbows and unicorns for the rest of your life. However, all else being equal, I’d rather start my adult life with a Stanford diploma than an IU diploma.

I think the comments on this article should be focused on a congrats to a very talented young lady and not focus on the financial/coaching/political issues related to California schools. I’m sure that SwimSwam can run a separate article on that issue and then everyone can comment away.

Congratulations Zoe! It was a pleasure meeting you in Indy. You will accomplish great feats!

I think it’s ok to have both congratulations and overall team speculation posts in these articles, especially when it comes to a top level recruit. People who don’t know Zoe are going to want to speculate on the overall outlook of the team when they land a recruit of her caliber.

I have to echo the sentiments of Swim Mom. For goodness sake, take your gripes about Stanford, Cal and any other school elsewhere. Give this young lady her congrats for a well earned opportunity and move on.

Congrats on your tremendous accomplishments Zoe!!

I agree we should be congratulating Bartel, but it is also appropriate to speculate/ make predictions about Stanford and other NCAA swim teams. Bartel is an elite recruit going to an elite program- this kind of discussion surrounding her commitment comes with the territory. As long as no one here trashed Bartel personally (so far no one has) there is nothing wrong with discussing the swim programs at Stanford, Cal, A&M, etc.

I think it’s funny that Cal is getting trashed here. Stanford is currently better but did I miss where Cal women got bad? Do you guys really look at that roster and think they are a bad roster and can’t recruit.