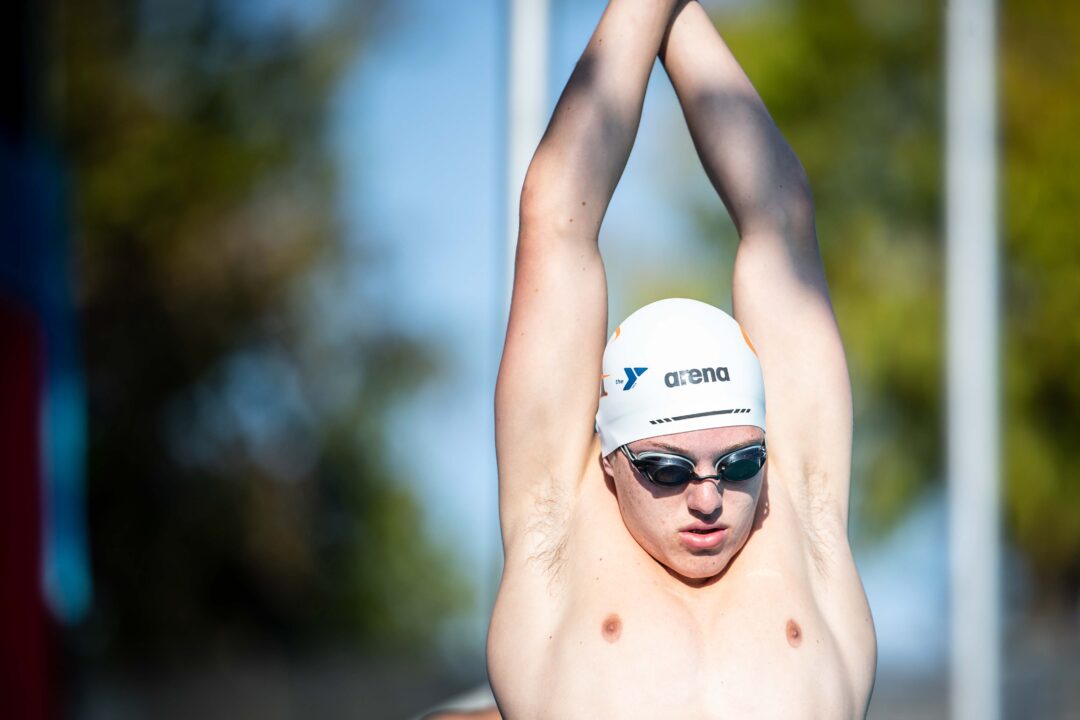 At just 15, Thomas Heilman now joins Michael Phelps as one of the only two US men to have gone sub-52 in the 100 fly before turning 19. Archive photo via Jack Spitser/Spitser Photography

15 year-old Thomas Heilman continued his NAG record onslaught, taking down the US 15-16 National Age Group record and the Junior Pan Pacific meet record with an eyepopping 51.98 in the 100 fly today in Hawaii.

Heilman came into today with a lifetime best of 52.44 that’s just a few weeks old — he hit that time at the Speedo Junior National Championships earlier this month.

Heilman still has another year in the 15-16 age group, and at his current rate of improvement, it’s not unreasonable to suggest he could close in on Michael Phelps’ 17-18 NAG of 51.10 before he even ages into that age group.

So far, we could only come up one swimmer worldwide who’s been faster than Heilman at a younger age, and that’s Andrei Minakov. He clocked a 51.84 at 2017 Junior Worlds when he was about four months past his 15th birthday. Heilman turned 15 this past winter, so that appears to put him a bit older than Minakov was when he got under 52. Minakov is registered with USA Swimming, but growing up he split his time between Russian and the USA, and he represents Russia internationally.

Tonight’s 100 fly win by Heilman also eliminated one of the oldest Junior Pan Pacific records still on the books, a 52.37 from New Zealand’s Daniel Bell back in 2009.

How has Minakov disappeared exactly?

Hopefully from all international events

It’s crazy how Heilman could realistically challenge Milak’s WJR’s within the next 12 months.

Why do you say that, what PFA said is completely factual.

Maybe in a few years’ time, but he is pretty big for his age and already elite at his start and underwaters, so large drops will likely be harder to come by.

Wait so, is Minakov actually a U.S. citizen?

According to a commentor in the live results thread, Zhuhao also went sub 52 at 15 but uncertain how if he was older or younger at the time compared to Heilman months wise.

Also I think Heilman turned 15 in January or February. December was when he went on his tear as a 14 YO

Thanks on both points. From a quick glance, it looks like Li Zhuhao was about 15 and 8 months, so it’s close.

What the hell dude