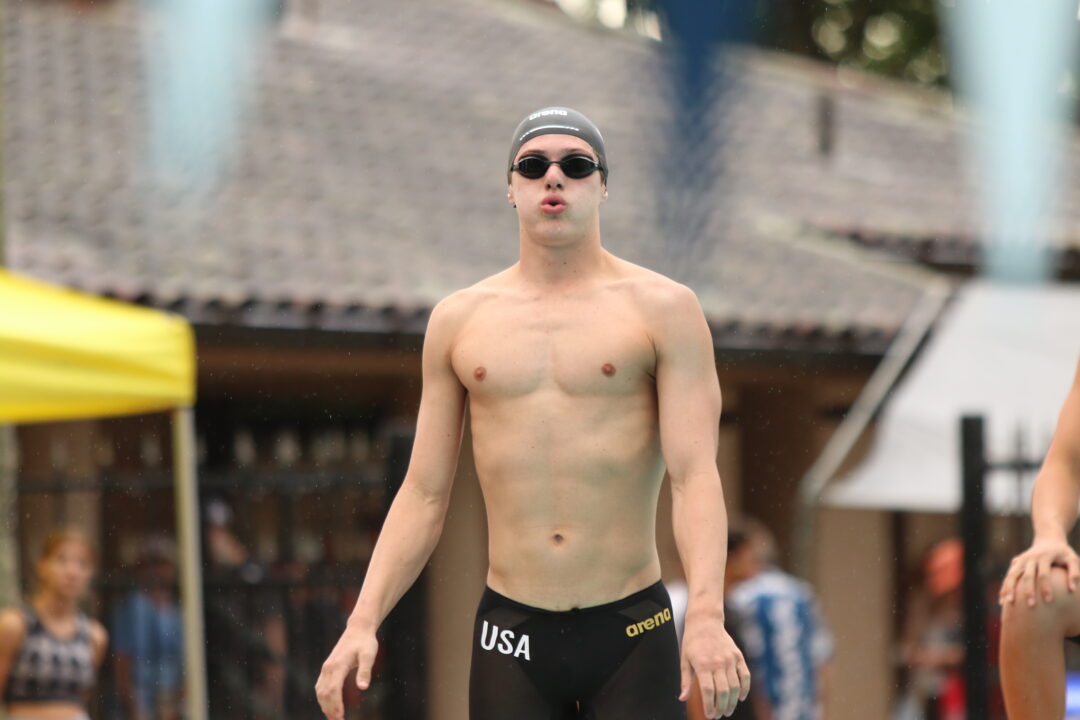 After earning silver medals in the 200 fly and 100 free, USA's Thomas Heilman is looking to score his first individual gold in the 100 fly on Friday night. Current photo via Jon Reiter

With half of the meet already in the books, the United States leads the medals table with 10 gold, 9 silver, and 4 bronze medals. Australia and Japan have 13 medals each. Australia ranks second behind USA with 4 golds, 6 silver, and 3 bronze; Japan has 3 golds, 3 silver, and 7 bronze.

Day 3 finals will crown the winners of the 400 free, 100 fly, 200 back, and 4×100 free. Erin Gemmell of USA is top seed in the 400 free and is poised to sweep her events; she won the 200 free on Wednesday and the 100 free on Thursday, both in meet record time. Australia’s Joshua Staples is looking to add gold in the 400 free to his 1500 victory from Day 1 but USA’s Alec Enyeart posted the top time in heats this morning.

USA’s Alex Shackell had the fastest qualifying time in the girls’ 100 fly by three-quarters of a second, while Australia’s Jesse Coleman topped the boys’ 100 fly qualifiers by a more modest margin over USA’s Thomas Heilman.

Japan’s Yuzuki Mizuno and Mio Narita earned the middle lanes in the girls’ 200 back final. Their teammate Hidekazu Takehara led the qualifiers for the boys’ 200 back.

If swimming were a board game, the girls’ 400 free final would have been a chess match. Erin Gemmell took off like a shot from the outset, as she had in morning heats, trying to get into clear water. She flipped at the 50 wall a body length ahead of the field. The next 50 meters, though, belonged to the Australians. Amelia Weber took over the lead from an outside lane; her teammate Jamie Perkins flipped just behind Gemmell. Weber was still out front at the 150 and Perkins had moved into second place, .17 ahead of Gemmell.

Gemmell now ranks 6th in the all-time rankings for American 17-18 girls behind only Katie Ledecky, Katie Hoff, Janet Evans, Cierra Runge, and Allison Schmitt. Cox moves into the top-10. Gemmell and Cox will presumably be training partners at the University of Texas when they begin in the fall of 2024.

The boys put on quite a show in the final of the 400 free, rivaling the girls’ race in excitement. USA’s Rex Maurer and Alec Enyeart went out aggressively on the first 50, flipping within .01 of each other with 26.1s. Canada’s Adam Wu was a few tenths behind them in third. Enyeart took over the lead at the 100 and Australia’s Joshua Staples moved into third.

Staples, who won the 1500 free on Wednesday night, passed Maurer and remained in second place behind Enyeart at the 150 and 200 walls. Staples then began his descent, taking over the lead at the 250 and never letting up. He continued to distance himself from the two Americans who were battling for second place in his wake.

Enyeart and Maurer were tied at the 250 turn, after which Maurer powered ahead of his teammate. He came to the wall 1.5 seconds behind Staples and 1.2 seconds ahead of Enyeart.

Alex Shackell of USA was the number one seed coming into the meet. She led the qualifiers in heats this morning. And she won the final in 58.58 to remain atop the field in the girls’ 100 fly.

Shackell established an early lead, turning first with 27.30 at the halfway point. Her second 50 was a tick slower than it had been in prelims but her quick first 50 allowed her to fend off a strong charge from Japan’s Airi Mitsui over the second half of the race. In fifth place at the 50, Mitsui had by far the fastest back half. She came home in 30.6 to come within .09 of running down Shackell.

Mitsui stopped the clock at 58.67 to earn the silver medal.

USA’s Bailey Hartman, third at the 50 behind Shackell and Canada’s Ella Jansen, was the second-fastest closer, coming home in 31.0 to take third place with 58.71.

Australia’s Jesse Coleman, the fastest qualifier this morning, was first to the 50 with 24.57. USA’s Thomas Heilman and Aaron Shackell followed, trailing by .16 and .5, respectively.

Heilman accelerated his pace on the second 50. He and Coleman swam together for the first 35 meters but Heilman pulled away over the last 15 meters and outsplit Coleman 27.25 to 27.66. Heilman got his hand to the wall at 51.98, beating Coleman by .25. Both Heilman and Coleman (52.23) broke the meet record set by Daniel Bell of New Zealand in 2009.

Tomoyuki Matsushita came home .4 faster than Shackell and just got by the American at the end to pick up another medal for Japan. He finished in 53.38 to Shackell’s 53.54.

Yuzuki Mizuno and Mio Narita of Japan led the field at the first turn with 30.04 and 30.45, respectively. Canada’s Regan Rathwell led the next group, followed closely by USA’s Maggie Wanezek and Kennedy Noble.

Mizuno remained out front on the second 50, while Narita crashed into the lane line with about 15 meters to go, which threw her momentarily off course. Rathwell slipped by Narita and flipped in second place at the 100 wall. Narita regained her composure and outsplit Rathwell by a full second on the third 50.

Mizuno led the field by a full body length headed into the final 50 meters. Narita was back in second pace and USA’s Wanezek had taken over at third place. Her teammate Noble had a tremendous fourth 50, though, and would up getting her hand to the wall just after Narita.

It was a three-man race in the middle lanes of the pool, as Japan’s Hidekazu Takehara and USA’s Keaton Jones and Josh Zuchowski battled for the 200 back title. Takehara was quick to establish the lead; he split 27.66/29.4 to flip at 57.13 at the halfway point.

Australia’s Olivia Wunsch, Hannah Casey, Jamie Perkins, Milla Jansen also lowered the meet mark with 3:39.04. Wunsch put the Aussies in front on the opening leg with her 54.68 leadoff. She was followed by Casey (55.39), Perkins (55.01), and Jansen (53.96). Jansen’s anchor was the fastest split of the night but it wasn’t quite enough to catch the Americans.

Looks like we can take as given there are a number of young women & men at this meet who will be on the 2024 US Olympic team. Ditto that for the young Aussies.

These performances are inspiring.

Shouldn’t these kids be in Lima?

Honestly, I have the same question. Why not sure cancel jr Pan pacs like sr pan pacs and have all the juniors swim at the same meet.

With all of the back-and-forth with Russia hosting, not hosting, moving the meet, moving the dates…my sense is that USA Swimming primarily (and to some extent the rest of the nations) just wanted a meet they could control and have some certainty over scheduling and organization. So rather than sitting in limbo, they just threw this one together.

Looks like a quite a few of the Aussie JPPs team (plus some others) will be going to US Open in November.

Whats your US Open like? Have someone going from Aus.

Also am curious about this since I don’t have a full grasp regarding this but because this relay is made up of USA swimmers would it be ratified as a new 15-18 NAG record? Or is that only USA swimming club teams?

Serious question: Did you know the time for the 5th place relay at 2007 worlds off the top of your head?

Or did you go and research it specifically to throw shade at a race from 15 years ago?

Not sure which is more embarrassing tbh.

Knew they had a shot at the record when winkler flipped at 2:50.0 and they got it by .01 great swimming all around and they are all under 18.

Quite a young relay to have set the wjr. 15 YO, 2 16 YO, and a 17 YO. If Heilman, Diehl, Winkler keep swimming junior meets for the next couple of years they could destroy that record.

McFadden turned 17 in the span between Jr Nats and now, so almost 2 16YOs!

Ah did not know that, they could really blast it next year on the junior scene.

what are the splits?

My estimates calculating on the run

What happened to Olivia? Didn’t she swim a 52 split a few days ago?

That was Casey and it was a timing error.