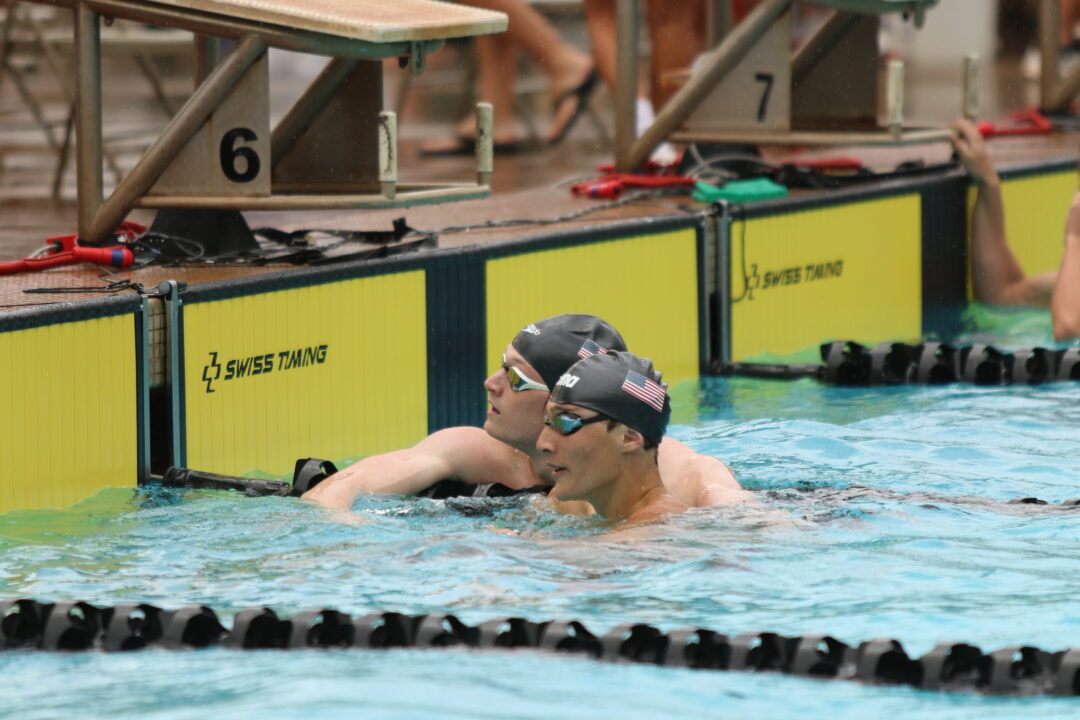 100 backstroke champion Daniel Diehl came up huge for the team, splitting 48.66 on the 3rd leg, then Kaii Winkler anchored in 48.95. Current photo via Jon Reiter

The U.S. boys 4×100 free relay team of Thomas Heilman, Henry McFadden, Daniel Diehl, and Kaii Winkler tore to victory tonight at the 2022 Junior Pan Pacs, breaking the World Junior Record in the process. We’ve seen a ton of Championship Records go down through the first 3 days of this meet, but this performance marks the first WJR to be broken this week.

Here is a splits comparison between the old World Junior Record from 2019 and the U.S. team’s performance tonight.

Comparing the U.S. team tonight to the previous WJR squad, Heilman’s lead-off made a huge difference, coming in 0.37 seconds faster than Jake Magahey was on the 2019 team’s lead-off. Notably, Heilman’s swim came after he broke the Championship Record in the boys 100 fly final earlier in the session, setting a new U.S. 15-16 National Age Group Record (51.98) in the process.

Old record swimmers turned out to be pretty successful! Hope these four can meet or surpass them.

Awesome Relay! Congrats to those boys and the coaching staff who put it together..

Very impressive, but I can’t get over the fact that a competition of this caliber is hosted in a venue that is utter shit

What’s wrong with the pool? The water’s wet ain’t it?

water isn’t wet but i get what u mean

I think the kids are likely willing to trade starting wedges for a week in Hawaii, lol. It’s also likely there aren’t too many 50 meter pools in Hawaii. I will admit they could have spent a couple hours powerwashing the blocks and deck before the meet.

please do not comment on the pool in Lima

Lima’s pool is pretty tho

The us machine of generating talent year in and year out is enviable.