Picks: The King and Queen of the 100 Fly Will Reign at Trials 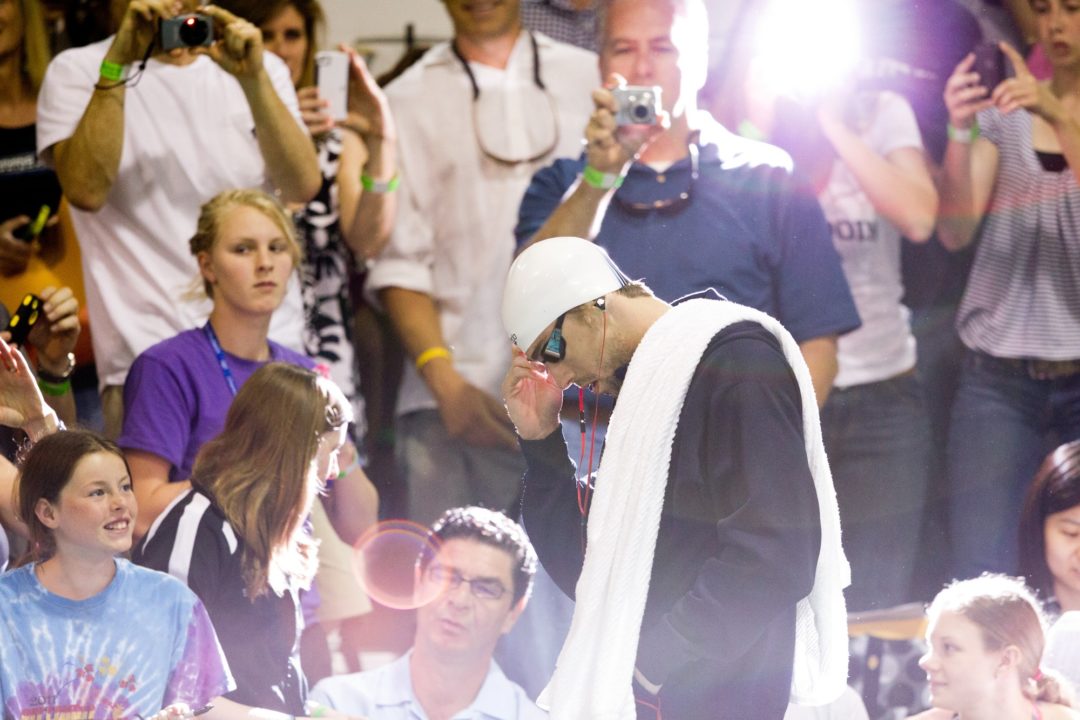 Michael Phelps is the man in the 100 fly for the Americans, and the true anchor of he medley relay. (Photo Courtesy: ©Tim Binning/TheSwimPictures.com)

Up next is the 100 fly, where both the men’s and the women’s side has one standout superstar in the defending World Champion. But on both sides, the race for the other Olympic spot gets very interesting – and there’s a good chance that we could see some shakeup from last year’s World Championships Team.

With two World Championship medalists in the pool, it would be easy to call this men’s 100 fly a slam dunk. Michael Phelps is clearly a favorite in the race, as he’s won every 100 fly that mattered since the 2006 Pan Pac Championships. He showed the last two years that he can swim a 50-point in a jammer and in less-than-ideal shape, which means he can swim a 50-point at Trials without a full taper.

But despite those two being so good and being the “assumed” favorites, there’s a slew of young talent who are looking to pick them off, and if these young swimmers have their way, it’s going to take a 51 to even final. Where the two aforementioned swimmers could be vulnerable is on the front-half of the race. Neither Phelps nor McGill goes out particularly hard in this race relative to their finishing times, and anyone who really attacks the first 50 could at least put some upset-pressure on the competition.

In that group will be first-and-foremost Tim Phillips. The Ohio State Buckeye is taking a year off from college swimming to train with SwimMAC, and he is thriving there. He went a 51.6 at Summer Nationals last year, and has been consistently putting up 52’s in-season this year at the Grands Prix. He’s got a pair of probable A-finalist teammates in Eugene Godsoe and Davis Tarwater, the latter of whom has also been fantastic after taking a hiatus from serious training in 2009 and 2010.

Giles Smith was ‘the next big thing’ coming out of high school, and after transferring to Arizona, he now seems to be fulfilling that potential. Lost in the excitement of Tom Shields’ NCAA victory was Smith’s runner-up swim in 45.77 – and a bit faster even in prelims. And then there’s Shields himself, the NCAA Champion with the amazing walls who wow’ed the swimming world in yards, and was under 53 at a non-tapered in-season meet in Mission Viejo a few weeks ago.

Those two are sort of opposites. Shields is a short-course guy who’s finding his way in long course, whereas Smith has always been better in long course than short course. The two were about even last year, so this race-within-a-race could come down to which has gotten faster since then, and I think that on the basis of that question, the answer would surprise a lot of people as being Smith favored to place higher. But there’s a ton of factors that complicate that comparison.

Former Michigan Wolverine Chris Brady, who is Michael Phelps’ primary training partner, is still a young guy – he’ll only be 23 when he arrives in Omaha – who seems like an old-pro. He was 5th at Trials in 2008, which puts him behind only Phelps and McGill among swimmers who are still active. Since moving to North Baltimore, he’s really returned to elite status, including a 52.50 at last year’s Summer Nationals.

After that, it gets pretty thin. Bobby Bollier finaled in 2008, but has moved way toward the 200 fly at this point of his career. Dan Madwed is similar, but of the two he is the better 100 butterflier. Mark Dylla is another 200 meter specialist who could be good for a semi-final in this race too.

There are a few names in this field that are going to surprise a lot of people as finals contenders. Take, for instance, former UNLV swimmer David Seiler,  He’ll be a top-12 seed in the 100 fly with a 53.03, but hasn’t ever been better than a 47.0 in yards in textile (including his last two years of college). That’s a big disparity in relative times. Minnesota swimmer Kyler Van Swol has been a 53.0 in long course, but only a 46.95 in yards.

High Schoolers Maclin Davis, who recently crushed the National High School Record in this event in yards, and Jack Conger (if he chooses to swim it) have also been swimming very well. This is Davis’ only trials qualification thus far, so he’ll be 100% focused on one event. We have to remember too that David Nolan is as good in the 100 fly as he is in the 100 back in long course, though he’d have to fight off a quick back-to-back at trials to get through the 100 fly semi’s (they come one event after the 200 IM final, if he makes that).

The big question-mark is Ian Crocker, who has not raced since the 2008 Olympics. He’s back in the USADA drug testing pool, implying a comeback, but he’s denied that multiple times in the last few months. We’ll have to take him at his word for now. There’s also a slim chance that Ryan Lochte will swim this race – he foreshadowed some unique events in a press conference before the Charlotte Grand Prix where he said that he might swim some different things at trials.

I’m going to pick an upset here – I think that Tim Phillips knocks off McGill for the second spot. It’s shocking how similar Phillips is to Tyler McGill circa 2010, but just a year behind. McGill at the 2010 Pan Pacs swam a 51.69. At 2011 Nationals, Phillips swam a 51.69. McGill is 5’11 and Phillips is 5’11, so neither is very tall. But Phillips is younger, and with his first full season of training in long course exclusively, it would seem that he had the bigger jump to make. It could be a great battle, but I’ll take Phillips.

Dana Vollmer is the world’s next superstar in swimming. She’s the defending World Champion in the 100 fly, breaking the American Record, and has catapulted off of that into a great 2012 season – including 57.2’s at a pair of Grand Prix meets. She should etch her name in the annals of history in London, beginning with her best event – this 100 fly – and could even go after a World Record.

After that, things get very interesting. Upsets are the name-of-the-game in this 100 fly. In 2004, only one of the two Americans from the previous year’s World Championships made the Olympic Team; in 2008, neither did. So for this second spot, history says that we can’t be too hung up on who made the team in 2011.

Claire Donahue is the “underdog” if there were one, coming from mid-major Western Kentucky. But that “underdog” status didn’t keep her from placing 2nd (behind only Vollmer) at last year’s Summer Nationals in 58.05 – making her the second-fastest American in 2011. She tied for that honor with the great Natalie Coughlin, who has said she was considering swimming this event at the Olympic Trials – especially with the new Olympic schedule making the same-day double with the 100 back final slightly easier (the 100 fly semi’s are at the end of the session, 100 back finals at the beginning).

Christine Magnuson, of course, is the other swimmer who joined Dana Vollmer at the World Championships in this event. She failed to match the 57.3 that got her there, however, and was knocked out in the semi-finals. She’s since put a lot of effort into improving her 50 freestyle, and meanwhile she’s had some solid 100 flys (58.8 in Missouri was good, a 1:00.01 in Indy was less impressive).

Magnuson is characteristic of a lot of the field, that leaves a lot of mystery for trials, in that she hit a plateau in 2010 – among the top 11 seeds headed into Olympic Trials, 6 were faster in 2010 than they were in 2011. That includes Kathleen Hersey, who has looked very good the last month or so (I think she’s a near-lock in the 200, but we’ll get to that later on). Felicia Lee was a 58.4 the summer before she began college swimming, but was only a 59.5 at last summer’s National Championships.

Lindsay DePaul, Kelly Naze, and Kim Vandenberg (now back training in the US) are all in the same boat.

Former Yale All-American Alexandra Forrester, on the other hand, was great last year. After taking a bit of a hiatus in the summer of 2010 (she only swam a couple of local long course meets all year), she regained her fire these past 12-months; this showed in both long course (she was 2nd at Winter Nationals behind only Vollmer) and short course, where she was 6th at NCAA’s. Elaine Breeden has been hot too, going under 59 consistently in the last year. She’s usually had a pretty-decent taper too, so don’t be surprised to see her in the 57’s at trials if she’s fully focused, looking for a second-straight Olympic Team.

Auburn sophomore Olivia Scott had an outstanding college season, and finished 2nd at NCAA’s this year. She’s made a huge jump last summer in long course, where she dropped a second-and-a-half at Nationals. She’s the best darkhorse pick in this race, if she continues that rapid clip of improvement.

Make your own picks!  Enter the SwimSwam US Trials Pick ‘Em Contest.  You could win sweet prizes from Engine or your very own SwimSwam Swag.  Click here!

How come no predictions for 200 fly?

What about austin staab everyone is forgetting about him, he has amazing potential

Yes but here we discuss about swimming in long course, not in a bathtub.

Tarwater looked awfully good at Ultraswim – and there is a lot to be said for the motivation of being third in ’08…. my money is on Davis

I also have doubts about Tim Philips beating Tyler McGill. McGill really surprised me in his ability to drop time from his 51.6 in 2010. Reason being that at the time he was already the #4 performer ever in textile (behind crocker, phelps and serdinov). That said, he has already been 51.9 this year, which to me suggests he’s probably not going to stagnate in the 51.2 for that much longer.

I would not be surprised to see a sub51 from Tyler this summer.

Braden I think you have it wrong on you’re mens list , Tyler has that man strength that has recently kicked in . I don’t think Tim can beat him at trials and honestly I think it’s going to be incredibly close between him and Phelps .

No way it’s going to take 51s to final in the trials.
That is way too fast.

I think in Omaha next month, the 8th place will be 52 mid-low

I totally agree with your vision here Mel . Vollmer is the faster 100 butterflyer in Us right now and probably in the world . Very interesting point about Lochte for the 100 fly . I remember his butterfly anchor on the Us 400 medley relay in Dubai world short course championships : just owesome speed . thanks to his anchor , the Us won that race ….it will be interesting to see if he goes for that one .