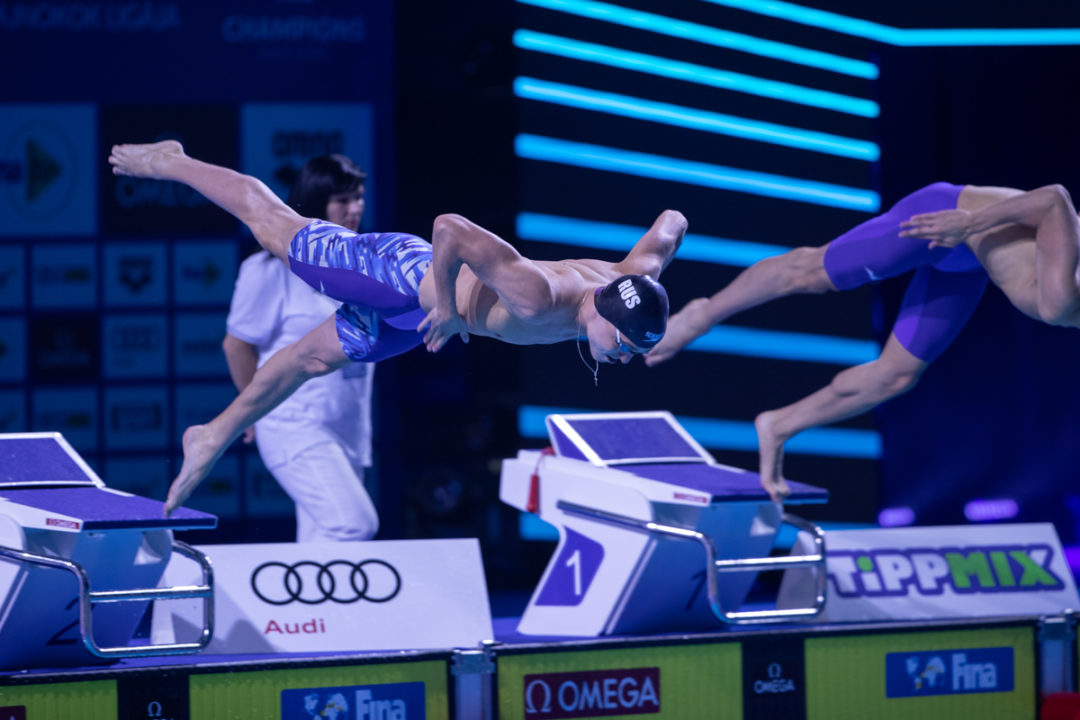 In case you missed it, check out the top 5 swims from this year's Military World Games, which wrapped up from Wuhan, China earlier this week. Archive photo via “Rafael/Domeyko Photography”

The pool swimming portion of the 2019 CISM Military World Games concluded today in Wuhan, China, but not before the host nation ran away with an impressive 49 total medals, including 27 gold, 14 silver, and 8 bronze. The next closest nation in the rankings is represented by Russia, who snagged 27 total medals, including 7 golds, while Brazil finished 3rd in the medal table with 19 total pieces of hardware.

In case you missed any of the action, here are my top 5 swims from the competition.

The men’s 200m IM saw 2 impressive performances by Chinese swimmers, with both Wang Shun and Qin Haiyang knocking down 1:56’s. Wang topped the podium in a 1:56.25 scorcher, with his time here in Wuhan falling only .09 outside of his own national record of 1:56.16 from the 2017 Chinese National Championships.

Wang took bronze in this 200m IM at the 2016 Olympic Games, registering an effort there in Rio of 1:57.05. His 1:56.25 gold here would have garnered him the silver medal in Gwangju, Korea at this year’s FINA World Aquatic Championships.

For the early-season rankings, teenager Wang now tops the world with her outing this evening in Wuhan.

Russia’s World Champion Anton Chupkov was unstoppable in this men’s 200m breaststroke, beating the field by just under half a second.

Chupkov raced his way to a monster new lifetime best mark of 2:06.12 to claim gold in this event in Gwangju, establishing a new World Record in the process. This effort here in Wuhan would have placed 6th in that final.

Russia’s national champion in the men’s 100m free, Vladislav Grinev, turned up the heat in the event in Wuhan. The 23-year-old nailed the only sub-48 second time of the field, stopping the clock at 47.86 to take gold in a new meet record time. His performance overtook the previous meet mark of 48.25 held by Brazil’s Pedro Spajari since 2017.

Grinev was the bronze medalist at this year’s World Championships in Gwangju where he touched in a time of 47.82. That was well off his lifetime best of 47.43 logged at the Russian National Championships earlier in the spring.

However, Grinev’s time overtakes teammate Vladimir Morozov’s 47.99 from the FINA World Cup circuit to land atop the 2019/20 season world rankings.

French national record holder Fantine Lesaffre showed the women’s 400m IM final who was boss, busting out a 4:37.91 performance to top the podium. The 24-year-old routed the field by almost 7 seconds.

Lesaffre holds a lifetime best mark of 4:34.17 in this event, which was set when she won gold at the 2018 European Championships. She didn’t fare as well at this year’s World Championships, where she finished 8th in the final in a much slower effort of 4:39.68. In fact, her time here tonight would have bumped her up to 6th place in that Gwangju final.

Lesaffre’s outing tonight now checks the French swimmer in at #5 on the current world rankings in the event.

How come a 17-year-old was swimming in a “military” event? Don’t they have a minimum-age requirement? I mean, if you participate in a military event, you are a part of the military and at least in theory should pick up a rifle and fight in a war when ordered. It’s just wrong to have anyone under 18 in the military.

For DECADES the USSR put its world class (professional) hockey team in the Military — where they violated all norms of what was then considered ‘amateur’ sports. Of course, their military service consisted in showing up for practice and games. It may very well be the same for many of these athletes – 17? many countries have 16-year old volunteers in the military (Russia, Bolivia, Iran, Singapore, etc.)

In some countries, one can attend the “Military Academy” in place of regular high school -similar to private/prep schools in USA. It is a pre-cursor to the college level military academy, leading to the military career.

in some countries there are specialized sport academies…

200 Brst is stupidly deep at the moment. What an absolute mess of an event.