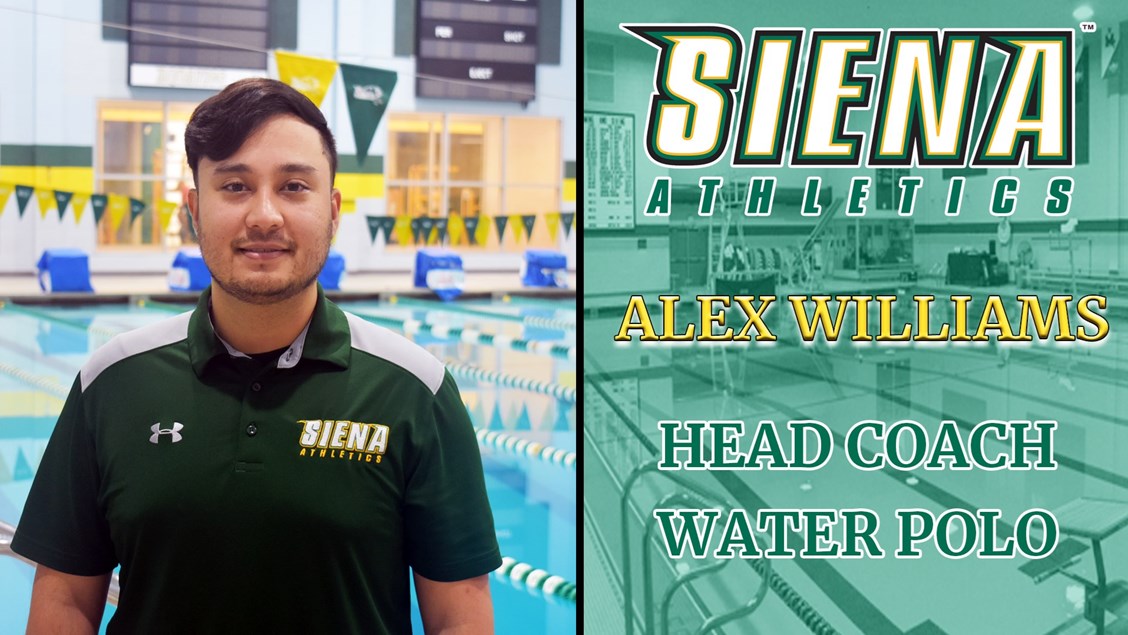 Alex Williams joins the Saints after having spent the previous year as an assistant coach with both the Iona College Men’s and Women’s Water Polo teams. Current photo via Siena Athletics

LOUDONVILLE, NY – Siena College Vice President and Director of Athletics John D’Argenio has announced the hiring of Alex Williams as the seventh head coach in Siena Water Polo history. The San Diego, California native joins the Saints after having spent the previous year as an assistant coach with both the Iona College Men’s and Women’s Water Polo teams.

“We are excited to have Alex join the Siena family as our water polo coach,” D’Argenio said. “He made a great connection with our student athletes when he visited, and has laid out a strong plan for helping our team advance.”

Williams matriculates to Siena from fellow MAAC member Iona. This past spring, while working under the direction of longtime head coach Brian Kelly, Williams helped guide Iona to 16 wins and a victory in the MAAC Tournament Consolation Game. Three Gaels earned All-MAAC honors during his tenure, while eight were named to the MAAC All-Academic Team and 11 were recognized for their academic success by the Association of Collegiate Water Polo Coaches.

“I am humbled to be entrusted with leading the Siena Water Polo Program,” Williams said. “I realized quickly during the interview process that the players and the athletic department were hungry to build the program the right way. I’m grateful to AD John D’Argenio and Associate AD Andrew Santandera for the opportunity, and I’m looking forward to teaching our current and future student athletes what it means to ‘honor the process.’

Prior to his time on the East Coast, Williams served as the head coach of the boys and girls water polo teams at Torrey Pines High School in San Diego from 2013-2018, guiding the girls to the CIF San Diego Section Open Division Quarterfinals in 2017 and the boys to the Division I Semifinals the following year.

Working under the guidance of Doug Peabody and Tim Reed, he also coached the San Diego Shores Water Polo Club team for three years, serving as the head coach for the girls’ 18U “B” team and an assistant for the “A” squad. Shores earned a silver medal in the 2017 Junior Olympics Gold Division.

Williams’ coaching career began while attending the University of Arizona, where he served as an assistant to the women’s club team in 2009, and as its head coach in 2010.

Williams was a four-year member of the club water polo program at Arizona, and served as its president from 2009-10. He was named to the Collegiate Water Polo Association Southwest Conference First Team in each of his final two seasons, and was an Honorable Mention selection for the 2009 CWPA All-American Team. He earned bachelor’s degrees in Marketing and Accounting from Arizona’s prestigious Eller College of Management in 2011.

Williams takes over a Siena program that posted a 9-23 record last season, which tied for its best mark since 2011. The Saints are set to return six letterwinners from 2019, headlined by three-time Second Team All-MAAC honoree Diana Fernandez.

Entering her senior season, Fernandez became the first Saint in program history to garner an All-America Honorable Mention Nod from the Association of Collegiate Water Polo Coaches, doing so during her junior campaign.

Siena Water Polo will enter its 19th year beginning in February 2020, with next year’s schedule set to be announced soon.