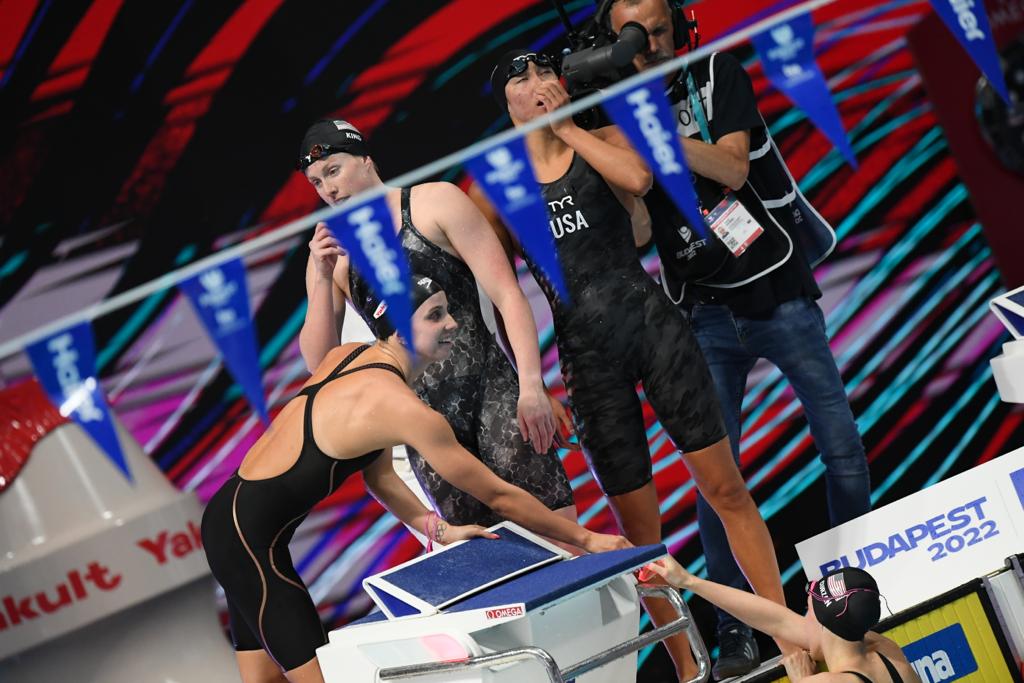 Despite finishing seventh in prelims, the United States roared back to take the win in the finals of the women's 4x100 medley relay. Current photo via Fabio Cetti

Despite having to swim out of lane one due to a questionable prelims performance, the United States won the women’s 4×100 medley relay, with Regan Smith, Lily King, Torri Huske, and Claire Curzan combining for a time of 3:53.78 to out-touch Australia and Canada.

The “big three” backstroke trio of Kylie Masse, Regan Smith, and Kaylee McKeown got their respective countries out to early leads at the 100-meter mark. Although none of them broke 58 seconds, it was Masse who touched first in 58.39, beating Smith to the wall by 0.01 of a second. Her time was an slightly improvement from her individual 100 back swim, where she took second with a time of 58.40.

On breaststroke, Lilly King shifted the race in America’s favor with her 1:05.89 split. This is a major improvement from the 1:06.79 she went on in the prelims of the mixed medley relay. After nearly failing to make the individual 100 breast final earlier this meet, having the fastest time in the field on this relay was a moment of redemption for King. However, Jenna Strauch was also not fair behind, dipping into 1:05 territory with a 1:05.99 time to push the Aussies from third to second. Now that Australia has two breaststrokers that can go 1:05-point on relays in Chelsea Hodges and Strauch, they have one less stroke to worry about when it comes to medley relay depth.

Louise Hansson recorded the fastest fly split in the field, going 56.38 to move the Swedes from sixth to fourth place. Torri Huske split 56.67, over a second off her best time of 55.64 set in the 100 fly final. However, this was Huske’s sixteenth race of the meet, and to be able to record the second-fastest split of the field towards the end of a very heavy schedule is very impressive.

Defending Olympic champion Maggie MacNeil, who is only swimming her second 100-meter fly since the Olympics, clocked a split of 56.80. It’s clear that she’s still recovering from her elbow injury, hence why she’s only swimming relays at this World Championships. However, she was still much faster than her prelims split of 57.23. Brianna Throssell had a split of 57.19 for Australia, just a few tenths off her best time of 56.96.

100 free world champion Mollie O’Callaghan had the fastest freestyle split of the field with her with 52.30, but it was not enough to overtake the United States, who had Claire Curzan splitting 52.82 on anchor. Penny Oleksiak and Sarah Sjostrom split 52.65 and 52.66 respectively, but could not move their countries of Canada and Sweden up a place.

As of these Championships, at least prior to the very first day of races, it should have been a no contest in favor to the USA given the big gap between King-Strauch and Huske-Throssell.
Then King struggled throughout the week (dealing with COVID, am I wrong?) and Huske went one second slower than her individual time probably due to her crazy schedule and Australia almost closed the GAP cuz thir free leg is way better. But overall it didn’t give any indication towards Paris as there were both people pretty off their best (King, Smith, McKeown) both huge absentees (McKeon, Campbell sisters, I would say Manuel and Jacoby too).
It’s still 50-50 to me as Paris is rolling by

I agree with this. US is historically more successful because they tend to have a few different people they can rely on in each stroke where Australia is more reliant on its stars being a much smaller country. I would say its a toss up but history tells me US women are more likely to win.

Hopefully between now and Paris one of Canada’s current or perhaps new emerging breaststroke 100 swimmer can can split at least middle of the pack. We had a couple dabbling in the mid 106 but they have become inconsistent. Wog in particular seemed to have a couple of good performances over the last couple of years but then has faded a bit at 100. Her 200 br has rebounded a bit and she took 4th here. Unfortunately she swam over 108 in the prelims medley relay. They went with Nichol who did go mid 106 but that is a few years ago . She made final at 2016 Olympics finishing 5th. This years trial winner ( in a slowish 107… Read more »

USA was dominant in breast for quite a while. King and Jacoby are both a little weaker than King was at her peak. Aus seems to have caught up very slightly with Hodges and Strauch being good, but not outstanding, at the 100. But yeah, Canada really needs a breast leg. They are even with US and Aus in back. They are first in fly and second in free. But the breast deficit is just too big to make up at this stage.

I realise Japan did not even send a team?

Kaylee McKeown needs to up her relay game. Has she ever come first in a relay leg?

Actually, yesterday …. in the heats of 4XMED. Of the 4 relays finals she has swam at World/Olympic level; 2 have been MMR so you could not rationally expect her to be first on the wall in those. In both, she was the fastest female backstroker.

Whilst it would be nice to see her be the fastest on her split of 4XMED; it has to be acknowledged that this race comes at the tail end of the program when she, and many others, are nearly running on empty. She also has a heavier program than either Smith or Masse. Whilst it would be preferable that she hand over a lead, the reality is that she and her 2 peak rivals… Read more »

it’s just that American relay magic. McKeown is excellent in the individual obviously with the fastest 2 times ever, but Smith has two relay leadoffs sub 58 already while McKeown still has not done that

McKeown needed to be faster. It was over at that point, IMO, and obvious why she didn’t swim the individual 100. No early speed all week other than the 50 final.

As an American I wasn’t worried about O’Callaghan’s rally. That is the worst possible style when you are already .99 behind. Soon you’ll be further behind…with no mathematical chance. Contrast to somebody who takes it out fast the first 50. They change things in a hurry, with adrenaline carrying them further as the leader senses pressure and tightens up.

Kaylee wasn’t planning to go to worlds at all until very recently. The fact that she didn’t prepare properly for worlds and that 3 of our other legs were missing our best, silver by 0.47 is remarkable and much better than expected.

Other than a couple of very early season times, McKeown’s backstroke has been significantly below her 2021 levels and its clear that the greater focus on IM has had some impact.

Whilst AD’s point has some validity in that the earlier pressure MAY panic the then frontrunner; the counterargument is that the fast starter often over-revs and runs out of juice themselves.

I also think that, aside from her differing racing MO; as a relay finals rookie we are quite probably not doing her justice by comparing her to the Campbell’s and McKeon who just happen to be the 3 fastest ever 100 free splitters in history. She is NOT yet at that level; indeed she may/may not reach… Read more »

I don’t think that explains it, because her 2IM was slower than last year. If her backstroke is suffering from IM training, you would expect her IM to have improved significantly.

She literally said in an article during trials that she wasn’t going to be near her best because she wasn’t expecting to participate, and that this year is about preparing for Paris.

Her 400IM did and it seems there was some focus on that event. Whilst she didn’t hit her 200IM PB, her silver time was ball-park for her other 2021 outings in that event.

She may/may not have been uncertain for some time as to whether she was swimming Worlds or not but the fact remains that she swam most of the lead in meets to Trials and clearly continued to train as if she were.

What I will fully concur with it that this was clearly a year for experimentation/tinkering with her racing program to see both where she stands internationally in those event but moreso are such extensions compatible with her existing races and relays.

Your hatred of Australian swimmers is pathological. It’s even reflected in your name. “Awsi” is clearly “Aussie” and “Dooger” is slang for fecal matter. If I were to conjure up a similarly poorly disguised derogatory name for the Americans, I highly doubt that any of my posts would make it past the moderators.

If only the Swedes had a backstroker

I mean… They do have two sub-minute backstrokers, they just happen to be better at other strokes 🙁

If Coleman was there, her PB would’ve got them on the podium!

Happy with the silver for us aussies here considering we were without McKeon and Cate Campbell for the last 2 legs — was actually expecting bronze tbh, since the Canadians had a killer team on paper.

Super impressed with Jenna Strauch during these championships – what a pleasantly surpising form she’s shown. Stoked that we have a reliable breastroker now for relays. Been slim pickings for us since Taylor Mckeown was at top level 6-7 years ago.

Always one of the most exciting races 👏

McKeown Sr was always primarily a 200 performer. The reality is that W BRS has been problematic from a 4XMED standpoint since Jones’ retirement in 2012. It certainly pleasing that both Hodges and Strauch appear to have at least remedied that situation to the extent that they are not haemorraging multiple seconds.

Funny we say there is a Breastroke problem, when Australia had the 2nd fastest split here and in Tokyo!!!

It’s a problem from the perspective that Australia is chasing gold in this relay. Canada also has a big breaststroke problem, so it’s not saying much that Australia is doing better than them in this respect. The other countries don’t have competitive medley relays.

Agreed…just weird how it has been framed as a national emergency, when Hodges and Strauch actually managed to be the 2nd fastest splits!