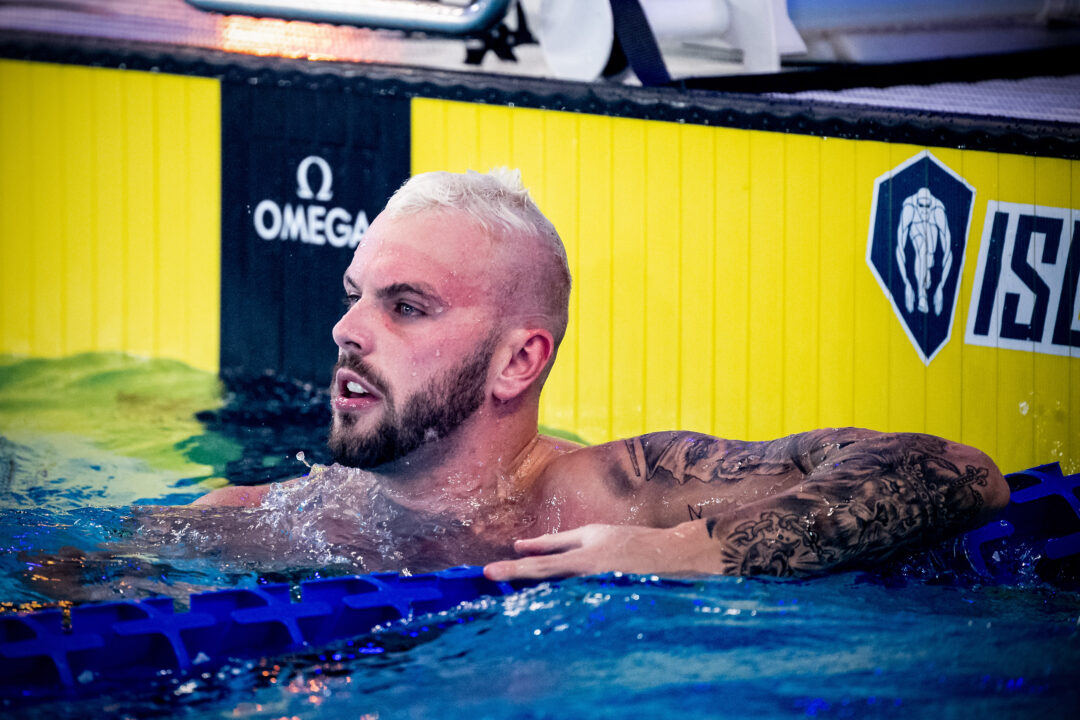 Even though he didn't medal individually here in Budapest, Chalmers helped Australia earn medals in two out of the three relays that he swam on. Archive photo via Giorgio Scala

With Kyle Chalmers only swimming “off” events at the 2022 World Championships such as the 100 fly, many thought that his presence at the meet would be minimal. Instead, he produced the fastest split out of the field in three different relays and helped Australia medal in two of them. That being said, not many swimmers have the same impact on their country’s relays the way that Chalmers does with Australia.

In a depleted meet where many of Australia’s stars were missing, the three 46-point splits that Chalmers produced on the men’x 4×100 free relay, mixed 4×100 free relay and men’s 4×100 medley relay were part of the reason why his country was able to medal in seven out of the eight contested relays and finish no worse than fourth in any of them.

Australia’s Ranking Before vs. After Chalmers’ Leg In Each Relay:

As you can see from where Australia was before and after Chalmers dove in, it is clear that he was a huge boost for his team. In the men’s 4×100 free relay, he erased the 2.06 second deficit that the Aussies had behind the United States at the 300-meter mark to one of just 1.46 seconds and helped his country secure silver. In the mixed free relay, his 46.98 split helped Australia overtake the United States and allowed Madi Wilson and Mollie O’Callaghan to extend upon his lead in the second half of the race. And while Chalmers just fell short of a medal in the medley relay, he brought down the gap between Australia and bronze medalists Great Britain to just 0.5 seconds at the finish when it was 1.06 seconds at the 300-meter mark.

Even though Chalmers wasn’t giving Australia medals individually this time around, his will always find a way to help his country, as seen through his relay efforts.

Did he get stuck in the sun with a reverse Batman mask on?

I wouldn’t carve the “she doesn’t need to necessarily swim as many relays” in stone just yet as we really have no idea just where McKeon is at form and condition-wise. The only potential “deletions” that I can identify are W4XMED and MMR, and that could automatically change should McKeon’s form show that she is NOT the no1 AUS W 100freestyler.

I would agree that wherever possible, she gets a leave pass for relay heats. As for session crossovers:

In all honesty, the paper thin depth of CG fields bear no comparison to Worlds so heats and semis should be effective… Read more »

Is there any young Australian swimmers who make the medley relay in time for Paris. The women probably need better breast could use another butterfly leg also. Men need a backstroke ASAP, and hope ZSC gets better at 100m breast. Would love to see Chalmers with a genuine chance to chase down a gold medal .

Cooper looked promising last year, seems a little off this year. He’s still a teenager so hopefully by Paris he will be more competitive.

Overall I am very happy with the Aussie team performance

On the last night specifically I am more than satisfied that Harris secured a medal in the 50m free which is always a lottery for Australia .. just sad the men couldn’t overcome GBR in the medley relay given Peaty was missing so that’s their best chance to get ahead of Britain but still couldn’t overcome them .. we desperately need a sprint male backstroker and breastroker for Paris 2024 as I am guessing France will also step it up on home soil

Australia was one place away from medalling in all relays- a testament to the depth of the Australian (and obviously US) team.

I may be wrong, but I feel like the women’s 100/200 breaststroke times at the international level seem to rapidly progress then regress in such a short amount of time almost in a cycle. Any reason as to why this is? It seems like the most blatant outlier out of any other of the strokes/events by men or women. It’s just interesting to me from a statistics perspective.

There will no doubt be a full analysis article of the AUS performance posted soon but this is my “first impressions” general overview. Of course, specific areas will most probably see their own articles and threads.

Given who the absentees were; a general downgrade of medal counts/expectations was not only realistic but necessary, even more so with others swimming limited or altered programs. The final medal count was probably an “Exceeds Expectations”.

I cannot really identify any outright “misses” and if anything there were a couple of unexpected “overperformers”; notably Strauch and arguably both male freestyle relays snagging silvers. One can also add the “one in/one out” cases in W50FR/800 where a forced withdrawal by a medal possibility was… Read more »

Will Cody Simpson provide some needed depth for the 100 fly in the years ahead? He seems to have the talent and work ethic to make that happen.

Jury’s out. Its extremely commendable that he’s got as far as he has but …. 51high is at best semi-finals level at the top level. Its quite plausible that he could make the 100fly final in Birmingham but the depth of that field is shall we say …… paper thin.

Should he get down close to 51flat then, certainly, he would be valuable depth and a realistic option for 4XMED heats. The question is just how long is he likely to stay around. Should he hit the road post Paris, as he has every right to do so, then the long-term problem remains.

Good analysis. I would classify the W4X200 as a miss. Only Neale swam to expectations. I know MOC was under pressure to do something dramatic given the big USA lead but I think she would have done better to stick to her normal strategy. If she had exploded off that last wall and started closing the gap, it might have caused Sims to tighten up and it could have ended differently.

Cooper came 7th in the 100 back actually.

My bad. didn’t realise the DQ was overturned somehow when I typed this.